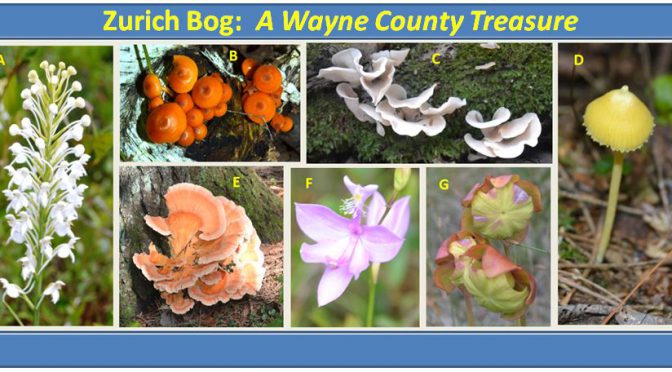 There are no rocks, no minerals, and unless there are buried mastodons, there are no fossils.  But that does not mean that Zurich Bog is not an interesting place for a retired geologist to spend a few hours while remaining near home during this summer of social distancing.  The small protected wetland preserve is just 8 miles north of Newark and 7 miles south of Sodus, almost smack in the middle of Wayne County, New York.

Trapped between two north-south trending drumlins, the wetlands and central bog are generated where groundwater entering the valley upwells towards the surface from a deep-seated aquifer.  However, there is insufficient water influx to form a standing lake or pond and the protected valley conditions combine with the groundwater to permit extensive covering vegetation (mostly Sphagnum moss) to develop and flourish.

Bedrock geology plays a role also.  The bog and the glacial drumlins rest on Lockport Dolomite, the same formation we visit and pound on at Walworth Quarry just a few miles to the west.  This limestone buffers the pH of the groundwater preventing the development of truly acidic groundwater that is often associated with bogs.  For this reason, the flora of the small preserve in central Wayne County is unique and Zurich Bog was established as a registered National Natural Landmark in 1957.  The land is owned and maintained by the Bergen Swamp Preservation Society.

The sphagnum moss-covered bog is at the north end of the preserve and a two-mile loop trail crosses multiple ecosystems including bog, fen, and wetlands.  There is even a small central raised drumlin running across the center of the preserve and yes, there are a few rocks (glacial erratics) to be seen in the root balls of fallen trees.

But the site is best known for its flora.  In mid-July, several species of rare orchids blossom, and over 500 different species of fungi and mushrooms have been documented in the relatively small 650-acre preserve.  The bog itself is also home to Pitcher plants, those carnivorous plants that trap unsuspecting insects who are then dissolved in the acidic fluids within the plant.

I’ve been there three times, all with local experts in the bog’s flora.  Orchid-viewing season has passed for 2020, but September is best for mushrooms and fungi.  It is, however, a nature preserve.  The Bergen Society asks visitors to contact them first for permission to enter the preserve.  Their main message is for folks to stay on the trails, particularly in the regions with boardwalks, to stay off the central bog (first for your safety, second for the bog preservation), and to leave the flora and fauna as you found it.