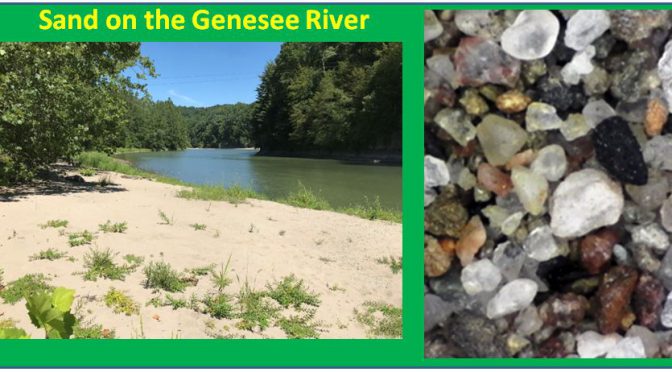 The Genesee River ends in my hometown of Rochester, New York completing a 160-mile journey from Potter County, PA.   During its course,  the river falls some 2250’.  Several notable waterfalls mark its journey north.

If you read my blog, you might know that I have become an arenophile, or more simply, a sand collector.  In that endeavor, I have started to collect sand along the path of the Genesee River as it crosses across mostly rural farmlands and suburban communities.  Rochester is the only major city graced by its presence.  The surficial geology is mostly glacial deposits (moraines, outwash, etc.) of highly variable composition, but the river also cuts into Paleozoic sedimentary rock below that is Pennsylvanian to Ordovician in age, a rock record of about 140 million years.   The major waterfalls mark resistant limestone and dolostone units; intervening shale units less resistant to erosion generate gentler topography. 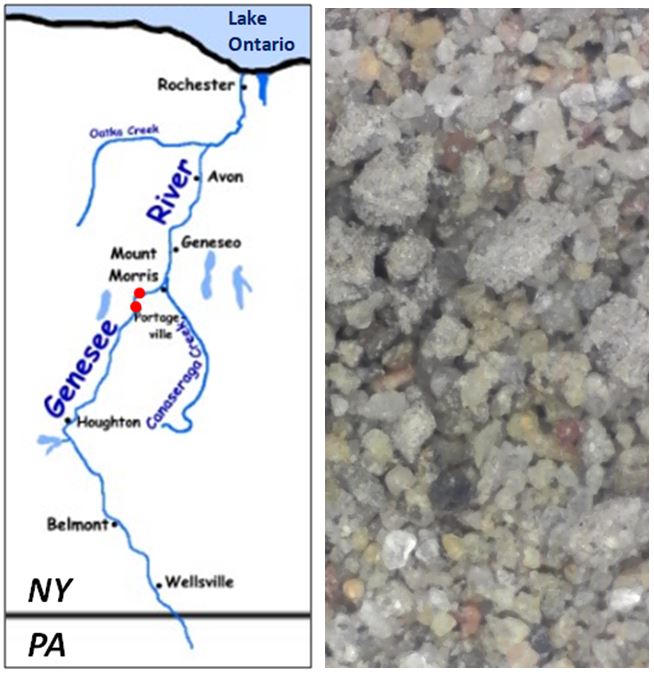 The northern half of the Genesee River is in western New York. On the right is fine-grained quartz-rich sand from near Portageville, NY, the southern of the two red dots on the map to the left. The field of view is 4mm from top to bottom.

I started my collecting this August with two samples near Portageville, NY, or about the middle of the river’s journey (red markers on the map).  The southern of the two samples was fine sand resting in depressions on Upper Devonian bedrock exposed along the river’s edge.  This sand was fine-grained and well-sorted.  It was dominated by quartz, but there were several small garnets as well.

The second sample was less than 2 miles downstream, but below all three major waterfalls within Letchworth State Park, or 380’ lower relative to sea level.  This sand, from a large sand bar alongside a major bend in the river, was coarser than the stranded sand above the falls and clearly reflected the varied source rock within the river’s drainage area.  There was lots of quartz, but also dolostone fragments and some mafic mineral grains.  There were even a few garnet grains that must have been sourced from glacial deposits the river had eroded. 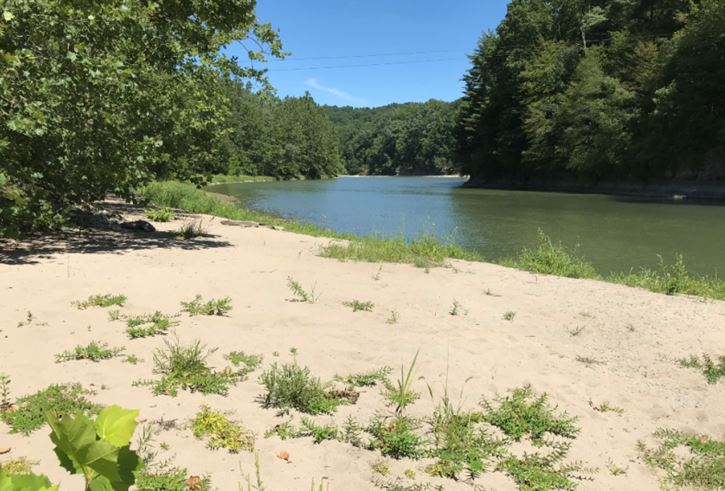 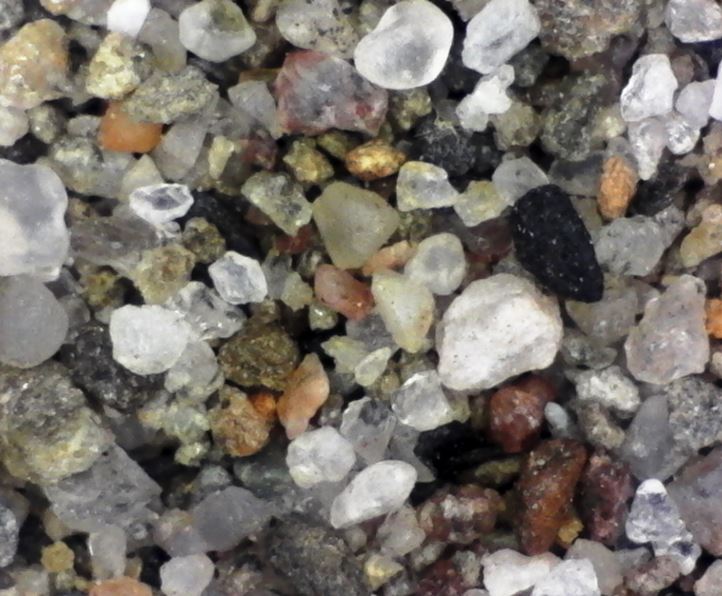 Sand from the second site is medium-grained. Some quartz grains are subrounded, others are more angular. A few appear to be frosted. There is a significant variety of other minerals present also. Note the pink transparent garnet grain in the upper center. Some, but not all, of the black opaque grains are magnetite. The field of view is about 5mm across.

When time permits I hope to visit the headwaters of the Genesee River in Pennsylvania and other locations along its course.  The river has also changed course over its history, most notably near Rochester and in response to the retreating glaciers some 10,000 years ago.  This provides additional sand sampling opportunities.  But that is a story for another day.