Marion Wheaton, WCGMC co-founder along with her late husband Jim, passed away last month at the age of 89.  She is survived by her daughters Nancy and Diane, her sister Barbara, her brother Paul, many nieces and nephews, and by a host of WCGMC rockhound friends.

In addition to being a co-founder of our club, Marion served as Editor of this newsletter for many years.  Marion and Jim volunteered many hours displaying and educating young and old all around Wayne County and beyond with their mineral collection and Mastodon bones.  Her daughter Diane tells us that Marion was buried with a Herkimer diamond, her Wayne County Gem & Mineral Club pin, and a beautiful pink rhodochrosite brooch necklace she always wore.

Her full obituary can be read here.

As a tribute to Marion, I am inserting into my blog an article Marion helped write for the July, 2008 WCGMC newsletter.  It is the story of the Pirrello Mastodon discovery that led to the formation of the Wayne County Gem, and Mineral Club.  Pat Chapman helped Marion chronicle the events of 1973 that directly led to the creation of our club a year later.

In the spring of 1973, George Fisk of Marion, NY was cleaning a drainage ditch on the celery farm of John Pirrello in the Town of Arcadia, Wayne County, just a few miles north of Newark, NY.  He noted the large bones as he dug, but thought them possibly to be from a very large horse.  He did not reveal his find to anyone until the last week of August 1973 when he was refueling.  My husband Jim was also refueling his tanks.  They both worked for Claude J. Nevlezer, Inc., and George agreed to show Jim the bones.

Jim told George that the bones must be from a huge animal many years ago and that he could take them to the Lakeshore Gem Club meeting as John Lenhard of Hannibal, NY could identify them for George.  George took Jim to the spot where he had seen the bones in April 1973.  They found many bones on the ground and picked them up.  Jim took the bones to the Gem Club meeting and John Lenhard identified them as from a MASTODON.

George was NOT interested in the bone find, so the following evening, Sept. 10th, Jim and I went to see John Pirrello, the landowner, to tell him what the bones were.  Jim asked permission to dig for more bones.  Mr. Pirrello told him to go ahead and he could have whatever bones he found.  Jim and I and our daughter Diane went to the site on Sept. 11th taking a photographer, Les Buell, of East Williamson, NY with them.  Les is a member of the Wayne County Historical Society.  He had previously viewed the bones at the Wheaton home.  He phoned Marjory Allen, county historian at the Wayne County Museum in Lyons, NY to tell her about the find.  She asked if he would take photos of “an actual Mastodon dig in Wayne County” as it would be a first-ever done. He took many photos.

Jim Wheaton found 12 rib bones, [one being the largest rib found at that time of a Mastodon].  He also found a huge rear ankle bone and toe bones that State Scientists [who were brought to the site to do excavating] first thought were from a Mammoth. When  Mr.  Pirrello phoned the  NY  State  Museum about the bones Jim was asked to stop digging, as the state has its own way to dig bones.  When Dr. Edgar Reilly, Zoologist from the State Museum came to view the bones found by the Wheatons, he noted how large they were and so well preserved.  Immediately a major dig for more bones and soil testing was planned. A zoologist, biologist, archaeologist, paleontologist, and workers came from the State Museum.  October 2nd to 4th soil samples were taken. Carbon-14 tests were done afterward on the bones and soil.  A coring preparer was brought in for soil samples.

A bulldozer from NYS DOT was brought in to take off the upper layer of muck. It became mired in the marl [limy clay] layer. On Oct.23rd, 1973 with the bones exposed, scientists came to work for two weeks on a major dig.  Four cervical neck bones were found nested together, 4 ribs & fragments of others, a thoracic spine vertebrae, and fragments of others.  I went to the site every day to watch.  On Oct. 27th, several days of rain commenced and the dig ended.

Reilly revealed details on the Pirrello Mastodon. Carbon-14 tests told that the mastodon died 10,340 years ago, plus or minus 170 years, in the year 8,390 B.C.  He was equivalent in age to a man in his late 40’s. and was probably 10 ½ feet to 11 feet tall.  One left rib was broken, possibly fighting with others in the herd.  He likely suffered severe pain before his death.  Maybe a “loner” who had left the herd?  Perhaps in the spring he fell thru the ice of glacial Lake Dawson & drowned.  Dr. Reilly said other bones not found may have drifted in the area. 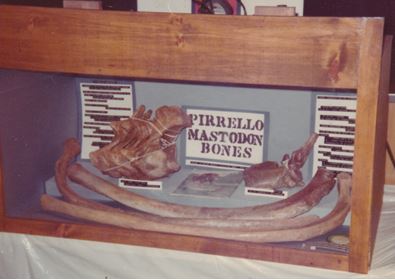