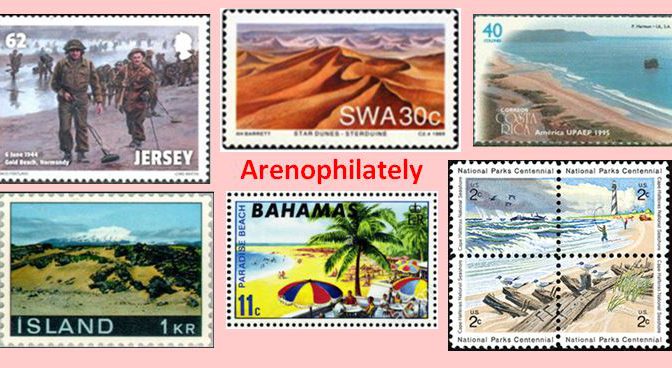 I wrote this article for the Spring 2020 issue of Philagems, the newsletter of an International Group of stamp collectors with an interest in “Gems. Minerals, and Jewelry on Stamps.”

I have a confession to make.  I have become an arenophile.  Fortunately, in many places it is not illegal (unless trespassing while doing it), and it should not be harmful to my health.  I would say it is generally not contagious, but I did catch it a year ago when introduced to the hobby at a local rock club meeting.  I did not realize I was hooked until the summer of 2019.  While collecting minerals on trips in Maine and Michigan, I kept my eyes open for sands to collect and proceeded to fill quart freezer bags at a few dozen locations along lakes, rivers, and from glacial deposits.  You see an arenophile is a lover of sand.  The word is derived from the Latin “arena” (sand) and the Greek ”phil” (love).

But this is a philatelic newsletter, what does this have to do with stamps, and more specifically minerals on stamps?  Well, sand is nothing more than a pile of mineral grains, and there are certainly many worldwide postage stamps depicting sand.  The most popular thematic stamps depicting sand are, of course, beaches, like several of those depicted in the header.  But there are also river sands, land sand, and wind-blown sand dunes such as those on this South-West Africa (now Namibia) stamp, also in the header.  Why not collect and display sands from various beaches next to stamps showing these beaches?  And why not call it arenophilately?  Would this not be a reasonable offshoot of a group specializing in minerals on stamps?  There are actually some very unique and beautiful minerals hidden in the sands of the world.

How about this for starters?  I recently acquired sand from Cape Hatteras, North Carolina, specifically from the beach in front of the Cape Hatteras lighthouse.  This beach and the famous lighthouse were featured on a 1972 set of four 2 cent United States stamps.

The sand is a typical fine-grained quartz-rich Atlantic Ocean sand.  The grains are sub-rounded and the sand is well sorted.  But if you look carefully, you can see a garnet grain (yellow arrow in the lower-left).  Some of the quartz is very clear while other grains are iron-stained.  Incidentally, the same Cape Hatteras lighthouse was featured in the US lighthouse stamp series in 1990, but I digress into another topical group with that comment.

The beaches of the Caribbean are favorite vacation sites and many of them have also been featured on postage stamps.  I have not visited any of these sites since becoming afflicted with arenophilia, but there are several Facebook Groups comprised of arenophiles who trade sands through the mail.  Within the US this is typically done using the small USPS boxes to send 20-30 ml packets of sand to fellow arenophiles.  I’ve done this several times this fall and have acquired many worldwide sands in exchange for sands I have collected on trips this past year.  Included among the sands I have acquired are several that I can link to postage stamps.

Almost 50 years ago, in 1970, Bahamas featured Paradise Beach as one of a set of four stamps featuring tourism in the Atlantic Ocean island nation.  My sand sample, obtained in a trade, is from Cabbage Beach, less than 1000m east of the beach that is depicted on the stamp.  OK, most of the grains are shell fragments and not weathered mineral grains, but they are calcite.  Fortunately, Paradise Island and its highly visited beaches were spared the worst when hurricane Dorian made landfall and stalled over Abaco and Grand Bahama.

Playa Hermosa on the Pacific Ocean in Costa Rica was featured on a stamp issued in 1995.  The beach is a famed surfing beach with black sand from the basalt that dominates the mountain provenance region.  My sand sample from a recent trade also contains white shell fragments and a bit of quartz.  The field of view is 5mm across.  I am not sure why the stamp seems to suggest a red beach.

I live near Lake Ontario in Rochester, NY and spent last summer and fall collecting beach sands along each of the Great Lakes.  As luck would have it, the high water levels in Lake Ontario exposed and re-distributed heavy sand horizons, spreading garnet and magnetite-rich sand across the beach when the water level dropped.  The red sand is very attractive in the field and it is a popular trade sand for other arenophiles.  I have not yet found garnet-rich sand on a postage stamp, but I continue to look.  But, the Great Lakes are indeed interesting and there is at least one with an equally interesting stamp.

The $24.70 Sleeping Bear Dunes stamp issued in 2018 is the highest denomination stamp that the US had issued up to that time.   Sleeping Bear National Lakeshore is just south of similar dunes that I visited and sampled this summer along the eastern shoreline of Lake Michigan.  Sands in beaches and sand dunes along the Great Lakes are typically more diverse in their mineralogy than many ocean beaches.  In this medium-grained sand from near Charlevoix, Michigan you can see several darker grains.  Some are garnet, others are magnetite.  Some of the quartz grains are frosted, evidence of the abrasive environment during aeolian transport.

I’d love to acquire sand from the beaches depicted from Estonia (Eesti) or from onshore dunes like those highlighted on the stamps from Botswana and Lithuania (Lietuva). And, there are many more.

There are also historic and sometimes infamous beaches around the world.  Beaches where historic battles were fought or where invading armies made landings.  Many of these battles and beaches have been featured on stamps. I have just traded for sands from four of the famous beaches along Normandy in France, sands from Gold Beach, Omaha Beach, Utah Beach, and Juno Beach.  The sands are actually rather ordinary, they are fine-grained sands with good sorting of quartz grains with a shell component.  But the historical significance of these beaches is far from ordinary.

By definition, sand is inorganic, granular material composed of finely divided rock and mineral particles ranging in diameter from 0.06 mm (fine sand) to 2.0 mm (coarse).   But, arenophiles often expand that designation to include colorful clays or silts smaller than 0.0mm in size or gravels or even cobbles, the terms used to define granular material a bit larger than 2.0 mm.  Extending this definition allows for collecting from stony beaches from places like the basalt beaches surrounding Iceland.  My son visited Iceland this winter and brought home a small bit of basaltic beach sand from just outside Snæfellsjökull National Park.  The volcanic rocks from the park had been featured on a stamp way back in 1970.

The glass vial of basalt holds 20ml, the amount I collect.  The 2” by 3” resealable bags are often used when trading.  In the United States, about 20 of these bags can be carefully packed and shipped in the Flat Rate USPS shipping box for $8.30.  It costs more to trade to Europe or elsewhere, however, much more exotic sands are possible in exchange.

If I graduate from simply being a sand collector to actually scientifically studying the sands I obtain, then I will no longer only be an arenophile.  I will also be a psammologist.  I kid you not.  Look it up!

Note:  The microphotographs in this note were captured with a simple and inexpensive zOrb digital microscope.  They are not high quality, but I capture at least one for every sand I collect or acquire by trade.  Collectively, they demonstrate what all arenophiles know: that no two sands are alike!