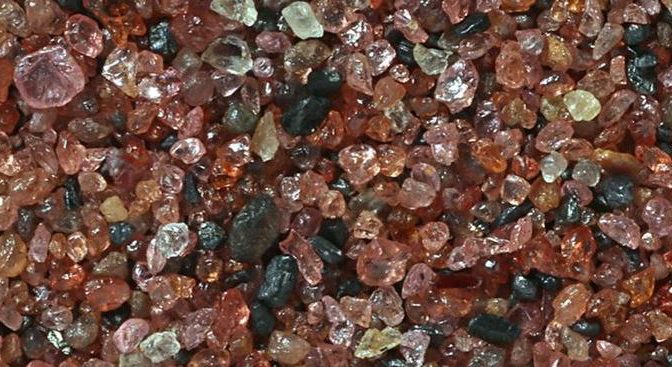 In early 2020, I was comfortably sitting in my man cave planning a September trip to collect beach sands along the coastline of southern New England.  While cruising along the shoreline using Google Maps satellite images I spotted a bright red patch of beach near Madison, Connecticut.  Zooming in, there seemed no doubt.  The beach sand there is red.  Could the dominant mineral in that patch of beach be garnet?  If it is, this could be a highlight stop along the trip. 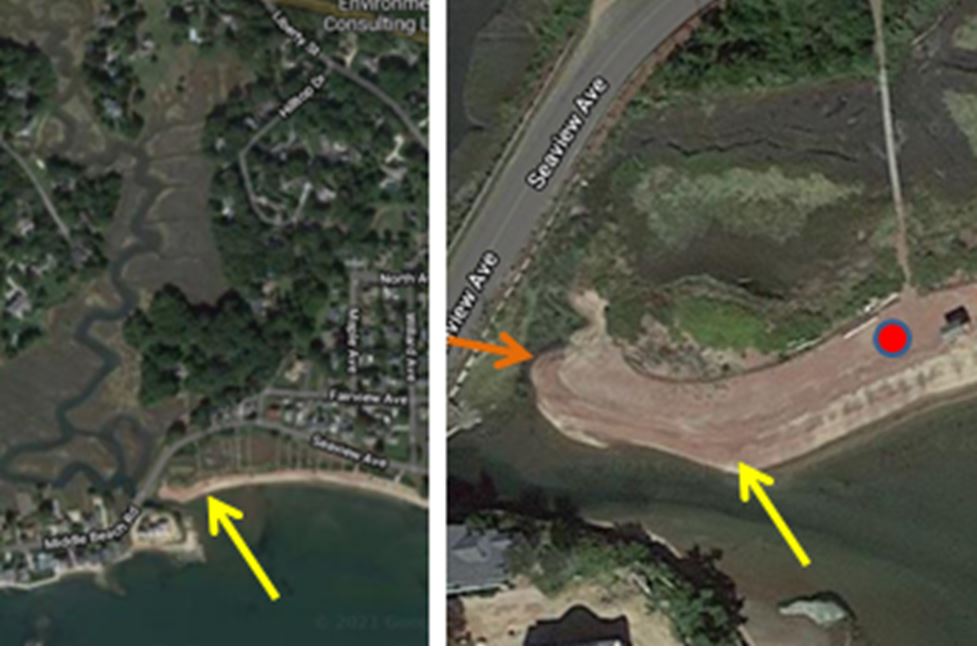 Google Satellite image of the Connecticut shoreline: The yellow arrows point to the red section of the beach “discovered” on Google imagery. Is this all garnet? The red circle on the second photo is where I acquired my sample.

I ended up collecting 45 new sand samples on that one-week trip.  Some were from inland locations along rivers, but most were coastal beach locations in Connecticut, Rhode Island, and Massachusetts.  All of the samples I obtained have found a fond place in my sand collection, but the red sand from along the north shore of Long Island Sound in Madison, Connecticut was a highlight of the trip.  Indeed, it was garnet.

So where did all this garnet come from?  Well, for starters, garnet is the state mineral of Connecticut.  Much of the bedrock in the state, in fact, much of New England, consists of medium- and high-grade metamorphic rocks produced by three separate mountain building events (orogenies) during the Paleozoic Era.  Volcanic arcs (like modern-day Japan) and the sedimentary rocks in adjacent basins were plastered against the existing North American continent and accreted to it.

During each orogeny, sedimentary rocks (dominated by shale) were buried deeply, intruded by magmas, and overlain by volcanic lava flows.  Mountain ranges were formed and the buried rocks underwent metamorphism.  Many were converted to mica-rich schists. With plenty of iron (Fe), magnesium (Mg), and aluminum (Al) to go with the ubiquitous presence of silica (Si), garnets were a common product of this regional metamorphism.

After hundreds of millions of years of erosion these once-buried rocks are now exposed and those garnets are being released into streams and rivers and carried to the sea.  Garnets are hard, so they survive the relentless forces of weathering.  They are also denser than the most common hard mineral in beach sand, quartz.  It is this property that permits them to be concentrated on beaches such as Madison.

Onshore wave action is strong and relentless and carries all sand grains onto the beach.  The retreating water has less energy and carries the lighter quartz grains back towards the ocean.  Repeated tidal action, assisted by coastal morphology and longshore currents allows for the denser mineral grains like garnet, and often magnetite, to accumulate in the swash zone left behind as each tide retreats.

Of course, deposits left behind during a normal tidal sequence are moved by the next tidal advance and heavy mineral layers are not typically preserved.  But storms generate higher tides and heavier grains can accumulate in protected regions above the normal tide level.  Such must be the case along this section of beach in Madison. 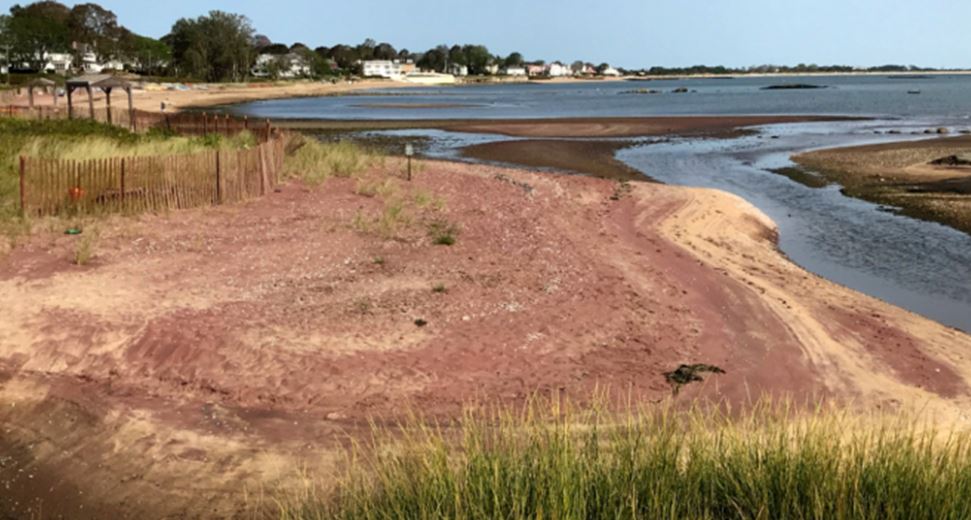 Madison beach, as observed from Seaview Ave., was as red as it appeared on Google Maps. This picture was taken in the direction of the orange arrow on the satellite photo. 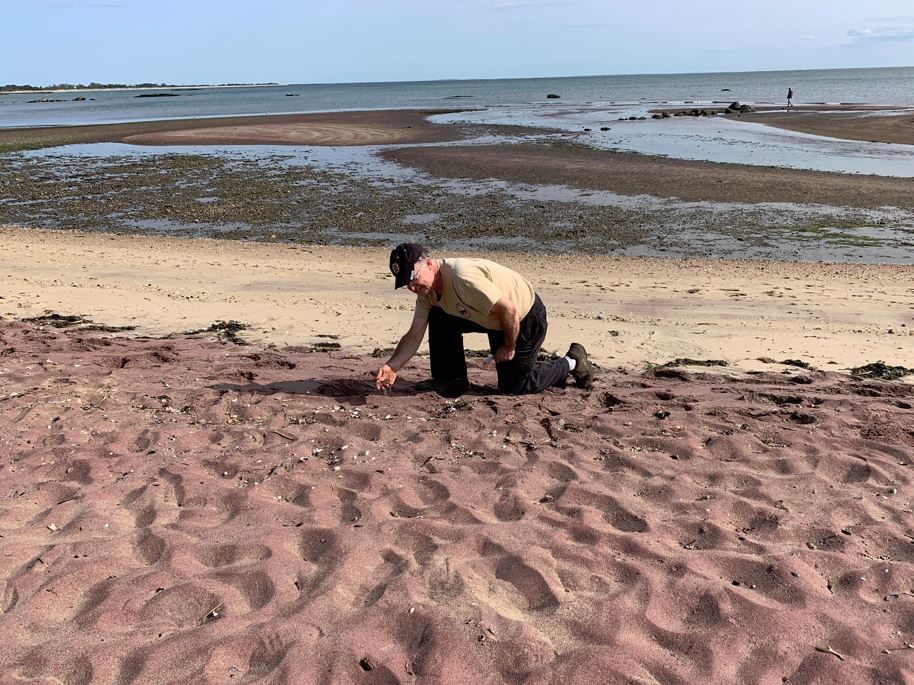 And it was still red when I walked out to observe it directly. I found myself kneeling in a literal sea of garnet sand when I reached the site near the red dot in the satellite image on the preceding page.

Once home it was time to look closely at my newly acquired garnet sand.  There appear to be two different garnets in the sand.  I have not submitted them for chemical analysis, but I suspect that the pinker grains that dominate the sand are almandine, (Fe3Al2Si8O22), which is the most abundant garnet mineral in the metamorphic terrain in southern New England.  The darker grains may tend towards pyrope (Mg3Al2Si8O22).  Almandine and pyrope form a solid solution series and many of the grains may contain both Fe and Mg in the dodecahedral cation site in the garnet lattice.

Some of the other dark grains in this sand are magnetite, but not all of them.  Pyroxene and amphiboles and even tourmaline may be present.  There should also be staurolite in these sands, another hard, dense metamorphic mineral found in the New England schists.  Perhaps the yellowish honey-colored grains are staurolite?  There is no response to long-wave UV fluorescence, but that, by itself, does not exclude zircon. 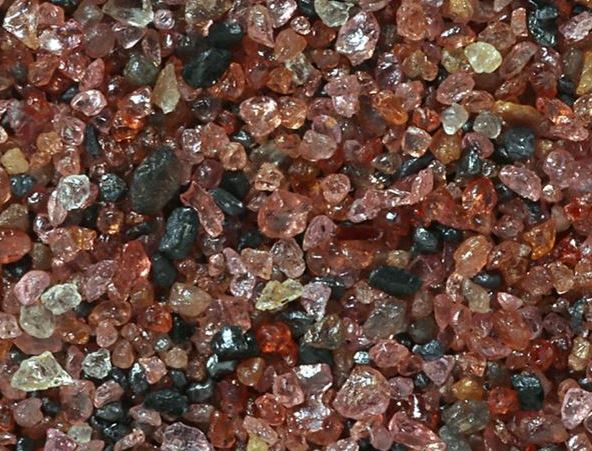 The tidal action had not only concentrated garnet, but had also generated a remarkably well-sorted, medium-grained sand with well-rounded grains.  When 50ml of the sand was submitted to grain size analysis via sieving, 77% of the grains accumulated in the medium-grained sieve (grains between 0.25mm and 0.5mm in diameter).  The second-largest component was fine-grained sand (16.4%).  There was virtually no silt and the minor course sand grains were mostly quartz.

This article was published in the 2021 Summer/Fall Issue of the Sand Paper, the newsletter of the International Sand Collectors Society (ISCS).