Just before our visit to the Gouverneur Talc Mine a cave-in had led to a partial collapse to highway 812 and repairs to the road required just about all the available tailings to fill in the damage to the road.  Upon arrival at the mine we were very disappointed because we were expecting some good specimens of hexagonite.  All we found were a few forgotten boulders around the perimeter of the site, so we (about 10-12 persons) made the best of it. Can you imagine all the hexagonite buried now beneath the road!

I had never been to a quarry before and knew very little about what to do.  I found a small 4′ long boulder and proceeded to beat on it (a la Bill Chapman) as I saw others doing.  Another member, seeing that I wasn’t having much luck breaking it, offered to help. He was much younger, bigger and more experienced than I was and quickly broke it in half.  Apparently it was worth picking up because he said “I’ll take this 1/2 and you take the other.  I later found out that Art Grant, a well known faceter gave him $400.00 (or was it $40.00?) for a nice gemmy crystal.  Art was able to facet it nicely. The moral here is “break your own rocks”.  As the years went by our club returned to this dig site every year and my wife Rocky and I found some very nice material. 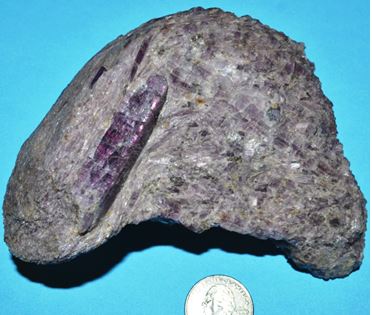 Ken and Rocky Rowe’s hexagonite were on display at the 2000 Wayne County Gem and Mineral Club show in Newark. Ken tells us that the piece in the upper right is now on display at the New York Museum of Natural History in Albany. 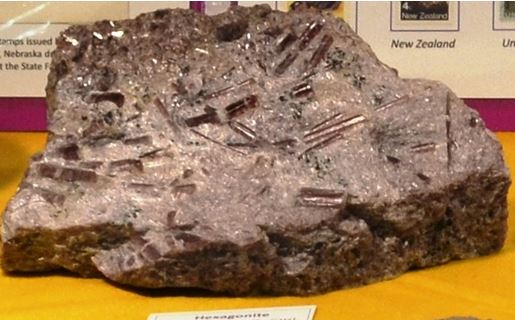 Another interesting visit to this area was during the summer of 1993.  At that time, The Balmat Mine was operated by Zinc Corporation of America and they held an open house which was very well attended.  We were served a nice lunch and given commemorative hats. Rocky and I still have ours.  But the highlight was after lunch when we were taken down into the mine by elevator and enjoyed a guided tour underground.  Many of us had never been into an operating mine and the experience was one we remember today. 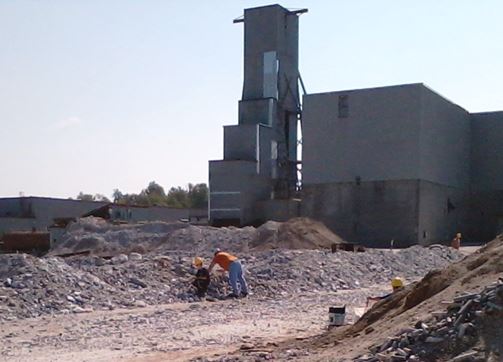 The ZCA #4 shaft that Ken and Rocky must have used to enter the Balmat Zinc Mine. The current owners maintain the underground mine and equipment in hopes that the price of zinc will permit the mine to re-open. Photo is from a 2013 of mine.

Part of our visit involved going into the main buildings and listening to the geologist explain how they find and map out the veins of zinc ore.  I was lucky enough to receive from the geologist a beautiful specimen of magnetite, which is one of my favorite crystals. I later gave it to the club for a raffle piece.  I wonder who has it today?

For a time the Gouverneur Talc Mine owners decided to open the pit up and have operated that way until they closed. The current mine dumps are now spread over many acres and are about an estimated 75 feet high. When we first went there they were only about 4-5 feet high. I believe quarry work has ceased and think it is now filled with water.

We have a lot of fond memories of the region and of collecting with our rockhound friends in the WCGMC.

Ken Rowe continues to collect with the WCGMC. Here he is chiseling out a travertine piece on our June 26th trip to Ilion Gorge.