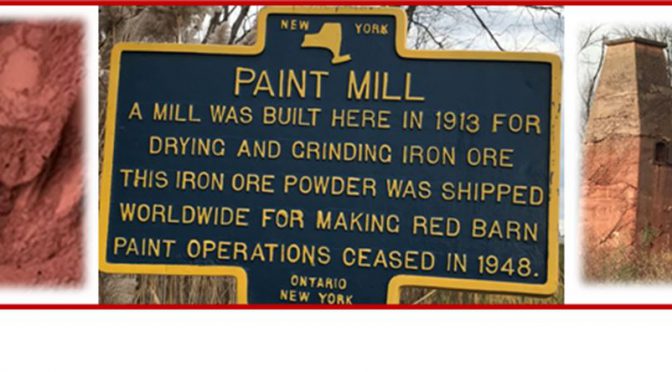 I had driven by the sign in the title box dozens of times and often wondered what might be behind the cattails and railroad tracks in Ontario Center.  Motivated by the visit to the old Wolcott furnace last month and by the possibility of obtaining a hematite “sand” sample I decided to stop on my next excursion that took me through western Wayne County on Route 104.

There is actually not much left to see.  Fighting through some briars the chimney stack from the factory can be reached and a few small piles of unprocessed hematite iron ore lay around the solitary chimney.  On the west side of the red brick structure, a protective window hides some ground hematite that apparently escaped being processed into paint. 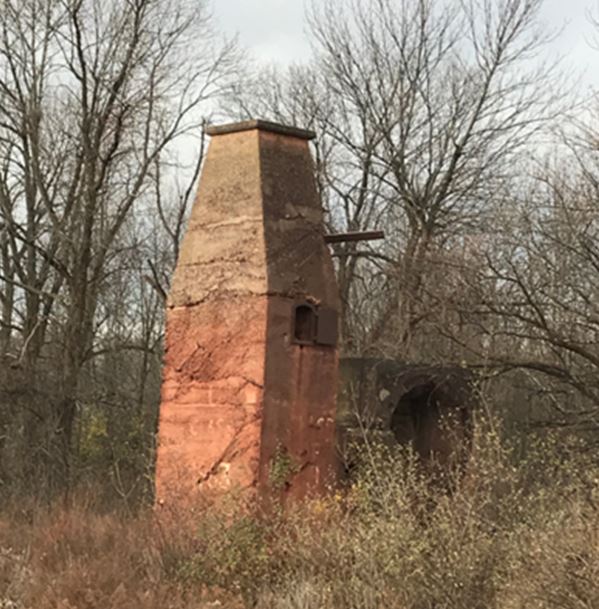 Paint mill in Wayne County, New York: Across the railroad tracks north of Route 104 between Slocum Road and Ontario Center Road this chimney stack is all remains from a paint mill that operated for over three decades in the early part of the 20th century.

The C.K. Williams Company opened the mill in 1913.  Hematite ore was brought here from nearby locations such as the water-filled quarries that are now part of Casey Park.  Once at the plant, it was crushed, bagged, and sold as pigment by the sackful.  The ground hematite could be mixed with linseed oil to produce a very durable paint.  A bit of skim milk was often added as casein, an insoluble colloidal protein in milk, was discovered to be a quality bonding agent for the paint mixture (Shilling, 2002).

Barrels of the paint were sold to farmers who found the paint affordable and easy to use.  Apparently, the paint resisted weathering better than other products available at the time and only one coat was required. It is not known how many Wayne County and surrounding area barns were painted with hematite red barn paint from this mill before it closed in 1948.

Collecting a small bit certainly permits one to understand why it works well in the production of red barn paint.  It is really really red and a small amount sure goes a long way to “painting” everything it touches.  When I got home it took more than the 20 recommended seconds to remove the red pigment from my hands.  The wash water from my clothes turned brick red almost instantly. 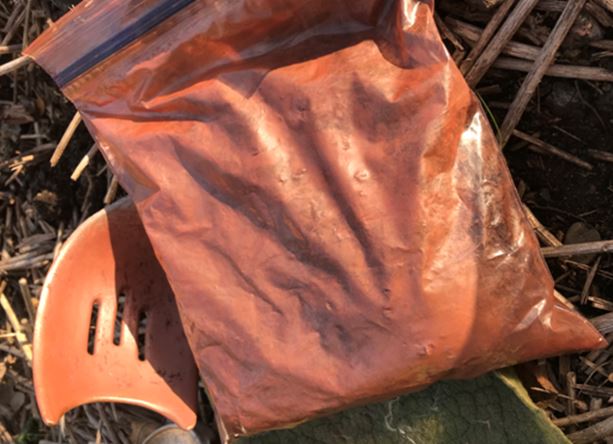 My sandwich bag sample of ground hematite. I used my silver scoop to collect it and painted it red while doing so. Technically this is not “sand”. It is clay or perhaps more accurately rock flour. But it is a very colorful addition to my collection and it comes from right here in Wayne County and with a unique and interesting history.