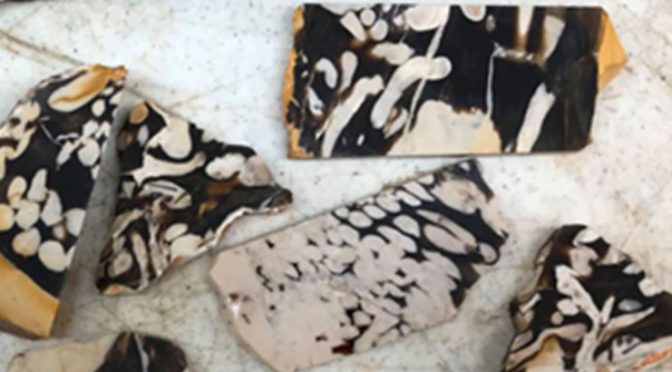 The polished slabs that were raffled at the Wayne County Gem and Mineral Club October workshop are called peanut wood, but they actually have nothing to do with peanuts.  Yes, they are petrified wood, so that part is correct, but the white-cream ovoid-shaped markings inside the wood have a rather unique origin. 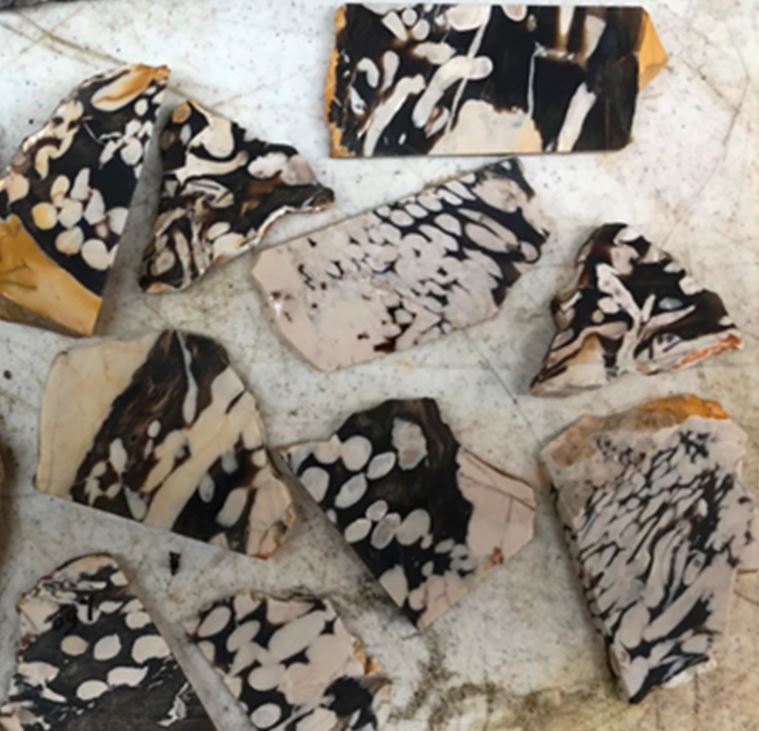 The wood is generally from conifer trees that were carried by rivers into a shallow near-continental sea off of western Australia some 100-120 million years ago, arriving there as larger pieces of driftwood.  Nothing particularly unusual yet, but then things got interesting.  At that time, there was a marine clam in the Australian marine waters that liked to eat wood.  The clam larva would attach themselves to the driftwood and start munching.  As the clams grew they developed sharp valves that they could used to shave off shale pieces of wood, eventually excavating chambers inside the wood that, you guessed it, are shaped like peanuts.

But a water-saturated log with holes isn’t enough to generate an attractive hard rock like peanut wood.  A second biologically-driven event is needed.  Radiolarians are tiny planktonic organisms that secrete a siliceous shell.  These protozoan organisms were living in the seawater above the decaying logs.  In addition to delivering the logs to the delta region, the rivers delivered a constant supply of the nutrients that radiolarians require.  A perfect storm, you might say, for creating peanut wood. When the tiny protozoans died their siliceous shells accumulated as a white sediment known as radiolarian ooze.  Some of this entered the holes in the wood, filling them with a siliceous paste on the seafloor.

The final step towards generating the attractive lapidary stone is to bury the logs and convert them into petrified wood.  The presence of all the silica provided by the radiolaria helped to stabilize chalcedony and enable silicification of the remaining wood.  Uplift since the Cretaceous has brought the Cretaceous rocks hosting the petrified wood to the surface in the Kennedy Mts., which are now 100 miles inland in Western Australia.

There are modern equivalents to those Cretaceous wood-eating clams. They are universally hated by ship-builders as they will eat and destroy any wood that man places in sea water. They are often called shipworms as the long and slender body protected by the razor-sharp shell is worm-shaped. 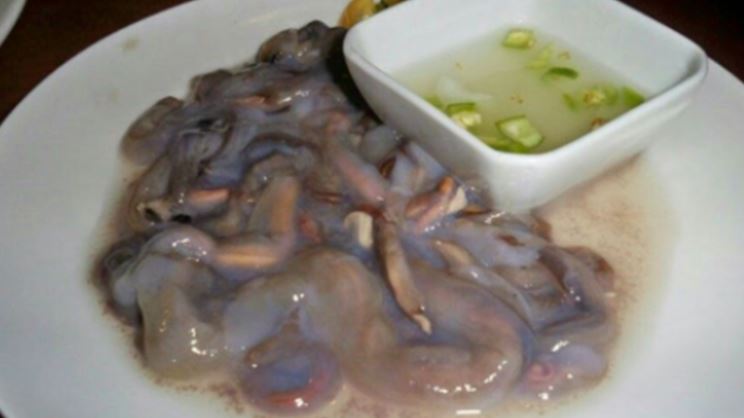 In the Phillippines, modern shipworms are called tamilok and they are eaten as a delicacy, often raw and marinated in vinegar or lime juice.