In September, I met Leo Kenney at Plum Island in Massachusetts and later at his home northwest of Boston.  And yes, we traded sands.  One that I came home with intrigued me.  It was labeled Floyd’s Island, Okefenokee Swamp, Georgia.  From all appearances, it was fine-medium-grained quartz-rich sand, much like one you might find on an ocean beach.  But this one was from a swamp.  I needed to know more.

First, I asked Leo how he came upon the sample and what he could tell me.  It is nice to know not only the geology of samples, but a bit of human history of their collection.  Leo responded with this:

“I had visited the Okefenokee each April for about 15 years in the 70s and 80s. Always with other people as we greeted spring in the southland, looked for herps, and enjoyed nature.  I’ve been to Floyd’s Island many times.  The island is best reached by watercraft from Francis Marion State Park at the southern end of the swamp.  After a 20-year lapse a couple of people that were on the earlier trips as college-agers took me back in 2006 to reunite with the swamp.  By 2006, I was in my second year of sand collecting but had no idea what  I  was doing with sand except I wanted to take pictures of it.  The Okefenokee sand is a basic fine-grained white quartz.

I actually collected two samples from Floyd’s Island. One I dug from below the surface duff and vegetation. The other I took from the water.  They are very similar.  You have the sample that was recovered from below the water at the edge of the island.  It is nice to see that my collecting has generated some interest. ” 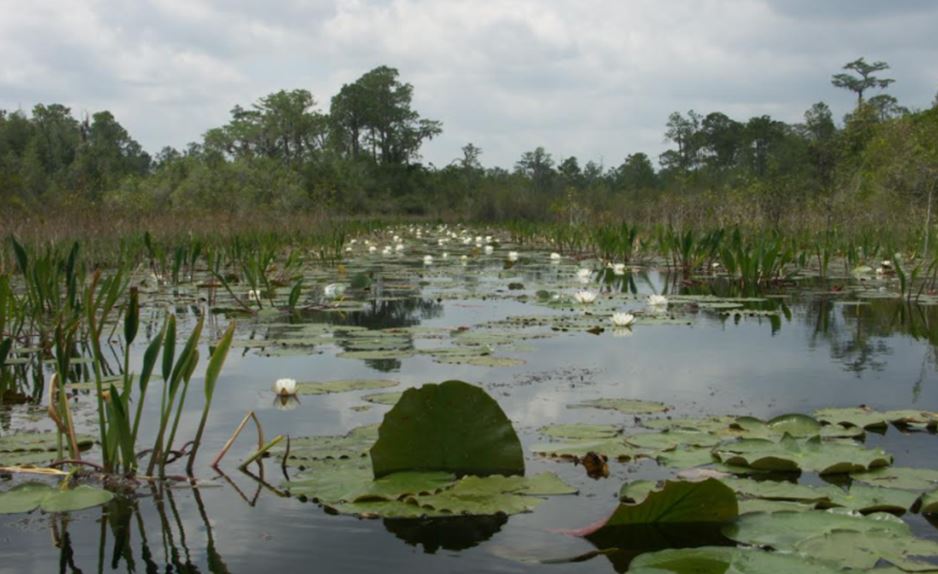 This was a perfect start, but now I just had to know.  How did all that quartz sand end up being in islands in one of the largest inland fresh-water swamps in the southeastern United States?  The Okefenokee swamp is known for large accumulations of peat and cypress tree forests, and as Leo has told me, for its native reptiles. It is not, however, known for quartz sand.

I started with Google Maps.  Indeed, Floyd’s Island is smack in the middle of the Okenfenokee National Wildlife Refuge.  The coordinates Leo had provided plotted on the western margin of the island (see figure to the right).  The satellite image of the island even shows the white sand substrate between the small trees on the island.  But why is it now in a swamp setting and how did they get there?

A bit more surfing on the internet and I found what I was looking for: a comprehensive paper on the geology of the swamp.  Davis (1996) mapped the arcuate sand bodies (now islands within the Okefenokee Refuge) and determined they were paleo-river bars or levees within an abandoned river channel.  Back during the Pliocene Epoch (5 to 2 million years ago, the Suwanee River flowed east through the region and large crescent sand bodies formed as part of a large delta system.  The river system migrated across the delta and new bars were established.  Floyd’s island seems to be the northern-most such sand body currently exposed.

Sometime less than 1 million years ago, but longer than 400,000 years ago, a large coastal dune system was built along the eastern Atlantic coast.  Located about 25 miles inland and now called Trail Ridge,  this ridge blocked the Suwanee River from exiting to the Atlantic Ocean.  The river diverted and now winds southwest into the Gulf of Mexico.  With this change, the region just west of Trail Ridge was stranded and evolved into the Okefenokee swamp.  As sea level fell during a series of glacial advances the sand bars of the ancient river became islands in a freshwater swamp. 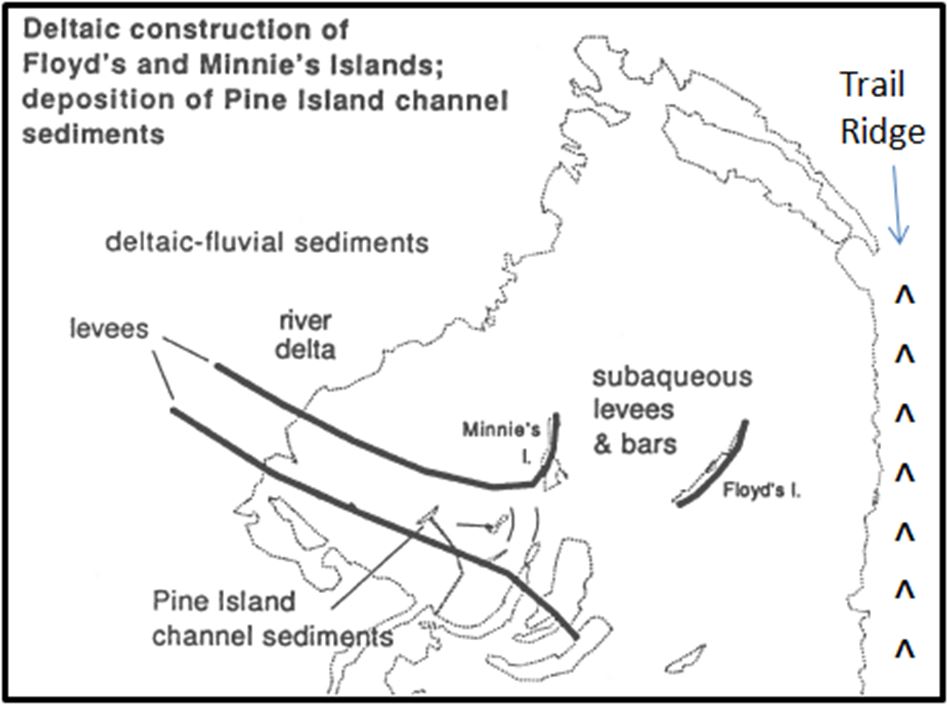 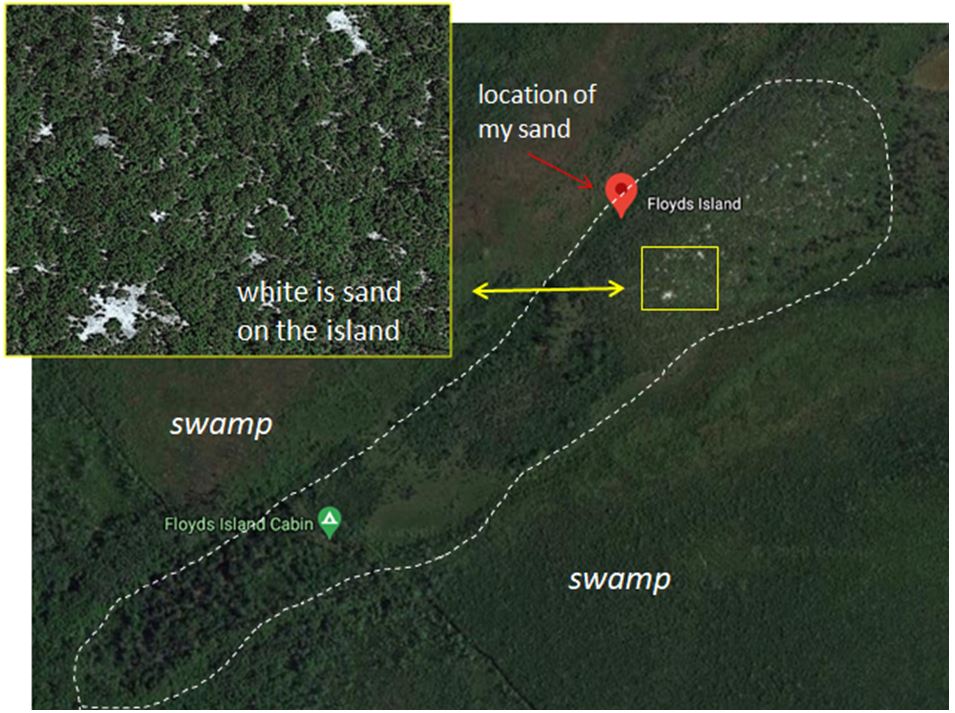 Floyd’s island is a bit more than 1 mile long.   Both Imagines are from Google Earth.
.

Of course, I also wanted to look at the sand in a bit of detail.  Leo Kenney has helped again providing me an excellent photograph. 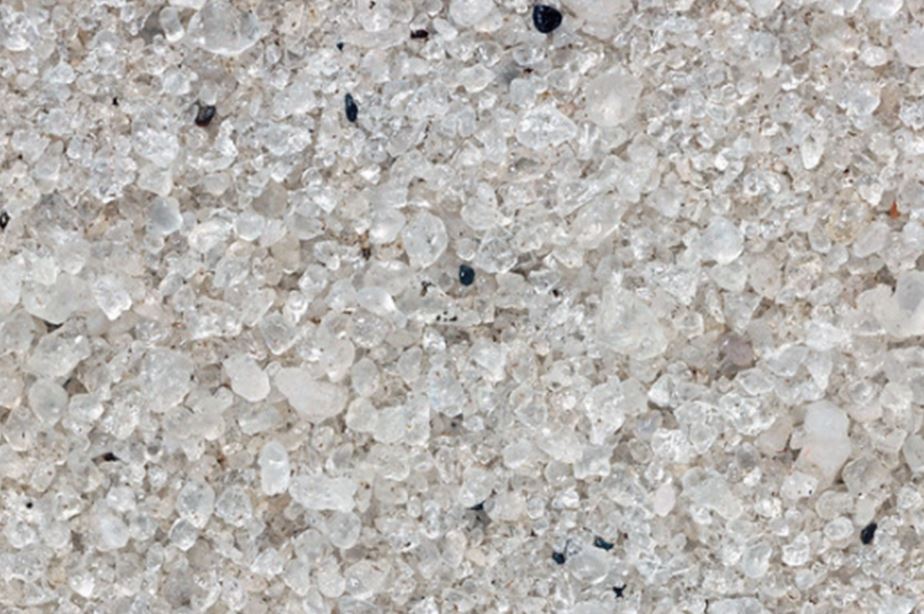 Sand from Floyd’s Island, Okefenokee Swamp, southeast Georgia. The sand is fine-grained and well-sorted. There are subangular grains, but most appear sub-rounded. A few grains are frosted, but most are clear. The few black grains are not magnetic.

It is worth noting that elsewhere in the southeast Pliocene and Pleistocene sand units contain lenses with sufficient heavy mineral concentrations to be economically mined.  Rutile, ilmenite, zircon, staurolite, leucoxene, and other heavy minerals can be recovered from selective sand units.  Several of these mines are located within the sand horizons that make up Trail Ridge.  However, my sand sample from Floyd’s Island is practically devoid of these minerals and the satellite image on the preceding page suggests that the processes concentrating heavy minerals in the ridge may not have occurred in the river deltas.

Most people who visit Okefenokee Swamp do so to enjoy the scenic beauty of the nation’s largest “blackwater” river/swamp1, and perhaps look for birds and reptiles.  I’ll do that if I manage to work a trip to the region into my future plans, but I will also want to check out some of the swamp sand.  Perhaps it will all look like this sample from Floyd’s island, or perhaps some will contain heavy minerals that I can isolate and try to identify.

1 Blackwater rivers are slow-moving rivers characterized by swamp-like conditions and acidic waters.  They have distinct flora and fauna from typical fluvial systems.