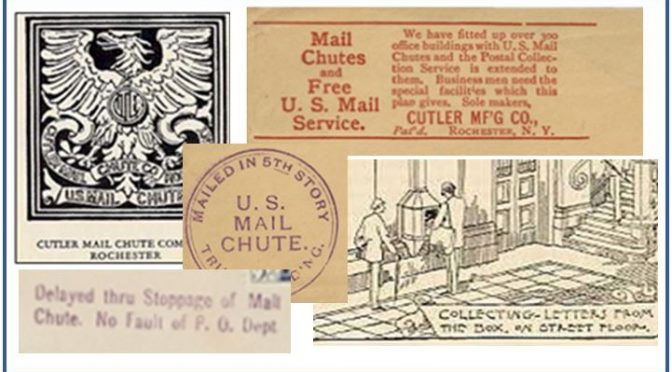 In the late 19th century, building technology and urban development led to taller multistory buildings.  Office and apartment buildings grew vertically.  Naturally this led to new opportunities for creativity and invention and the Post Office Department was looking for improved methods to collect and move the mail from these buildings.

The idea of creating mail chutes to optimize the collection of outgoing mail from the taller buildings sounds like a simple innovative solution that should have occurred as soon as tall buildings were built.  But it took until 1883 for the mail chute to be invented and the first installation was right here in Rochester, New York.

In 1879, James G. Cutler designed and built a seven story office building for Frank Elwood, a lawyer and the owner of the property on the northeast corner of “Main and State”.  The cornerstone was laid on May 13, 1879 and later that same year tenants began to occupy what would be called the Elwood Building.

Four years later, in 1883, Cutler added an innovative device to the Elwood Building intended as a convenience to both the tenants and the postman.  He installed a mail chute that carried mail down to the lobby where the postman could collect it.  This simple, yet elegant, device was such a success that Cutler patented his invention and started the Cutler Mail Chute Company.  It is believed that more than 1600 Cutler Mail Chutes were installed across the country in the first 20 years that the company operated.   Each carried the Cutler Company emblem depicted in the upper left of the title bar of this story. 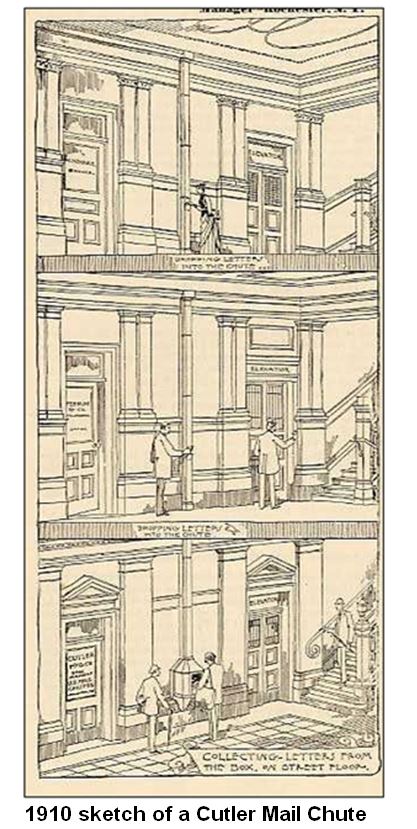 In addition to his work as an architect and his Mail Chute Company, Cutler would become the 48th mayor of Rochester, New York, serving four years from January 1904 through December 1907.  Cutler passed away in 1927.  The University of Rochester’s Cutler Union, opened as a student union for UR women in 1933, was funded by a bequest from James Cutler.

Sadly, the Elwood building and the original Cutler Mail Chute fell victim to the wrecking boom in 1967, part of the Genesee Urban Renewal Project.  The Crossroads Building was later built on the site. 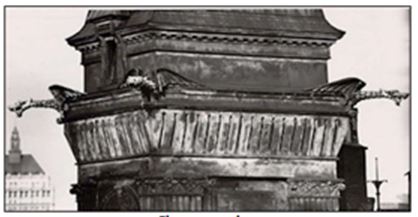 Even the famous gargoyles that stretched out from each side of the top of the building did not survive the ruthless renewal project.

Although the Rochester Mail Chute has been destroyed there are other mail chutes that still exist and stamp collectors can search for covers that were mailed and labeled as having passed through a Cutler Mail Chute.    The labeling/marking applied to mail  by post offices  are called Auxiliary Markings and are considered desirable collectibles by many. 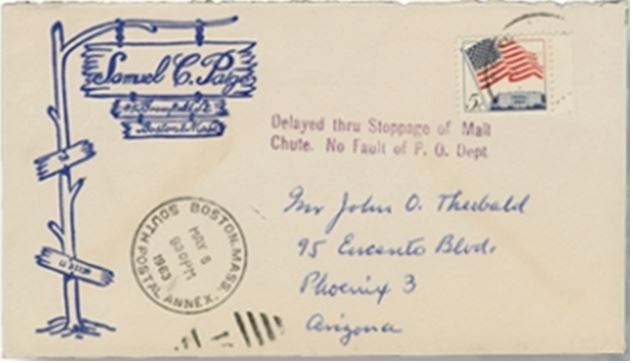 A novel auxiliary marking: One interesting aspect of office building mail chutes is that occasionally the mail would get stuck inside them, often for long periods of time. Once the problem was realized and rectified the post office would apply an auxiliary marking acknowledging why delivery was late and naturally absolving themselves of any blame! “Delayed in Mail Chute”: became yet another interesting postal marking for auxiliary marking collectors to seek among the older envelopes available at shows or online. This cover is from Hotchner, 2016. One infamous mail chute clog occurred in the McGraw-Hill Building in New York City in 1986. It is reported that the chute there was clogged for two weeks and over 40,000 letters accumulated before the problem was recognized! 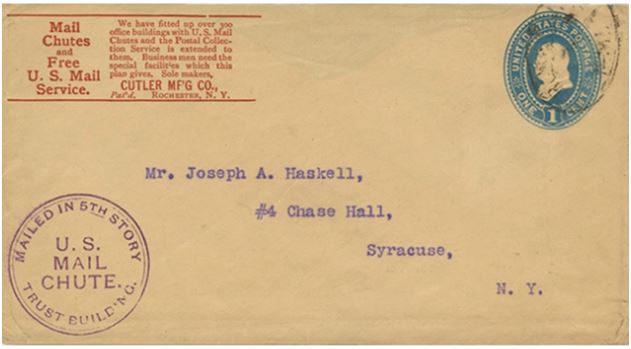 Another collectible involving mail chutes is to look for covers that carry either a Cutler Mfg. Co. advertisement or a postal service stamp locating the location of the mail chute where the letter was mailed. This 1887 cover has both such markings (Hotchner, 2016).