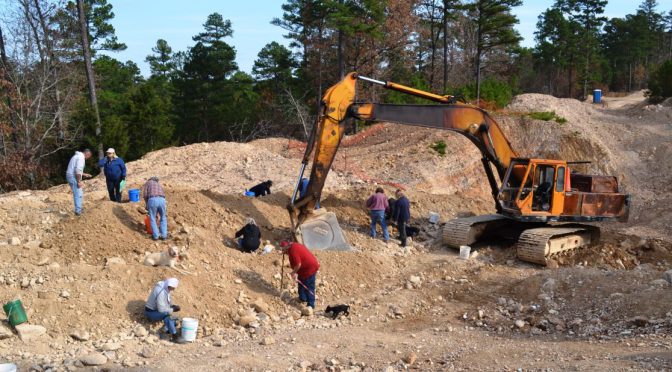 Twelve WCGMC rockhounds made the nine day trip.  Rick and Denise Leszczenski flew on ahead of us, Ed and Donna Smith followed or led in their Subaru, and the rest of us (Glenn, Eva Jane and Matt Weiler, Bill and Rita Lesniak, Bob Linderbery, Linda Schmidtgall and Fred Haynes) found positions in the two-part monstrosity pictured  above.   We  all  rode  in  the  front  part,  although there were times when we might have wanted to put someone in the back, you know, to protect the minerals, but we won’t go there.   And those 3300 miles, Glenn drove every last one of them.  We owe him a really big attaboy for that. 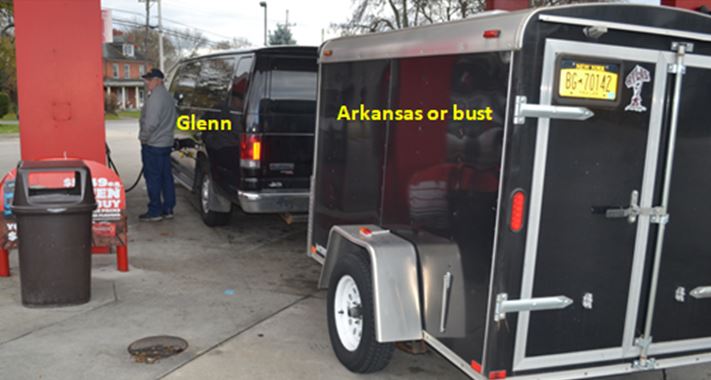 Seemed like we were doing this a lot on the way down, and even more often on the way home!!

Quartz was easy to find.  Identifying leaverite was not as easy.  Not everything was museum quality or even undamaged, but after driving over 1300 miles in two days, it seems like we were obligated to fill the buckets and containers we had brought and then go out looking for more.  Single points, cluster pieces, and matrix pieces of all sizes were waiting to be discovered.  We visited mines on three consecutive days, Sweet Surrender, Ron Coleman’s Mine, and Twin Creek.  Very different locations, but none disappointed us. 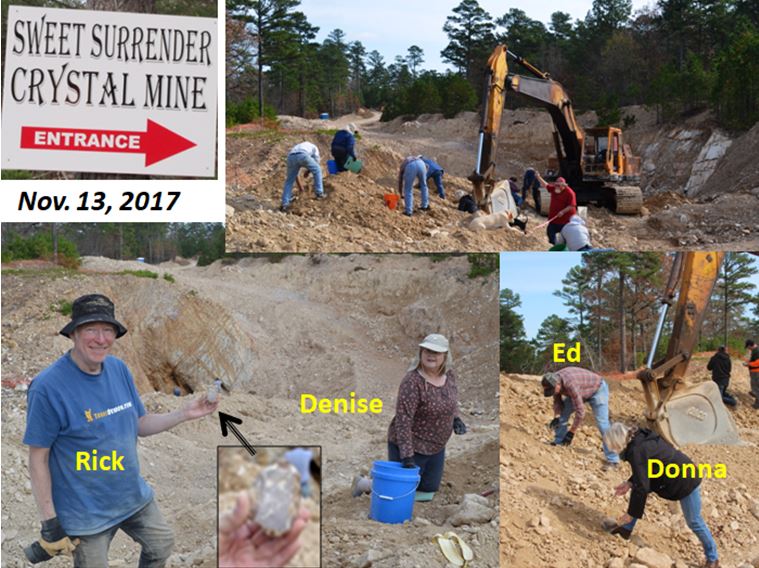 Shirt sleeve weather in mid-November greeted us on Monday morning at Sweet Surrender. Look at the beauty Rick dug out. 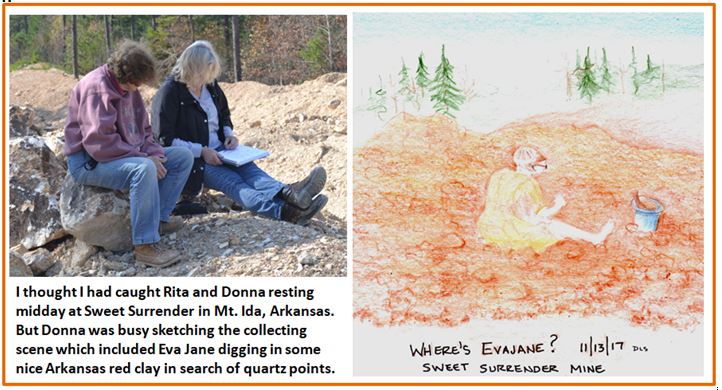 Tuesday morning Fred had set up a visit with “John Be Crystals” at his home/workshop in Story, AR.  Quartz was everywhere, on pallets, on tables, and in large vats of heated oxalic acid.  We admired and we purchased.

John (johnbecrystals.com) shows us some of his cleaned pieces on one of many tables. He was prepping for an upcoming show. (Photo by R. Lesniak)

After visiting with John, we headed for the mecca of Arkansas quartz mines.  Ron Coleman Mining more resembles an open-pit copper mine than a quartz mineral location and the processing “plant” is perhaps as impressive as the large hole in the ground.  Ron, himself, gave us a tour of the warehouse and oxalic acid bath units. 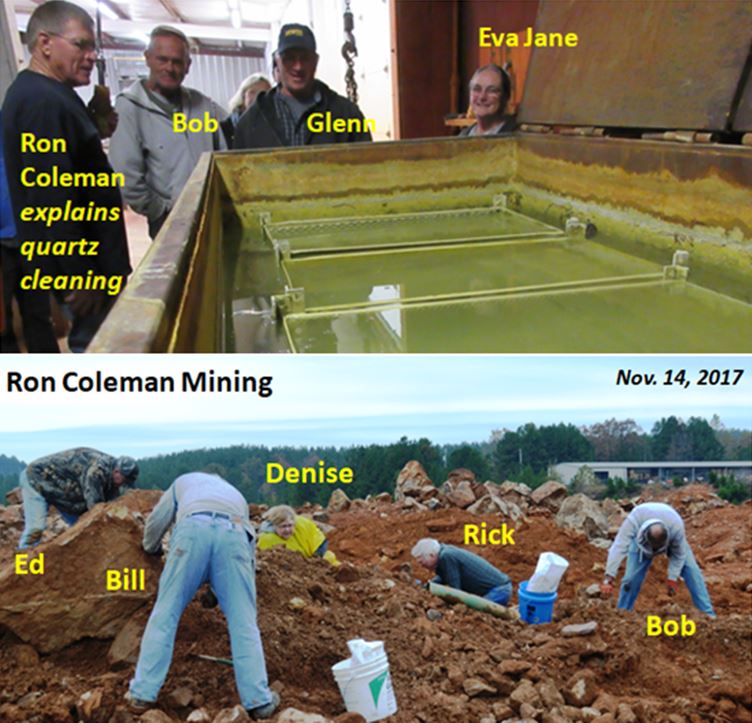 Tuesday at Ron Coleman’s Mine in Jessieville, AR. 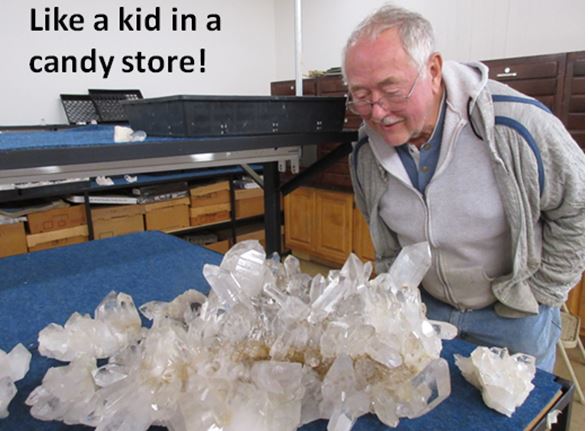 It was in Ron Coleman’s shop that Bill Lesniak was caught oogling one of literally hundreds of large clusters. (Photo by R. Lesniak)

Enough of this though, and we soon headed for the dumps to find our own.  No hammers here though.  That sort of cramped our style, but we persisted.  Did anyone ever tell you the Arkansas red clay is sticky? It is. 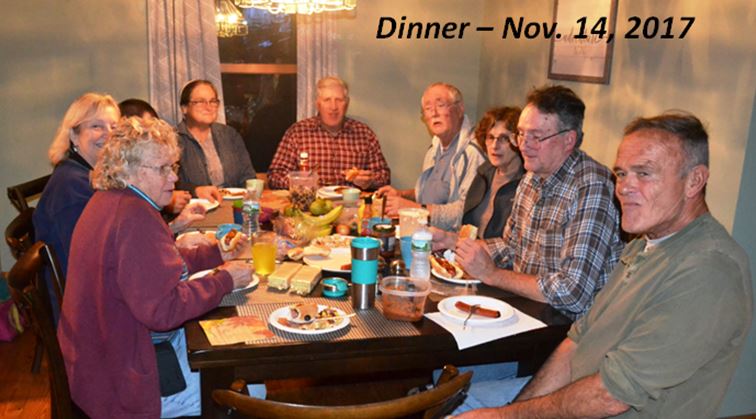 Do we look tired? Well, we were!

Wednesday morning we slept in: enough of those 5:30 AM wake-up calls.  We snoozed til 7:00 and cleaned rocks.  Twin Creek Mine was only 20 minutes from “home” and opened at 9 AM.  Of course we got there just as the owners were arriving.  Some things cannot wait and digging is at the top of that list. 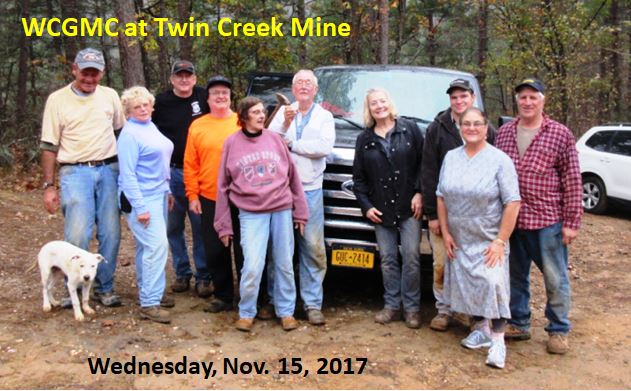 Wednesday was day 3 and Twin Creek was on the agenda. Bob’s little friend on the left was not with us, but we let him join us for the picture.   He had a great name for a mine dog.  They called him “Digger”. 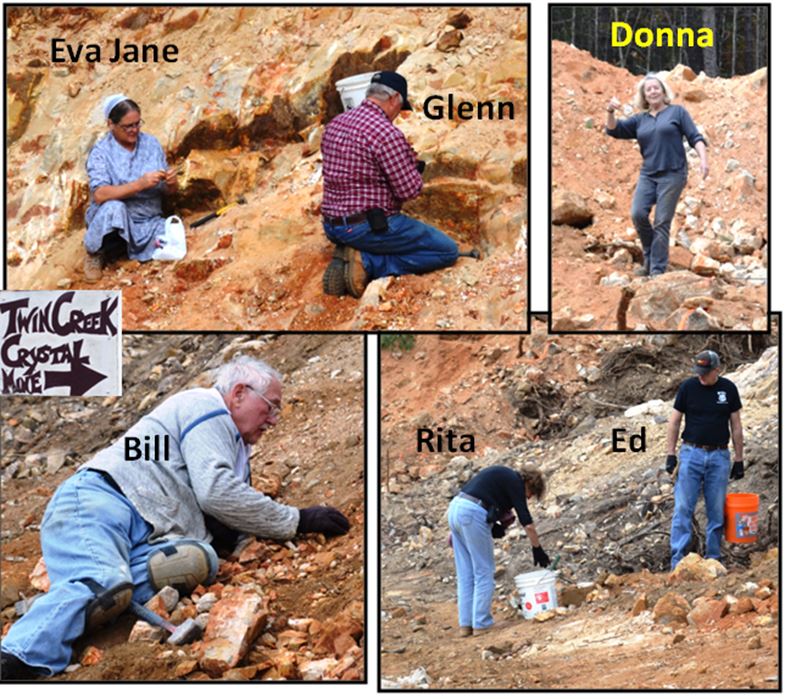 “Action” shots from Twin Creek. We thought Donna was holding up a big crystal for all to see, but instead she was coming down to show us her cut finger and in search of a bandaid. Quartz can fight back.

I should mention that we found a wonderful house to rent for four nights just 10 miles east of Mt. Ida.  The home had beds for all and a wonderful living area for us to cook together while swapping lies about our massive finds.  Cards were dealt, a game called Five Crowns.  I was told there was no gambling involved and that there were only winners.  However we did use the cards to divide the spoils at times and there were certainly winners and losers then.  The location was so civilized that Sunday and Monday night football was available for those interested.  The house even had a carport that serviced as quartz cleaning central.  The “Pine Ridge Cabin” airbnb sure beat a motel for our stay in quartz country, USA.  Check them out and tell them we referred you. 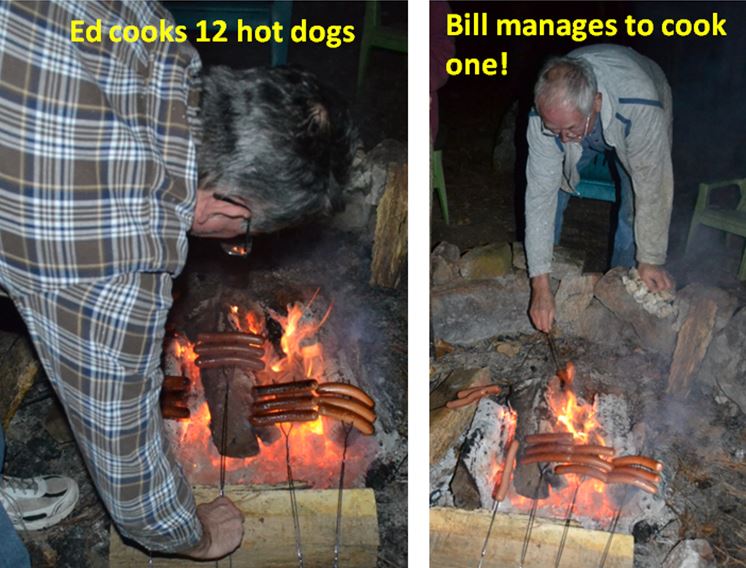 Cookout on Tuesday: Ed Smith brought venison and chili for our first night so we put him in charge of the hot dogs on day 3. He managed to cook 12 hot dogs at once. Bill, however, had to do his own to get it just right. 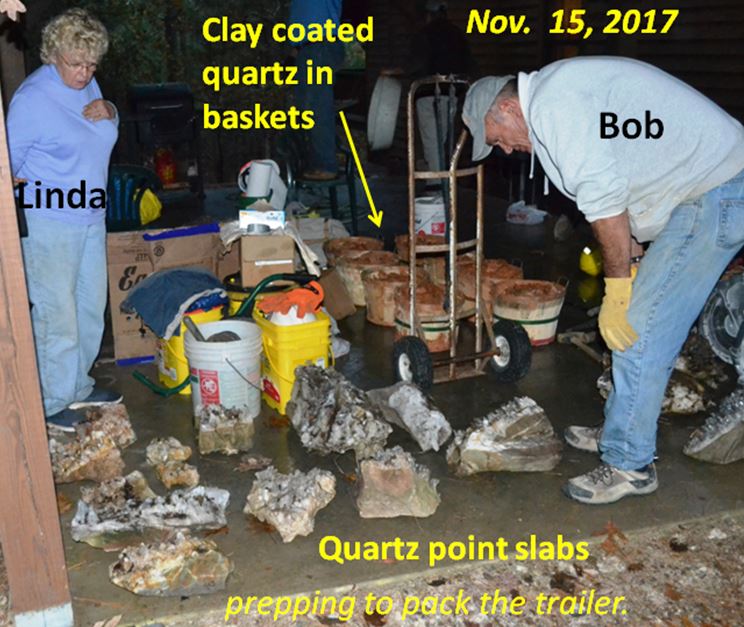 All of this and much more needed to get packed into the trailer. Well, we let Bob and Linda ride in the van!

On arrival in Mt Ida early Sunday evening we had dropped off a dozen buckets of personally collected minerals and fossils with Larry at Atlantis Found.  Linda had set up a swap and we returned late Wednesday to find him most generous.  The large slabs on the carport floor and others even larger came from Larry in trade.  If you are ever in Mt. Ida we recommend you stop at Atlantis Found.  Tell Larry you heard about him from us.

We packed the trailer and headed east on Thursday morning.  Visions of crinoids, kyanite and garnets danced in our minds as Glenn drove us across Tennessee.  But you will have to wait until the next newsletter to learn what we found on the second half of the trip!