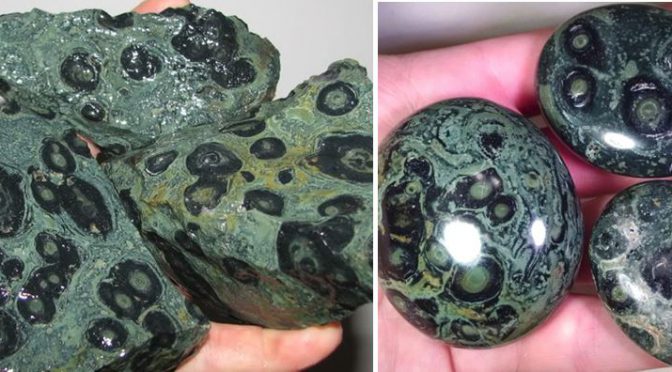 Having collected stromatolites in several locations in New York and Ontario, I was attracted to a small polished piece offered this past October by a dealer at the Rochester Gem and Mineral show.  It was labeled Kabamba Jasper – stromatolite, Madagascar.   It was a pretty green color, showed physical characteristics of a stromatolitic origin, and best of all, it was reasonably priced.  I bought it and came home to research the geology and age of my new find.   Immediately, things got complicated. 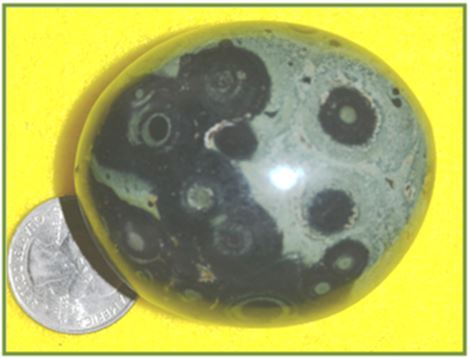 My polished piece of Kabamba Jasper – Madagascar: But is it really of biologic origin?

Sure enough, I found believable and professional appearing entries documenting the material as a Precambrian stromatolite.  Spellings varied (Kambaba, Kambamba, Kabamby) and some called it a stone rather than jasper.  This was based on textural and mineralogical observations that it was  translucent (jasper is not) or not 100% chalcedony.  But, numerous sites suggested a biologic stromatolitic origin.  And one can certainly purchase it as a fossil stromatolite from a number of online vendors.

Some confusion results from folks holding pieces of the better known ocean jasper, also from Madagascar, that is clearly of volcanic origin.  Ocean jasper is either devitrified obsidian, or perhaps partially crystallized and even weakly metamorphosed rhyolitic flows.  One entry on a Mineral Forum  offered a possible explanation for the confusion introduced by Kabamba Jasper.  The entry included a picture of the ocean jasper, purported to be from Mahajanga Province (left below) , and the Kabamba Jasper from the Bongollava region in central Madagascar (right below).  This note suggested the latter was of biologic origin and most likely fossil stromatolite. The polished slab on the right does look similar to my piece.  At this point, I felt I had learned more about two lapidary products from Madagascar. 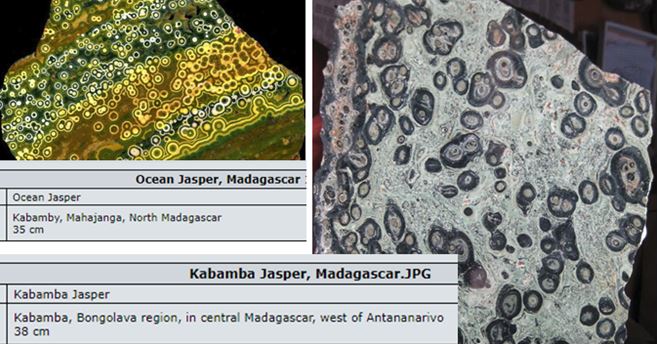 from http://www.mineral-forum.com/message-board/viewtopic.php?t=5290But not everyone agreed.  A long mid-2014 discussion on The Fossil Forum told a far different story.  After several concurred that Kabamba jasper had a stromatolic origin, a new contributor entered and cited a German mineralogical study of the material.  That study claimed that “thin section and micro-probe analysis showed that the rock consisted of quartz and orthoclase with embedded green amphibole aggregates (riebeckite and arfvedsonite) surrounded by aegerine (a pyroxene)”.  The authors went on to conclude “the opinion expressed by companies in Madagascar and the USA that it consisted of fossil stromatolite is definitely wrong”.

I was uncertain again, and turned to see if the Stromatolites book I reviewed in the December newsletter (Leis and Stinchcomb, 2015) had anything to contribute.  And indeed they did!  On page 91 there were two pictures of the material (Figures 6-38 and 6-39).  One of the captions read: “Slab of rhyolitic tuff from Madagascar.  Many polished specimens of this are labeled and sold as stromatolites (or oncolites).  They are attractive, but almost certainly are not biogenic in origin.  They appear to be a type of lithophysae.” A lithophysae is a spherulitic felsic volcanic rock, such as rhyolite or andesite.

For me the case was closed.  I have a polished spherulitic volcanic rock, likely moderately metamorphosed!   If anyone has evidence otherwise, I would love to hear from you.

2 thoughts on “Stromatolite or maybe not?”