Published in the July WCGMC Newsletter

Admittedly, some of the Wayne County Gem and Mineral Club collecting trips are out of this world.  However, that’s figurative speech as we have not yet actually figured out how to visit any true planetary bodies.  No, Cobalt, Ontario does not count, not even Sudbury.  But suppose we could travel to another planet to collect.  What might we find?  Let’s consider Mercury for starters.

We all know Mercury is the closest of the 8 planets to the sun, orbiting the sun in just 88 days.  Sunny side temperatures can exceed 800°C while the mercury (pardon the pun) can drop to -250°C on the dark side.  This is exacerbated by the fact that Mercury rotates very slowly on its own axis such that a Mercurial day is more than 58 times longer than one on earth.  We will clearly need to plan our visit to arrive and leave at dusk or dawn.  But, I digress. 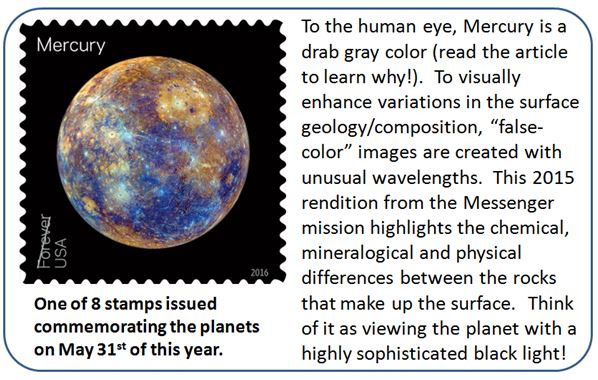 The surface of Mercury is heavily cratered much like our moon.  Although Mercury does have a molten iron core like earth, its surface more resembles the moon as it lacks recent surface magmatic activity or any type of tectonic movement and has virtually no atmosphere or surface water.  Given those factors, impact events from longer than two billion years remain undisturbed and erosion is practically non-existent.  But that is apparently where the similiarity between Mercury and the moon ends.  Besides,   this article is supposed to be about mineral collecting on Mercury.

The composition of the surface rocks on Mercury have long puzzled astronomers and geologists.  First off, the surface of Mercury reflects much less sunlight than the moon.  This was thought to reflect the presence of iron or titanium-rich rocks, but early data from the Messenger probe did not find either in appreciable amounts despite orbiting the planet and collecting data from 2011-2015.  However, last year a breakthrough in analysis of the infrared spectra data from the Messenger data combined with neutron sparks released by cosmic rays striking the planet’s surface allowed the question to be answered.  Much of the surface of Mercury is covered by carbon, actually by the mineral graphite!

The mineral is believed to have been generated by magmatic igneous processes long ago, like billions of years ago when the planet was volcanically active.  With seas of magma rising and pooling on the surface of Mercury, elemental carbon would float to the surface, differentiated by density from silicates, alkali elements, and obviously metals. Lacking oxygen to form carbonate minerals, the carbon remained in native form.  The result was a vast amount of the mineral graphite.

In fact, it is believed that a few billion years ago large portions of Mercury may have been covered by a shell of graphite as much as a kilometer thick (Sokol, 2016).  Lava flows may have locally buried the layer, but impact events over the ages would gouge down to the graphite, exposing the layer in the deeper craters and spreading it across the planet as ejecta which rained down all around the impact crater.

If correct, one of the primary minerals to collect on Mercury would be graphite, perhaps in very large chunks.  Perhaps even in megacrystals the size of school buses. Well, one can dream.

Sokol, J., 2016, Mercury once had a graphite crust floating on a sea of magma, online New Scientist, March 7.