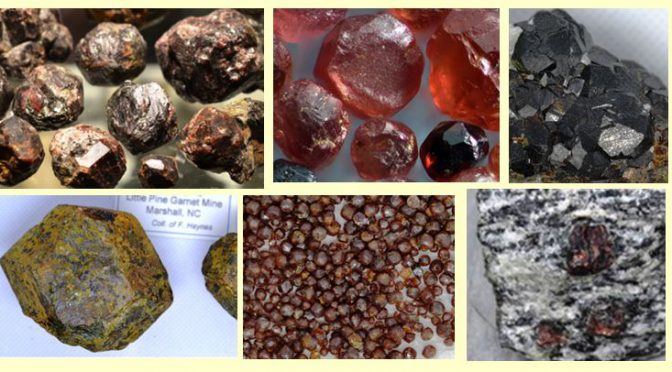 The spring of 2020 was not a time for collecting and it appears the summer may not be much better.   But that does not preclude me from reminiscing about a few past trips and finds.  And I have decided to do that with a focus.  I am going to think about all the places that I have been with Wayne County Gem and Mineral Club where garnets could be collected.  Not only is this club “always looking for places to dig”, but they are pretty darn good at finding them.

New York:   Of course, we should start in my own fine state, and perhaps even in Wyne County.  Several rocky beaches along Lake Ontario in Wayne County offer opportunities to collect garnets in rocks that have been carried to us by glaciers and left on the shoreline during storms.  Some are fine rock specimens just as they are.  Others are perfect for lapidary work. 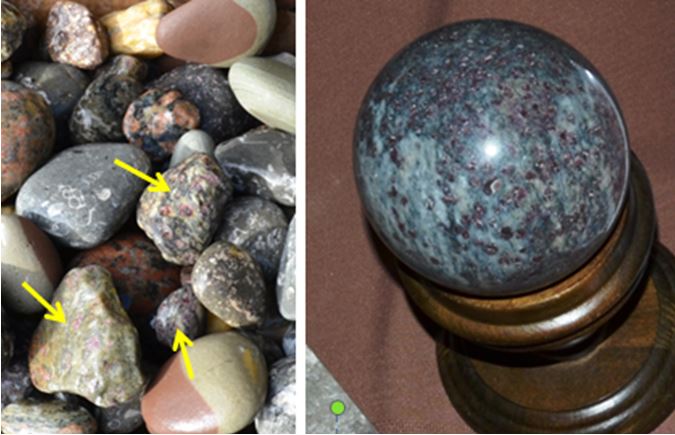 There is lots of variety to choose from along Lake Ontario in Wayne County. Can you see the three garnet gneiss in the picture on the left? Heidi Morgenstern found a much larger stone and won the 2019 Best New York Mineral/Rock find with the polished sphere she created in the club workshop.

Of course, one can travel to the Adirondacks and find garnet that has not been moved by the glaciers.  There are many locations with garnet (Benson Mines in Star Lake is one example), but another site is the abandoned Hooper Mine site in North River.  You won’t likely see euhedral garnet here and you won’t encounter gem quality, but if you like metamorphic rocks with large garnet porphyroblasts (i.e. teaching rocks), this is a great site.    Just don’t go during deer fly season;  I made that tactical error in May 2017. 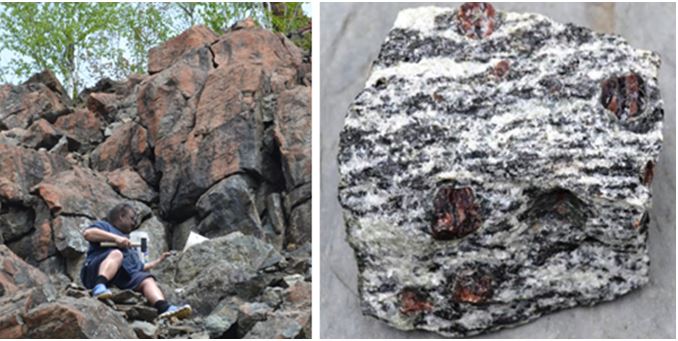 On the left, the old quarry walls form a bit of a semi-circular enclosure.   On the right, my favorite Hooper Mine rock specimen of garnet gneiss, ~3” across.  Many have seen this piece on display in a teaching exhibit of New York rocks.

North Carolina:   The club traveled south in November 2017 trip south and visited Little Pine Garnet Mine in Marshall, North Carolina.  The garnets there are hosted by chlorite schist and they are large.  Unfortunately, the surfaces are altered and all luster is gone, but some are really nice dodecahedrons. 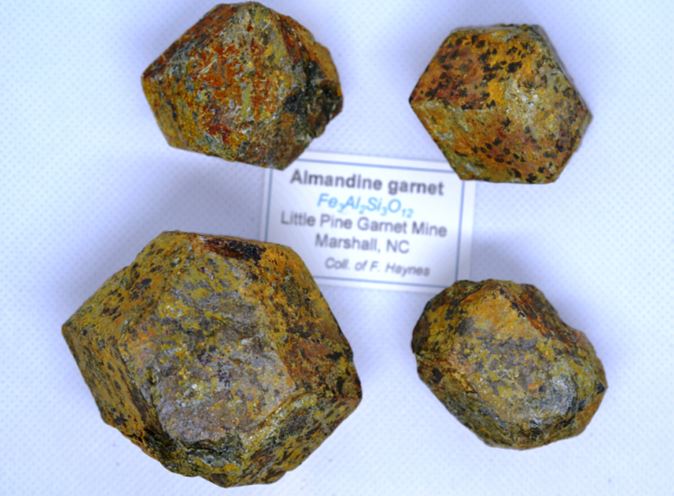 My best garnets from Little Pine, NC. I collected the two on the right. The two on the left, including the largest one (2.5” across) were acquired during a trade from a Georgia collector who we met while on a field trip to Kentucky in 2018.

Maine:  Although tourmaline and other more exotic minerals get much of the attention from those who frequent the pegmatite mines in southern Maine, garnets are common there also.  We collected them last summer at several locations, nice red pyrope garnets at Mount Apatite (both east and west locations) and other pegmatites.  We even found andradite garnet in a skarn (contact metamorphosed limestone) that had been blackened by uraninite coating.  But my only truly photogenic Maine garnet was obtained by trade. 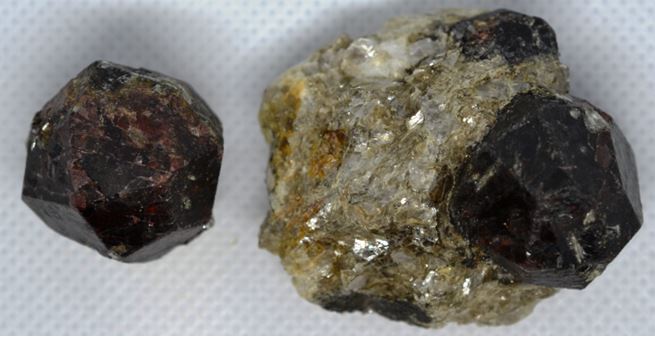 Two almandine garnets from the Hedgehog Hill Quarry in Maine obtained in a trade with Wanda Turcotte, who we met on a joint collecting day with the Maine Mineralogy Society last summer. It was a straight-up garnet trade, these two for two similar garnets from River Valley, Ontario.

Connecticut:   In the past, WCGMC visited Green’s Farm in Roxbury.  What a wonderful site, but, alas, that location has now been closed for several years.  More recently, we have collected garnet in a couple of the pegmatites in the Meshomasic State Forest in central Connecticut (sites clubs can visit with permission from the state).  But I’d like to feature an interesting find we made in a roadcut in Tolland, CT.

The Littleton schist is full of small (OK, tiny) 1-2 mm-sized bright red almandine garnets.  It is believed that the garnets formed when the sedimentary and volcanic rock units were being metamorphosed to schist during the Acadian Orogeny (400-350 million years ago in the Devonian Period).  At this time, when western New York was sitting beneath a shallow tropical inland sea and trilobites and brachiopods were enjoying themselves in and around coral reefs, very high mountains were building to our east. Subsequent erosion has exposed the metamorphic roots of these mountains. 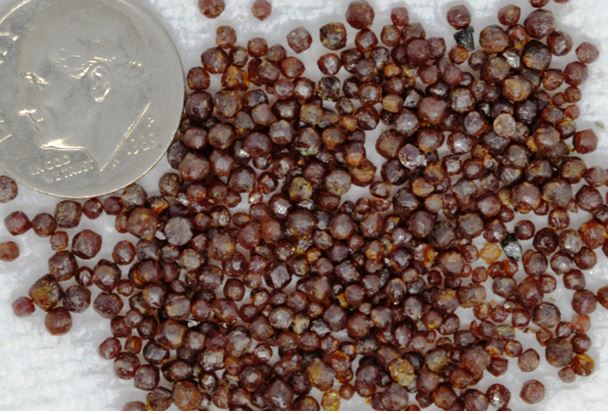 The Gerber Rd. roadcut in Tolland, CT is site #9 on the Connecticut Garnet Trail. These small almandine crystals had weathered from the schist and were stuck in cracks and along the base of the steep roadcut walls.

Massachusetts:  Most garnet in the northeast US and Canada is either almandine or pyrope or a bit of each.  But at one site in Massachusetts, the garnets are different.  We visit Betts Manganese Mine in Plainfield, MA to seek out pink rhodonite, but there are garnets there also and they are also manganese-rich.  They are spessartine, and although quite small, they are a worthy addition to anyone’s garnet collection due to their unique composition. 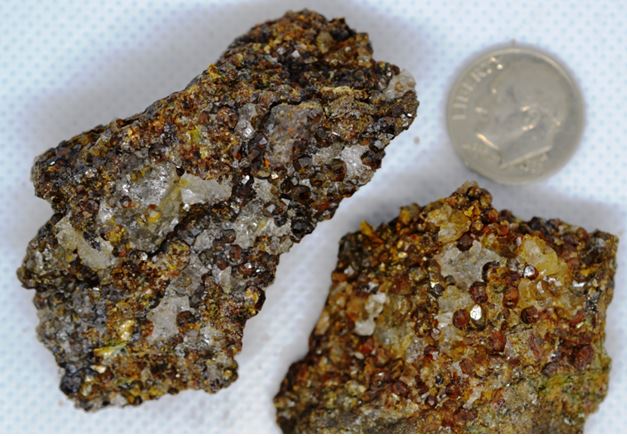 Honey-colored spessartine garnet intergrown with quartz from the Betts Manganese Mine in Plainfield, MA.

Michigan:  Last summer, we poked around in the Iron Range west of Marquette and found small broken chlorite and/or chamosite replaced garnets on a couple of mine dumps near Nauganee.  I saw enough to know I’d like to have a nice example, so when I saw one at the Copper Country Gem and Mineral Show later that week I added it to my collection.  It is not self-collected, but it is a site I did visit! 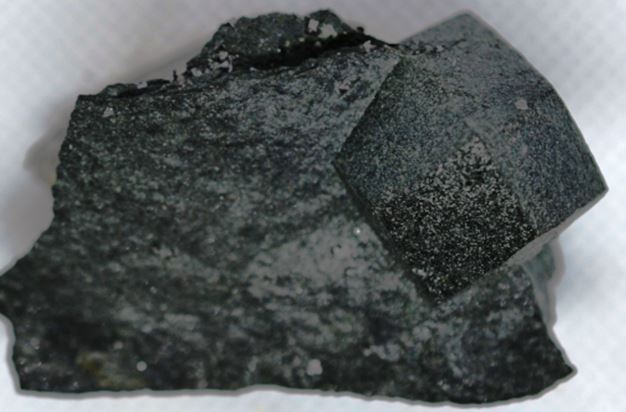 Chamosite after almandine in a hematite schist from the Spurr Mtn. Mine in northern Michigan. The faces on this 1” garnet are perfect and display much better luster than this picture shows.

Ontario:   There are many garnet localities in Ontario, but two stand out in my collecting history.  WCGMC has not been to the large open-pit iron mine in Marmora for several years.  It was closed to collecting, then re-opened, but now closed again.  But when we did visit we sure found garnet.  The garnets there are andradites (calcium-iron) and were formed in limestone when diorite intrusions cooked and altered the limestone leaving magnetite worth mining and garnet/epidote/pyrite, etc. worth mineral collecting.  The iron mine closed in 1979, but the dumps have been used for aggregate and when that was ongoing clubs could organize trips to the site. 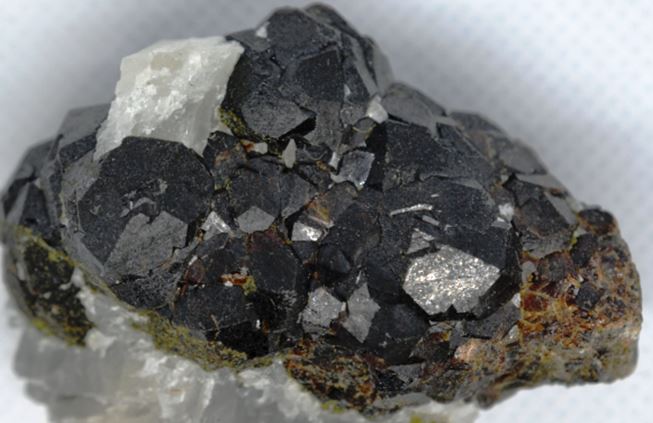 My favorite self-collected andradite garnet from Marmora on a trip with the Buffalo Geological Society is a 2” miniature with a tight cluster of crystals with a bit of quartz showing on one end.

I have saved the best for last.  For each of the past 4 years, WCGMC has made sure that their Ontario collecting trip included a stop at River Valley northwest of North Bay.  In fact a couple of years ago we stopped on the way to Cobalt and then again on the way back.  The site is remote, it is bear country, and it is garnet heaven. 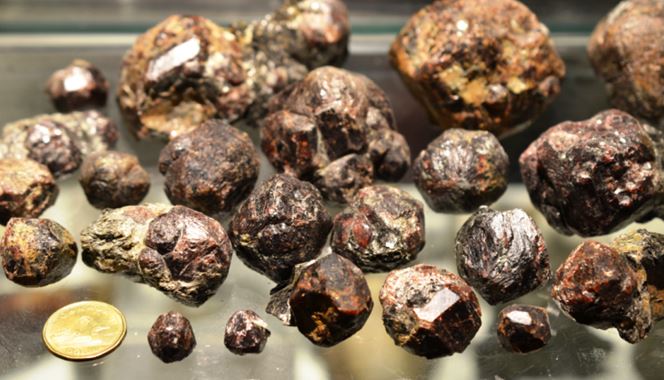 A couple of dozen River Valley almandine garnets and one lonely Canadian loony for scale.