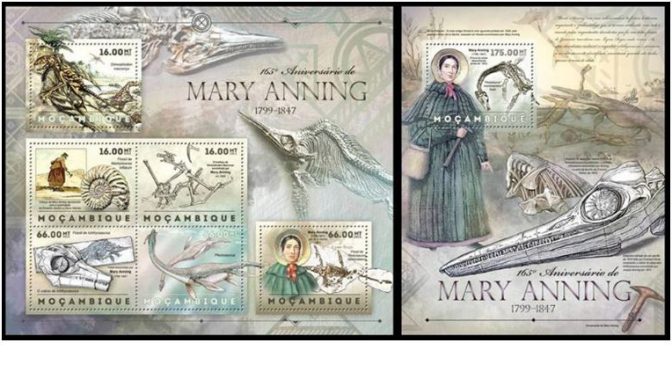 I am a member of the Rochester Academy of Science Fossil Section.  In last month’s newsletter (called the Fossiletter), Michael Greiner wrote a wonderful biographic note on Mary Anning touching aspects of her professional accomplishments and her personal life.   Mary was an early 19th century paleontologist in England who is credited with discovering and describing several Cretaceous marine reptiles including Plesiosaurus and Ichthyosaurus.  I enjoyed learning about her fascinating contributions to paleontology.

After reading the full article I wondered if Mary Anning had ever been commemorated on a postage stamp.  Yes, I collect postage stamps with a thematic specialty of geology on stamps.  This includes minerals, fossils, dinosaurs, volcanoes, and yes, famous geologists.  I was not aware of any Mary Anning stamps, but I did know where to look for them.  And I found a few.

The first commemorative stamps I found honoring Mary Anning was a set of seven issued in 2012 by Mozambique  (Figures 1 and 2).  The set honors the 165th year of her passing.  They are very nice looking stamps and include a great deal of detail about Anning, both on the stamps and in the selvages.   Six of the stamps are set into a background with a fossil plesiosaur and ichthyosaur (Figure 1).  They depict various themes from Anning’s paleontological research.  Mary herself is depicted on two of the stamps.  Personally, I like the 66 MT stamp on the lower right with her standing beside a Plesiosaurus dolichodeirus. 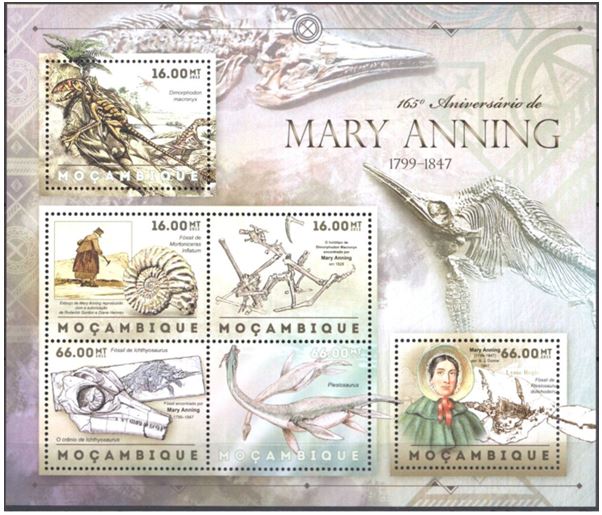 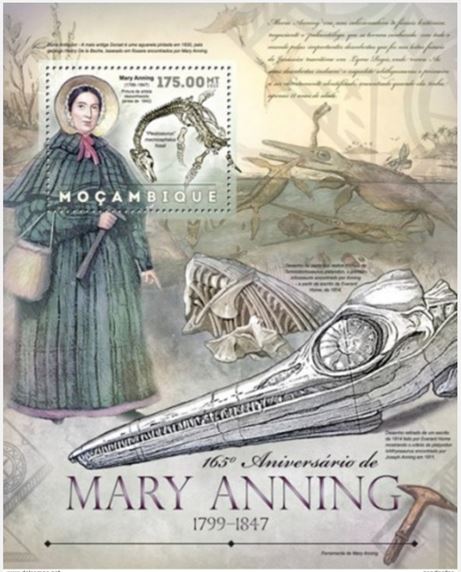 As is typical of many commemorative stamp sets, the highest value of the set is placed in a separate “souvenir sheet” (Figure 2).  For the Mozambique set this sheet includes vivid drawings of both the fossil reptiles Anning studied and also a depiction of them in a Cretaceous Ocean.  I will need to obtain these stamps in order to read the full text inscribed onto the selvage.

Another smaller set I found honoring Anning was a three-stamp set issued in 2014 by Mali (Figure 3).  The set clearly honors Mary with its high denomination stamp in the center.  The secondary stamps feature Saurolophus and  Ammonidea.   Anning likely collected many ammonites in the Cretaceous rocks near her home, but there is no reason to feature a Saurolophus in a set of stamps commemorating Mary Anning.  The large hadrosaur dinosaur was not discovered until 1912, a full 65 years after Anning’s death,  Further, it was discovered and described in Alberta, Canada.  Sometimes, countries issue stamps without full consideration of their content. 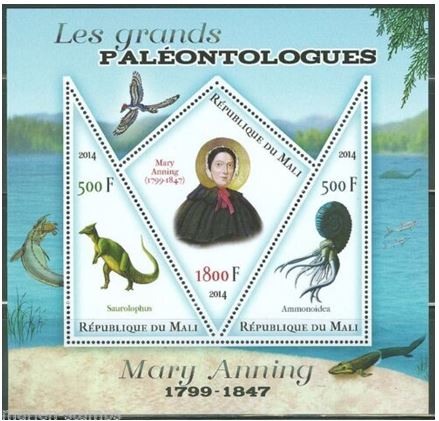 You might wonder why a former Portugese colony in southern Africa and a land-locked, former-French colony in central Africa would honor a British paleontologist whose primary work was done with Cretaceous reptiles found in Great Britain.  The answer is pretty obvious: to sell stamps to collectors like me!

You might also wonder if Great Britain has ever honored Mary Anning in its postal history, after all, Great Britain was the first country to ever issue a stamp back in 1840, seven years before Anning passed away.  The answer is “sort of”.   In 2013, Great Britain issued an attractive set of 10 stamps depicting prehistoric animals.  The set was designed to celebrate the long history of paleontology in Britain by featuring the discovery of a multitude of extinct animals in Britain by British paleontologists.   Although Mary is not included in the stamps, her work is acknowledged in the descriptions provided by the British postal service.    Ichthyosaurus and Plesiosaurus are both featured in the set.   Figure 4 is the Postal Service’s Official First Day of Issue Envelope.

All of this sounds grand until the British Postal Service decided to earmark the self-adhesive set of stamps as “Dinosaurs” and print sheets and envelopes with such labels (Figure 4).   Four of the stamps are not dinosaurs, but rather flying and marine animals.  Errors such as this are very common among the several thousand dinosaur (or not dinosaur) stamps that have been printed onto postage stamps.

If you remain curious about collecting dinosaurs (or other fossils for that matter) on postage stamps you might check out this wonderful webpage (http://www.paleophilatelie.eu/).  It is one of the more comprehensive compilations of thematic stamps available on any topic.