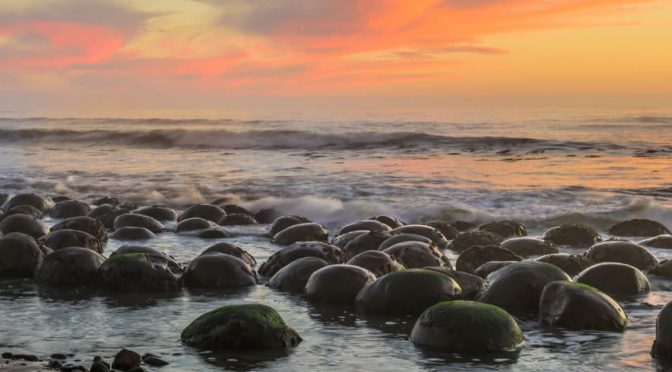 Given the travel restrictions surrounding the coronavirus , it is not possible to do much field planning yet this year, but that does not mean we cannot take some virtual trips.  For starters,  I found an interesting beach with some neat geology.  Bowling Ball Beach is in northern California and there are huge concretions scattered along the Pacific Ocean shoreline.  They call them bowling balls, but they look more like small moons to me.   I decided to learn more about them.

Point Arena, California is part of a small sliver of land sticking into the Pacific Ocean about a three-hour drive north of San Francisco.  Just a few miles south of Point Arena the Pacific Coast Highway passes Schooner Gulch State Park where a short hike down to the Pacific Ocean allows easy access to an extraordinary accumulation of spherical concretions on what is called Bowling Ball Beach (Figs. A and B). 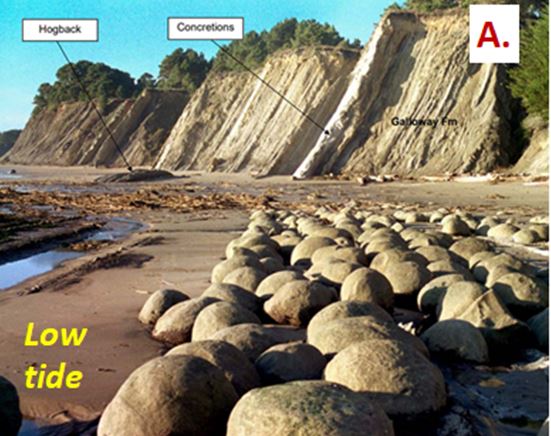 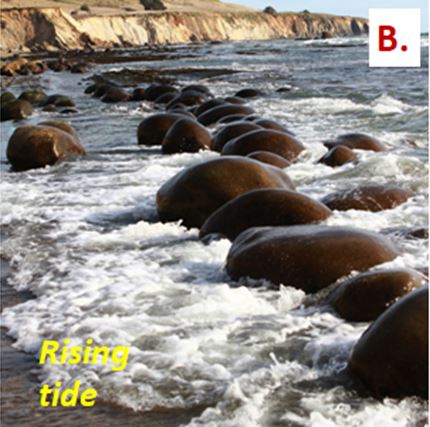 Those of us who walk the creeks in western New York are familiar with the erosion–resistant concretions which can be found littered along some streams beds or exposed in the Devonian rocks (~360-420 million years old) cropping out along streams.  The concretions on Bowling Ball Beach are much larger and the host rocks significantly younger.  The concretions reach three feet in diameter and the host rocks are Miocene in age (20 million years).  The sedimentary units owe their origin to turbidity currents that periodically carried sediment out into the Pacific Ocean along underwater channels.

In the past, theories involving dinosaurs, aliens, and a host of other wild ideas were forwarded to explain how the oversized concretions formed.  Today we know their origin involves a simple sequence of geologic events.  The concretions are restricted to a single sandstone unit within the Galloway Formation, which is pointed out in the cliff face in Figure A.  They formed when silica-cement nucleated and grew concentrically outward.  If this process had been allowed to run to completion, a hard, fully-cemented sandstone would have formed.  But, full cementation did not occur.  Rather, the unit was uplifted and the entire sequence was turned on its end such that the Miocene units are now positioned vertically in the cliffs behind the beach.  Since the sandstone host is not fully cemented it is less resistant to the relentless erosional forces of the Pacific Ocean, and the 2-3’ diameter concretions rest in full view on the beach.

The entire Point Arena region is in itself an interesting geologic occurrence.  The cliffs along the beach represent a thin sliver of Miocene sediments caught on the west side of the San Andres Fault (Figure C.). The sliver is less than 5 miles wide and extends only 50 miles along the coastline.  With time, the daily onslaught of the Pacific Ocean and the periodic left lateral movements along the San Andres Fault will remove this sliver of land while moving it northward.  In just the last 500,000 years the cliffs and the concretions have been moved about 7 miles northwest by movement on the San Andres fault (Konigsmark, 1995).  But don’t worry, they will still be there if you decide to visit northern California.  But do check the tides, the rocks become submerged during high tide. 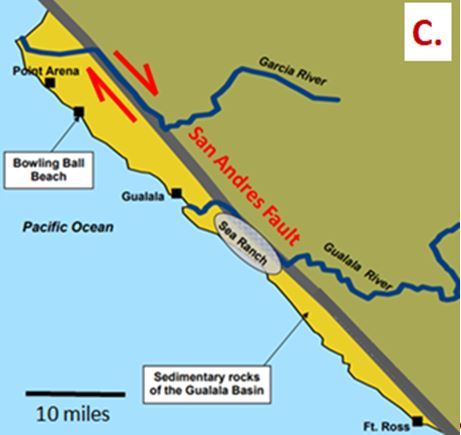 How many noticed the tiny label in Figure A of the Bowling Bowl Beach story that notes a hogback.  Do you know what a hogback (sometimes called hogsback) is?  It is actually a geologic term describing a narrow ridge with steep slopes of nearly equal inclination on both flanks.  Typically the term is restricted to a ridge created by the differential erosion of outcropping, steeply dipping, sedimentary strata.  The drumlins of Wayne County in my home region of western New York fit the shape, but not the origin.  The small feature cropping out through the beach at Bowling Ball Beach fits the definition perfectly.  Here is a close-up: 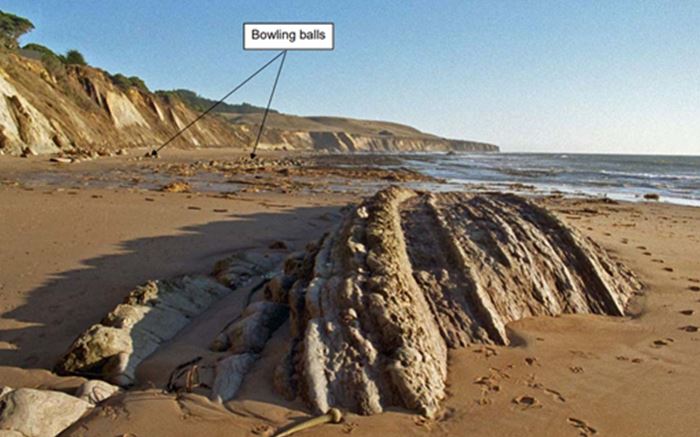