When crystals grow they often do so imperfectly and they can trap material, often along the planes of growth.  These can be solid material, rutilated quartz, star garnet, anthraxolite or other hydrocarbons, etc., or they can be the actual fluid that the crystal was growing from.   Mineral collectors have a name for minerals where these internal fluids are visible.  They call them enhydros and marvel at how the fluid or vapor bubble moves within the inclusion as the specimen is rotated. Geologists refer to them as fluid inclusions and study them for their scientific value.

There is often both a liquid and gas phase within an aqueous fluid inclusion.  This is because the fluid was trapped at high temperature and pressure and upon cooling the liquid contracts and a vapor bubble forms.  Geologists can heat the inclusion and watch the bubble decrease in size and eventually disappear.  In most cases this tells them the minimum temperature at which the crystal grew.  Other gases such as carbon dioxide and various hydrocarbon phases can form as the mineral and its liquid inclusions cool.  But there can be more than liquid and vapor inside a fluid inclusion/enhydro.

Hot fluids migrating within the earth’s crust or being released by a cooling magma are often saturated in various minerals.  They are often saturated in salts (like halite-NaCl or sylvite-KCl).  Upon cooling, salt crystals begin to precipitate within the inclusion.  Tiny, micron-sized cubes of halite can grow.  [A micron is 1/1000th of a millimeter, i.e. very small!]  These micro-micro minerals can be viewed in thin polished sections under powerful microscopes and identified by their form and character or sometimes by electron microscopes.  Geologists call these daughter minerals because they are younger than the inclusion within which they reside.  They can be very useful indicators of the type of solution from which a mineral grew. 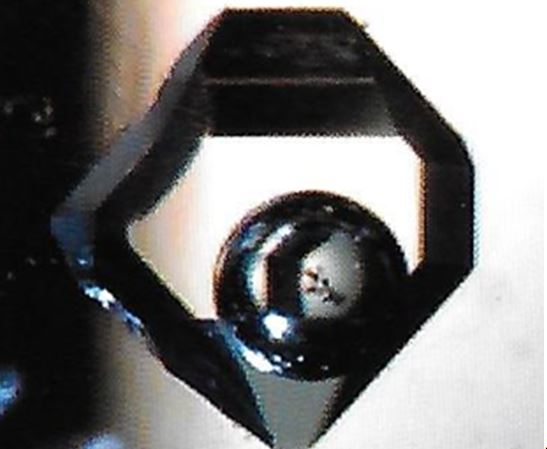 This tiny fluid inclusion inside a Herkimer diamond from Treasure Mountain Mine in Little Falls, New York contains liquid with a large round vapor bubble. Inside the vapor bubble is a dendritic solid hydrocarbon phase. The negative crystal shape of the inclusion is evidence that this inclusion was trapped when the Herkimer diamond was growing. (Figure 163 from Walter, 2014).

There are more exotic minerals found in some inclusions.  Granitic magmas contain metals as dissolved elements, but these elements do not fit into the lattice structure of the primary minerals that crystallize from magmas (feldspars, quartz, pyroxenes, etc).  As magmas cool to form igneous rocks like granite, metals are concentrated into a water phase that separates from the magma.   These waters have very high salinity which permits the metals (copper, lead zinc, etc.) to be dissolved in solution as positively charged cations balanced by negatively charged chloride ions (Cl).

When these waters are released from the magma (the geologic term is exsolve), they often do so violently, and fracture the surrounding rocks.  The vapors/waters move through these rocks and cool quickly while depositing minerals in the fractures to form mineralized veins.  The fluids are silica-rich and quartz is the dominant mineral, but metal bearing sulfides are also deposited.  The large porphyry  copper   deposits  of  the  southwest United States are formed by this process with chalcopyrite being deposited in the fractures.  Later the copper sulfides can be oxidized into the wondrous blues and greens of azurite, malachite, chrysocolla and turquoise we seek from places like Bisbee, Arizona or Chuquicamata, Chile.  But that is another story.

Fluid inclusions in quartz from hydrothermal ore deposits can be full of exotic daughter minerals.   With original temperatures at the time of entrapment of several hundred degrees centigrade, these fluids often carry large quantities of salt and metal ions in solution.  As they cooled, they lose their capacity to hold ions in solution.  Minerals like chalcopyrite, hematite, and gypsum can form in fluid inclusions along with the more common salts, halite and sylvite. 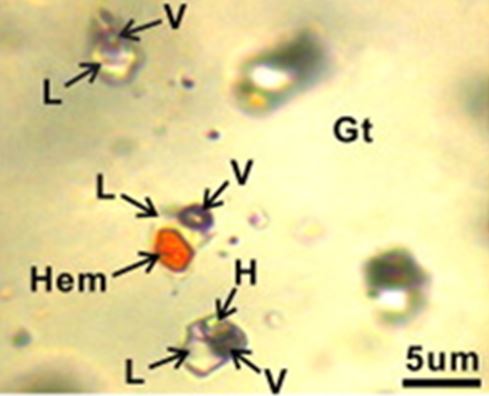 These inclusions are in garnet associated with large iron deposits in the Huanggang District of China. Magmatic waters separated from a granitic intrusion and altered the surrounding limestone to garnet- and pyroxene- bearing skarn. The fluid inclusions within the garnet reflect the chemistry of those highly saline and iron-rich magmatic waters. In addition to liquid (L) and vapor (V) phases, they contain daughter minerals such as halite (H) and hematite (Hem). (Mei, et. al., 2015).

Inclusions containing micro-micro/ daughter minerals are neat to view in the microscope, but as you look at the pictures in this note, it is interesting to think for a moment about the geologic history that is stored in those little drops of fluid and the solids that formed within it after it was trapped.  If the tiny drop of fluid was trapped when the crystal grew (geologist’s refer to these as primary fluid inclusions) then it has been chemically isolated for hundreds of millions of years or more depending on the age of the mineralization.

The mineral hosting a fluid inclusion may have formed at great depth and only have been recently exposed after eons of uplift and erosion.  Inclusions in quartz pebbles within a conglomerate will reflect the origin of quartz that predates the formation of the rock within which it now resides.  But inclusions in a wide variety of rocks permit the history of the mineral/rock to be unraveled if analyzed properly.

Gemologists observe the fluid inclusions in sapphires and other gems to learn if they have been heat treated to enhance their color (Koivula, 1986).  The inclusions can not survive the heating required to alter the color of a sapphire.  If the inclusions are intact and still contain CO2 then the gem has not been altered. 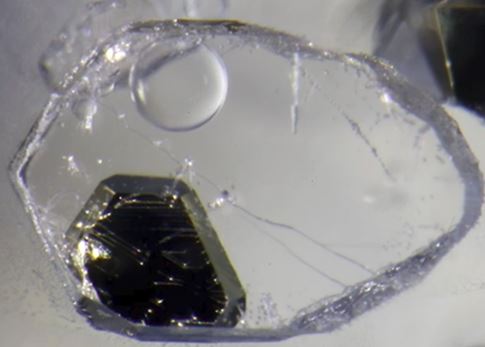 Gemologists also use fluid inclusions. This 30 micron inclusion in sapphire (corundum) is from Sri Lanka and has a metamorphic origin. The inclusion contains a CO2 liquid phase, a CO2 vapor bubble and a large hexagonal graphite daughter mineral. Check out the interesting video link in Renfro et. al. 2016 to observe a CO2 inclusion change as temperature is varied. 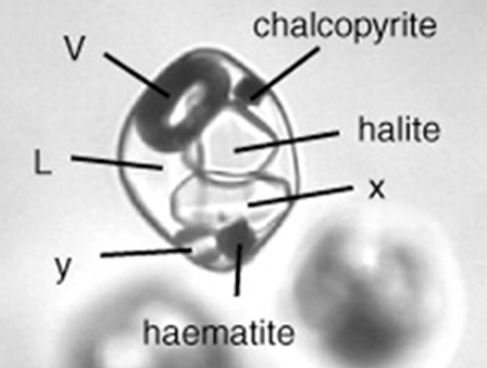 This inclusion is from quartz vein in a porphyry copper deposit. It is only 30 microns across, but contains at least five daughter minerals in addition to a vapor phase and some liquid. Halite, chalcopyrite, and hematite are identified. X is likely sylvite, y is an unknown phase (Ulrich et. al., 1999). Note the British spelling of hematite in the illustration.

Is it any wonder that geologists seek out, and literally salivate, over the opportunity to study the content of fluid inclusions from their favorite ore deposit or geologic project?