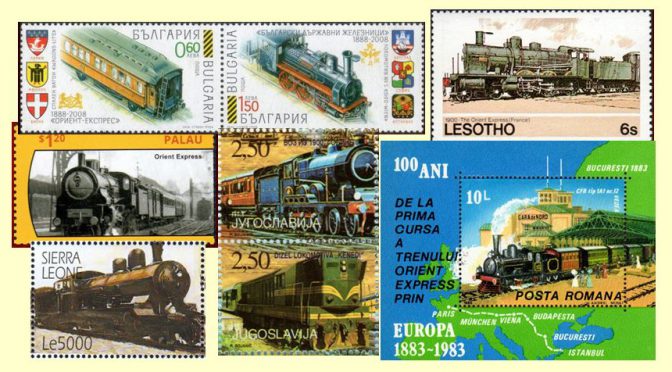 RPA member Luis Greiff Jr. has been interested in the Railway Post Office (RPO) for a long time.  Recently that interest drew him to investigate the history and philatelic material of the European passenger train services of the Orient Express.  At our January 25th club meeting Luis shared what he had learned and acquired about postal history and the Orient Express.  You can view Luis’ full presentation on the meetings page of the Rochester club’s website (Link).

2008 marked the 125th anniversary of the Orient Express train line. Serbia was one of many countries to honor the quasquicentennial of this famous line of trains.

It was, of course, the postal service and the worldwide stamps issued to honoring the train that interested Luis.  Countries for A (Austria) to Z (Zambia) have issued stamps commemorating events, places, or people associated with the Orient Express.  Train enthusiasts can focus on the various styles and vintages of engines or cars depicted on the stamps.  Maps of the train route interest cartophilatelists. A wide swath of European history is covered and famous people from all walks of life who travelled on the train are depicted on stamps.  Yes, even Disney characters got their turn on stamps from Uganda. Below are a few of the issues that Luis has acquired and that he shared with us.

Many countries, like Dominica (in 1987) and Hungary (in 1979) chose to depict older engines in their stamps. Our club’s train enthusiasts can likely tell us more about these early train engines.

More recent trains are shown in these Orient Express renditions by Chad in 1972 and Grenada in 1982. Wonder how many folks in Grenada know what that white stuff is?

Of course, Agatha Christie and her epic murder novel gets honored in many stamps also (Great Britain 2016, one of six) 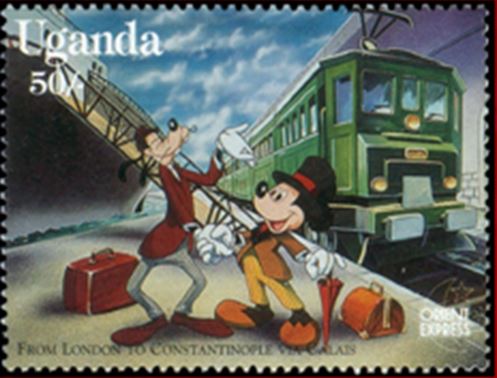 The list of characters that have ridden on the Orient Express is pretty long also. This set of ten Uganda stamps from 1996 is likely designed to attract several groups of topical collectors. 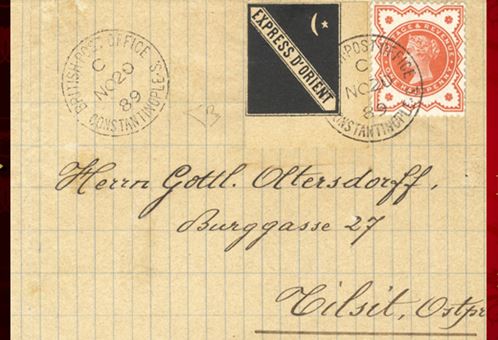 The Orient Express even had its own postage, with a half pence for an additional fee. This letter was cancelled by the British Post Office in Constantinople on Nov. 20, 1889 and sent to Tilsit (in East Prussia). Envelopes with this additional stamp are rare and valuable. Luis regretted that he did not own this piece of Orient Express postal history.