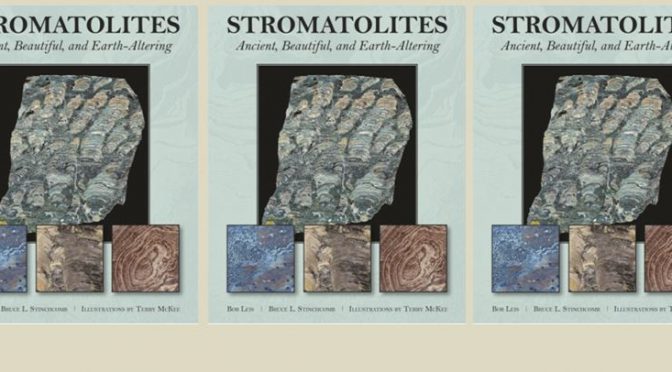 The full title of the book is Stromatolites: Ancient, Beautiful, and Earth-Altering.  The introductory chapter defines and describes stromatolites as the earliest undeniable fossil evidence of life on earth, somewhere around 3.4-3.5 billion years ago.  Stromatolites are actually not fossils in that they do not preserve actual body parts of ancient organisms.  Rather they are trace fossils, indirect evidence of cyanobacterial organisms that once coated surfaces in a tidal zone marine environment.  But that certainly does not detract from their geologic importance or inherent beauty.

Leis’ first encounter with stromatolites was in northern Minnesota when he purchased a polished slab of 1.8 billion year old, colorful Banded Iron Formation, affectionately named “Mary Ellen Jasper”.   That piece, and others acquired soon after, set him off on a two decade mission to understand and document stromatolites, first locally, then nationally, and eventually globally.  Interestingly, several WCGMC members can recall our pleasure in collecting this same red banded material west of Thunder Bay, Ontario two summers ago.  We’ve also collected stromatolites in Cambrian rocks at Ace of Diamonds and in Silurian rocks in our own backyards at Walworth and Penfield Quarries.  I wonder if this book and these encounters will inspire any of us to become hooked.  As Leis likes to say, “Pond Scum Rules.”

Stromatolites are found in the world’s oldest sedimentary sequences. Although less widespread, they remain around today.  The first half of the book progresses through the style, role and environments of stromatolite occurrence through geologic history.  You can also learn how the cyanobacteria that produced stromatolites is responsible for the introduction of free oxygen into the atmosphere.  Ironically, this led to the proliferation of life forms that fed on the bacteria thus limiting the environments where cyanobacteria could thrive.

One of the most wondrous aspects of this book is its photographs and illustrations.  There are 636 figures and illustrations distributed purposely throughout the text (and 636 is not a mistype).  Almost all are in color and most depict the unique character, color, style and layering of the subject stromatolites.  All are carefully and completely identified by location and age.  Chapter 10 details where you can find stromatolites in museums, in rock shops, and in the field.  Armed with this book no one should have any trouble finding and identifying these unique and important trace fossils.