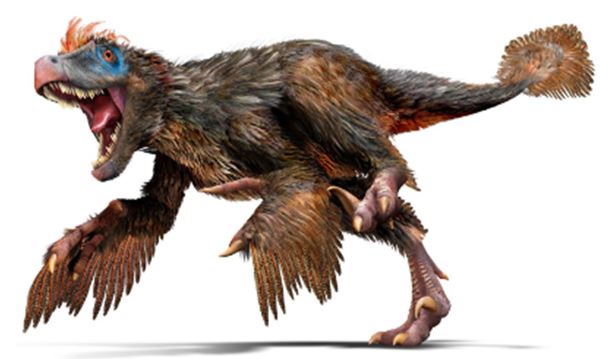 Well, researchers in Regina, Saskatchewan working with colleagues in China have made a remarkable find within a 99 million year old piece of amber.  Chinese researcher Lida Xing had acquired the amber in 2015 from collectors in Myanmar and immediately recognized the significance of the preserved material.  Ryan McKellar, curator at the Royal Saskatchewan Museum, helped to identify feathers attached to a small dinosaur tailbone preserved within the amber. 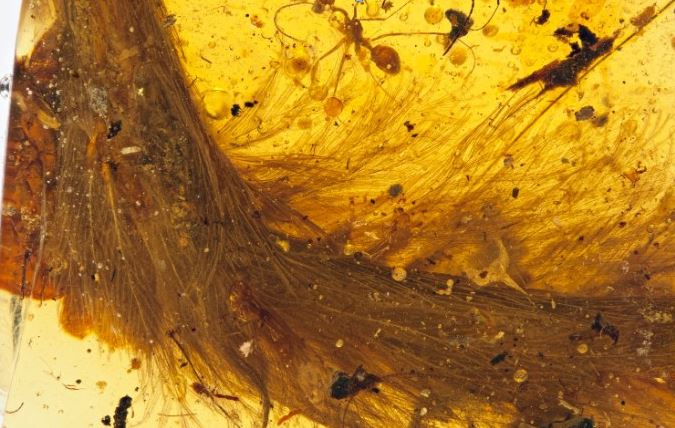 The tailbone of a Cretaceous Period juvenile dinosaur remarkably preserved in amber and covered in feathers. Field of view in this photo is about 2”. The darker specs within the amber are ants, pieces of beetles and a bit of plant material. (from Graham, 2016)

Although fossilized and preserved feathers have been found in proximity to dinosaur remains for nearly two decades, it is often difficult to prove they were actually from the dinosaur and not perhaps from prey recently captured by the therapod predator.  Furthermore, the intricate morphology of previously discovered Mesozoic therapod feathers was often disturbed or destroyed by the processes of burial and lithification.  Not so in amber where the finest detail of the original feather can be observed. 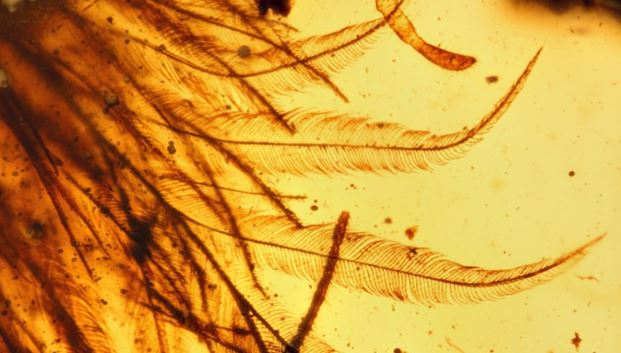 A close-up of dinosaur feathers preserved in amber: Note the perfect preservation in this piece that is only 3 mm across. (from Xing et. al., 2016)

Because of the excellent preservation provided by the amber, McKellar could observe the morphology of the tailbone and identify the 8 connected vertebrae of a small dinosaur.  He could also study the detail of how the feathers are attached.

Chinese researchers (Xing, L., 2016) have used specialized X-ray equipment to study soft tissue (muscles and ligaments) and even trace amounts of hemoglobin trapped within the amber.   The recognition and isolation of preserved organic molecules dating to the Mesozoic is not a precursor to the cloning or revival of extinct species.  Proteins and amino acid remnants in preserved organic matter are not DNA.  However, it is an incredibly important find for researchers working to accurately place dinosaurs and other extinct species into the evolution of life on earth.  The world of paleontology has a new frontier to explore.