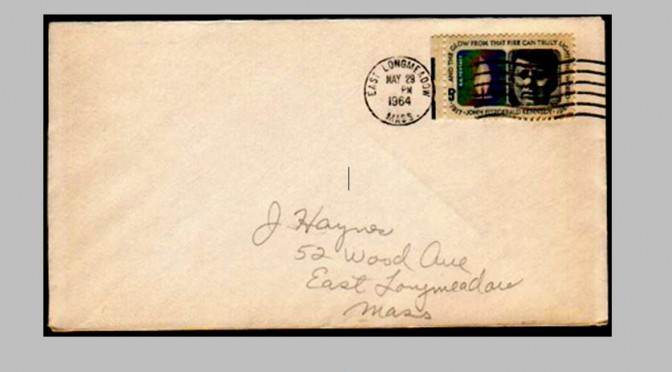 A fellow member of the Rochester Philatelic Association likes to stimulate her Facebook friends by placing a theme word or phrase onto her Facebook Timeline each day and having her friends post philatelic responses.  Well, one day in late January her theme was simply “my town”.

I decided to seek out postmarks from the many locations I have lived.  Naturally, I started with my hometown of East Longmeadow, MA.  I opened Google Image Search and simply typed:  “East Longmeadow postmark”.  I was rewarded with a page of image snippets some of which actually met my intended search criteria.  About two rows down in the middle of the screen I saw this excellent and legible postmark atop the five cent 1964 John F. Kennedy stamp.  I hit enter.

And that is where the coolness arrived.  I had opened a First Day Cover envelope.  The owner and poster of the FDC had captioned the envelope simply “uncacheted fdc with nice wavy line machine cancel”.  No big deal, but then I read the address! 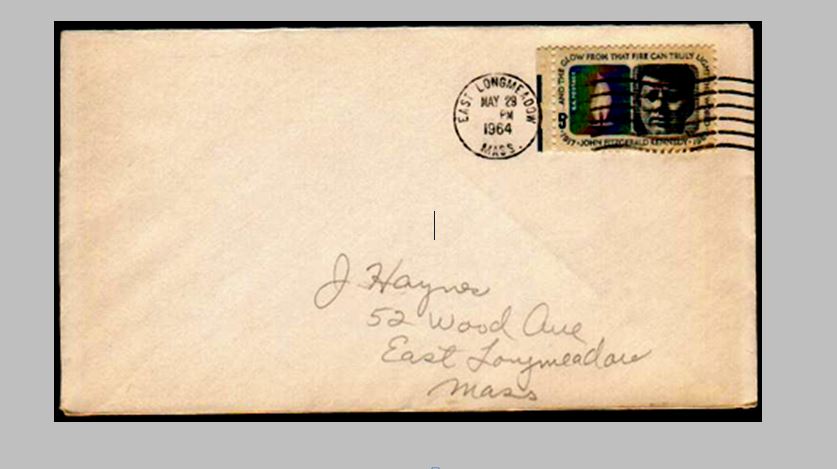 It was my childhood home address and the envelope had been self-addressed by my father, John Haynes.  On May 29, 1964 my dad had apparently visited the post office and mailed himself a cover on the first day of issue of this JFK Memorial stamp issue.  And now some 53 years later that envelope had magically appeared on my computer screen after a simple search for a postmark.  In May of 1964, I was 9 years old.  Now at 61, I was speechless in my den.

As it turns out, after my dad passed away a bit over a decade ago, my mom (with permission from both her sons) had donated his extensive postmark and cover collection to the Post Mark Collectors Club, headquartered in Bellevue, Ohio, and probably to others.  From there, or perhaps after multiple exchanges, this FDC now belongs to a collector of JFK philatelic material and in 2013 he chose to document it with an entry on Stampboards.com.  He included a nice paragraph discussion about the town I grew up in and the red sandstone quarries for which it is famous.  The post was one of many of his featuring FDC with the same stamp.

I am not a member (yet) of Stampboards.com, so I cannot attempt to reach out to the new owner and give him a little more history on the stamp collector who originated this piece of philatelic history.  I guess I could/should do this.  Perhaps it will become possible to add to this philatelic story.  It has already been a most interesting find for me.

One thought on “How Cool is This”