Published in the July WCGMC newsletter

Rubies are red, very red.  Rubies are hard, very hard.  In fact with a hardness of 9 on the Moh’s scale, they fall just below diamonds as the hardest natural mineral on earth.  Ruby is also the birthstone for July, the seventh month in the Gregorian calendar.

Ruby is the gem name associated with the red variety of the mineral corundum (blue corundum is sapphire and is reserved for the September birthstone).  Corundum is a very simple mineral, both structurally and chemically.  The corundum lattice consists of hexagonally close packed oxygen atoms with two thirds of the gaps between the octahedrally aligned oxygen atoms occupied by aluminum.  This results in the simple formula, Al2O3.  And when a very small amount of chromium replaces some aluminum the crystal turns ruby red.  If there are no other impurities of note, a gem is born.

Structurally, corundum is a hexagonal mineral that crystallizes in the trigonal system (i.e. with 3-fold symmetry).  Barrel shaped crystals predominate, with very flat pinacoidal tops.  Numerous modifications are possible both horizontally and vertically to the basic hexagonal or trigonal faces.  Crystals can be short and stubby or tall and tabular with bipyramidal faces that cut deeply into the basal pinacoidal face.  Crystals are often striated and etched.  They do not exhibit cleavage, but can fluoresce orange, yellow or red in shortwave ultraviolet light.

Corundum is a high temperature mineral that crystallizes from magma or is formed during high grade metamorphism of sedimentary rock that is generally low in silica such that the available aluminum is not all consumed in feldspar.  This includes several types of low silica igneous rocks like syenite, and metamorphic rocks like mica schist, gneiss and some marbles.

The best (purest and reddest) rubies arguably are those from Myanmar (Burma), although folks in Sri Lanka (Ceylon) and perhaps Pakistan might disagree.  Recently, Madagascar and Tanzania in southern Africa have produced quality gem rubies.  Lower quality rubies and lots of corundum have been recovered from several sites in North Carolina.  Because of its density (corundum is 50% denser than quartz) and its hardness, many of the active mining locations for rubies are alluvial deposits where the gems have been concentrated in sediments left by streams in a similar fashion as placer gold. 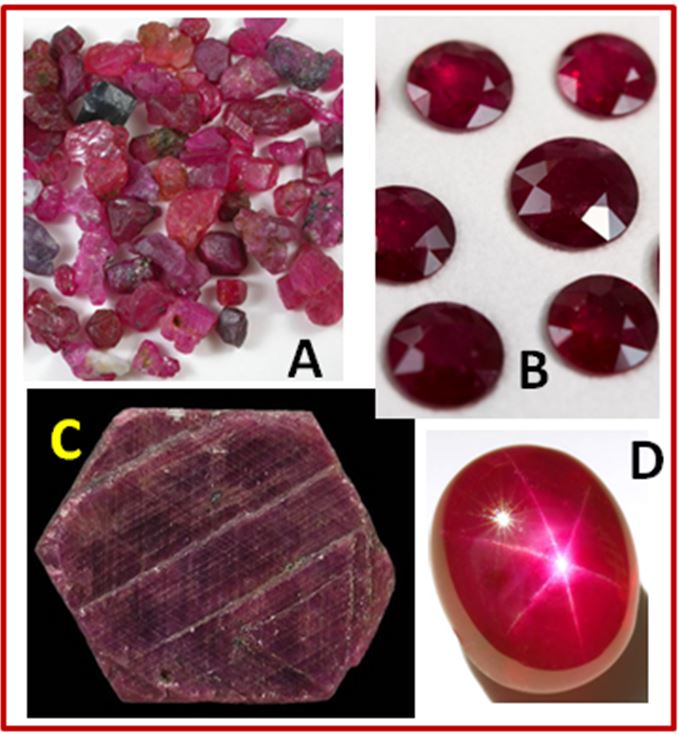 Corundum and Ruby: A and B – raw and cut rubies from Myanmar, C) looking down on the striated pinacoidal face of a corundum crystal, D) a star ruby where needle-like rutile inclusions cause a six-sided star to shimmer over the stone.

Wayne County trips to the Adirondacks and to the Bancroft area in Ontario have yielded corundum with red color, although no gem rubies.  Small red corundum can be found sprinkled in the calcite-diopside-scapolite matrix of the Purple Diopside Mound at Rose Road, Pitcairn, NY.  The Burgess Mine in Hastings Co., Ontario was mined for corundum from 1902-1917.  Now, silvery terminated corundum crystals with a reddish tint can be collected on the dumps.  They are embedded in a syenite gneiss, but often display their hexagonal and pinacoidal faces. 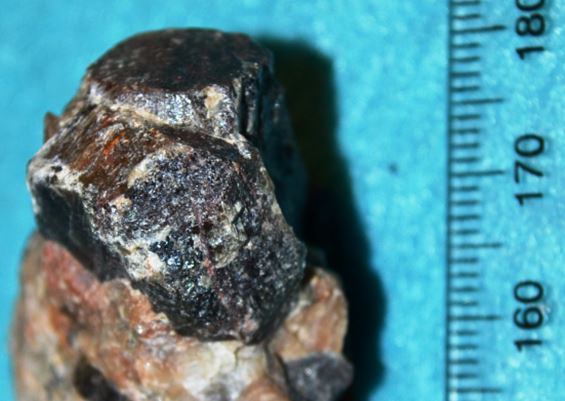 It is not a ruby, but this 20mm twinned corundum from the Burgess Mine in Canada does reflect a reddish tint. This piece and many others were collected on Watne County Gem and Mineral Club trip in September, 2014.

Jeršek, M, and Mirtič, B, 1999, Corundum from Philep Dolomitic Marble in Macedonia, Journal of the Slovenian Museum of Natural History, No. 41, p 1-22.