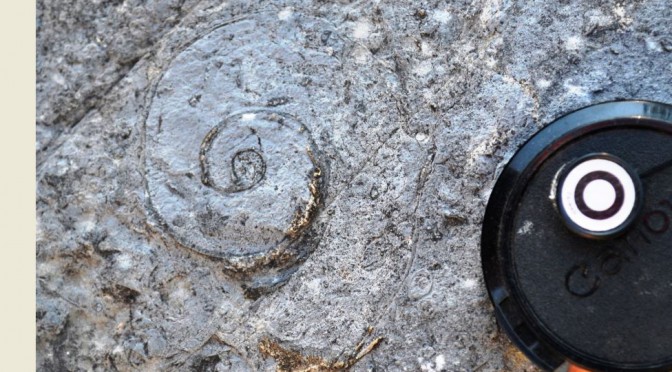 The New York State Geological Association (NYSGA) held its annual meeting in Plattsburgh in September.  The event, hosted by SUNY-Plattsburgh, featured field trips to several Adirondack sites and I attended one on both days of the event.  But we will leave that to a subsequent post.  This note focuses on an outcrop just outside Plattsburgh where the gastropod Maclurites magnus can be found.  Encouraged to visit the site by a SUNY-Plattsburgh geology student, I found time Tuesday September 15th to spend a couple hours walking the outcrop with New York Paleontology Society Field Trip Leader Ray McKinney, who just so happens to live in Plattsburgh.  Meeting him on this trip was an unexpected bonus to attending NYSGA.

Resistant Ordovician limestone units crop out continuously on both sides of Highway 374 just west of I87 exit 38.  The ten to fifteen foot high interbedded limestone units can be investigated by either walking along the top of the outcrop while viewing the large coiled members of the Mollusca phylum on exposed bedding plane surfaces or by walking along the face of the outcrop and viewing the section vertically.  In either case the trick is not finding Maclurites, it is finding them that are both complete and recoverable.  The rock is very hard and does not want to break either across bedding or along it.  There are joints, but inevitably they either cut through a desired gastropod or are too far from it to be useful. 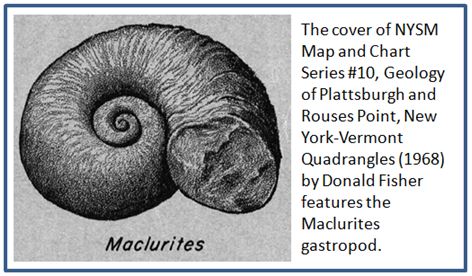 The ancient gastropods are found in the Middle Ordovician Chazy group section, in both the Valcour Limestone and Crown Point Limestone Formations, although the later seems to receive the most attention in the fossil collecting literature.  Although I did extract a few specimens to carry home to Rochester, my best “specimens” were captured digitally.   Can you see the two joints running NE-SW across the bedding plane surface in the cover photo above.  Hard to imagine extracting that 450 million year old fella without the hard limestone breaking along those  joints. 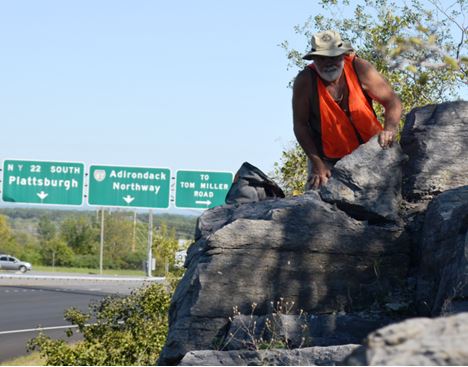 My collecting colleague Ray McKinney shows off a slab of Crown Point Limestone he has removed from the top of the outcrop. On close inspection the piece did contain partial Maclurites fossils, but nothing spectacular. Note the proximity to the interstate exchange!

Interestingly, there is a local rock quarry hidden just behind the outcrop on the south side of Highway 374.  We even parked our vehicles on Quarry Road!  Ray has not sought entry to the quarry for fossil collection, but perhaps will check out that opportunity in the future.