Article I wrote for the March, 2014 WCGMC News

If Time is Relative, Geologic Time is Exponentially Relative

The geologic time scale is a difficult concept for humans to appreciate.  We live less than 100 years, the Vikings came to America 1000 years ago, our current calendar just passed the 2000 year mark, and Stonehenge dates almost 5000 years old.  That, we say, was a long time ago.   But these are mere seconds on a geologic clock. Even the final Ice Age advance that generated upstate New York’s topography and fertile soil ended a mere 12,500 years ago.

Now think about this.  Dinosaurs roamed and dominated much of the planet for the entire Mesozoic Era.  For over 160 million years (MY) they lived, and died until going extinct about 65 million years ago.  By comparison, humans have been inhabitants for just under one million years.  And all but the last 6000 years or so of that is referred to as the Stone Age, the period before metal was worked and likely before crops were cultivated.

When we go to Penn Dixie, we split shales and dig up trilobites that lived about 380 MY ago in ancient seas.  And then we can read about the New York State Fossil, the Eurypterid, that lived in shallow tidal pools about 420 MY ago.  We know that was a long time ago, but do we appreciative how long ago?

When we travel to Herkimer county to dig “diamonds, do we stop to think that the host dolostones are half a billion years old, a proverbial drop in the bucket of geologic time.  In human terms, the earth was already an aging grandfather when the Silurian Eurypterids or the Devonian trilobites were scavenging for food.  Or when they were finding a proper place to die so as to be preserved for several hundred million years until you come digging on a sunny Saturday in June.

By studying radioactive isotopes, and counting fission tracks in apatite crystals, geologists have learned that the major phase of much of the metamorphism in the Adirondacks occurred in what is called the Grenville orogeny and that this took place 1.1 billion years ago.  That is ancient by any standard, but consider that studies of asteroids and other extraterrestrial matter indicate that the earth is 4.5 Billion years old.  The oldest dated material on earth are zircons from a 3.0 BY old sedimentary conglomerate in Australia.  These detrital zircons date at 4.35 BY, indicating an origin from host material that is otherwise gone.  Next summer when you visit the Adirondacks, contemplate this:  the earth had been around for 3.4 billion years, or 75% of its long life, when the Grenville orogeny was metamorphosing the rocks under your feet.

And, next time you prepare to swing your 16 pound sledge to expose that vug, or just to break the darn rock to see what might appear, you might want to pause a moment and reflect on just how much older that rock is than you.  Or not. 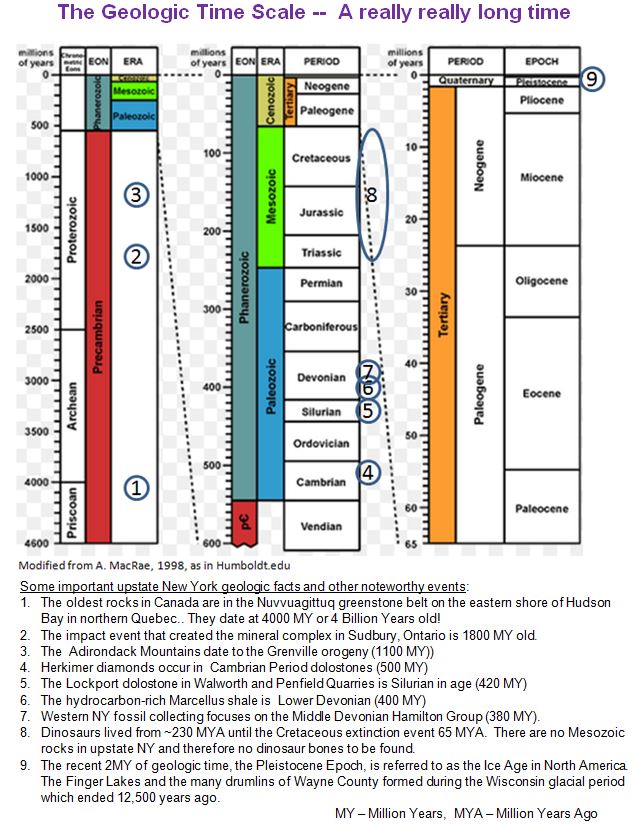