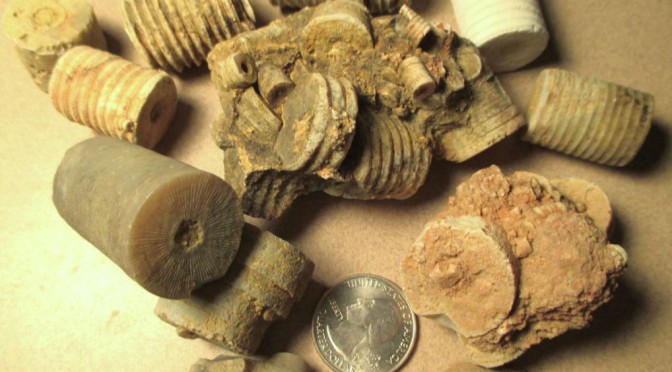 In mid-November, 2013 Wayne County Gem and Mineral Club member Linda Schmidtgall and her husband Les made one last collecting trip before winter.   And they were smart:  they pointed their fossil hauling Chevy pickup south and travelled to north central Tennessee to hook up with the Knoxville Gem and Mineral Society and the Georgia Mineral Society on their annual fall crinoid and coral “harvest”.  Fossil hunting along the shorelines of the Tennessee and Kentucky lakes is best when the water level is lowest in late fall and crinoid fossil remnants can be collected by the bucket full.  Stem sections, or cemented crinoidal hash locally referred to as crinoidal plates, can be collected along the shoreline or just below the water line.  All are fully silicified into grey or light bluish chalcedonic chert. 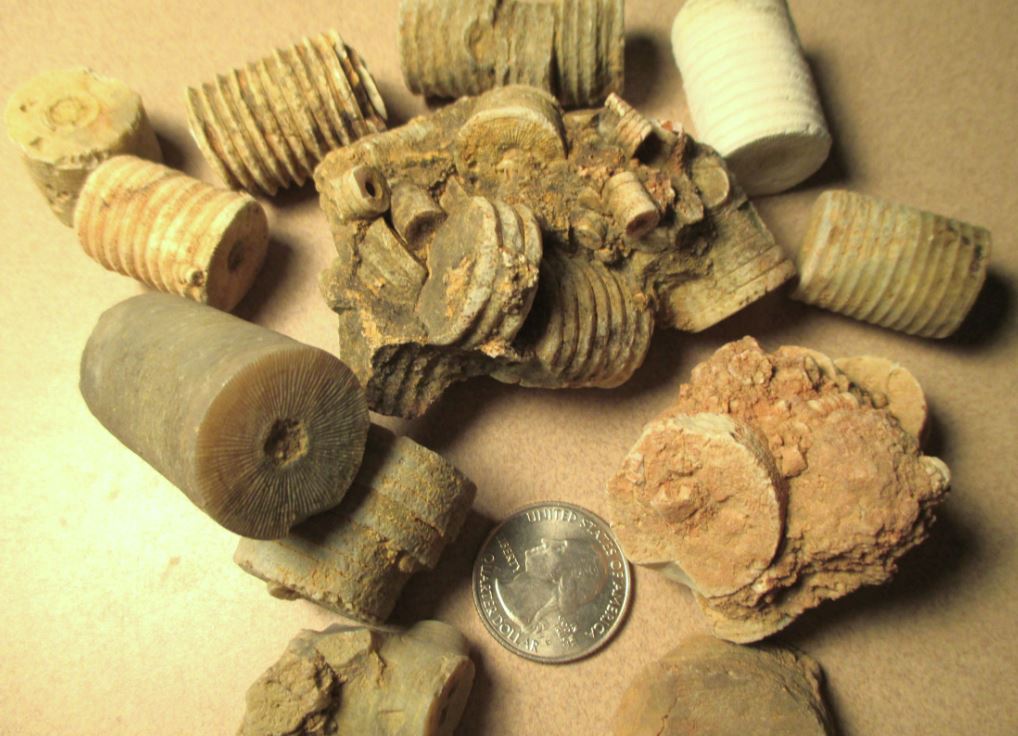 The crinoidal debris around Dale Hollow Lake is from the Fort Payne Formation of Middle Mississippian age.  A number of large stemmed crinoids thrived in the seas that covered the Tennessee-Kentucky region in the Upper Mississippian Epoch some 320 million years ago.   Krivicich (2011) reported that the most common genus from three sites on Dale Hollow Lake is Agaricocrinus.  Without the calyx, species identification is not possible.   Actinocrinites is another common genus.

Crinoids are marine animals from the Class Crinoidae of the Phylum Echinodermata.  Most prehistoric crinoids attached themselves to a substrate with a flexible, circular, segmented stem.  Above the stem food filtering arms extend from a cup-shaped body (or calyx).  The stem length and calyx size are species specific, but also vary based on the environment.  The stems grow as needed to access planktonic nourishment.  The broken and segmented stems were comprised of calcite and therefore commonly preserved in the rock record.  The softer tissues of the calyx and arms require rapid soft sediment burial to be preserved and are seldom found intact.  Although the 30 or so collectors with Linda found stem sections in abundance, there were only 10 identifiable calyces found and Linda found two of them!  One shows the pentagonal character of Agaricocrinus (see below).  The other may be Actinocrinites. 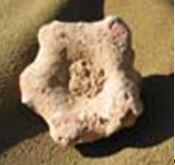 At a second spot, colonized corals were conveniently located in outcrop exposure near Byrdstown, Tn.    Silicified and somewhat iron stained, these small coral colonies grew with bryozoans in carbonate mounds offshore from the Appalachian Highlands that were rising to the south and east in Mississippian times. 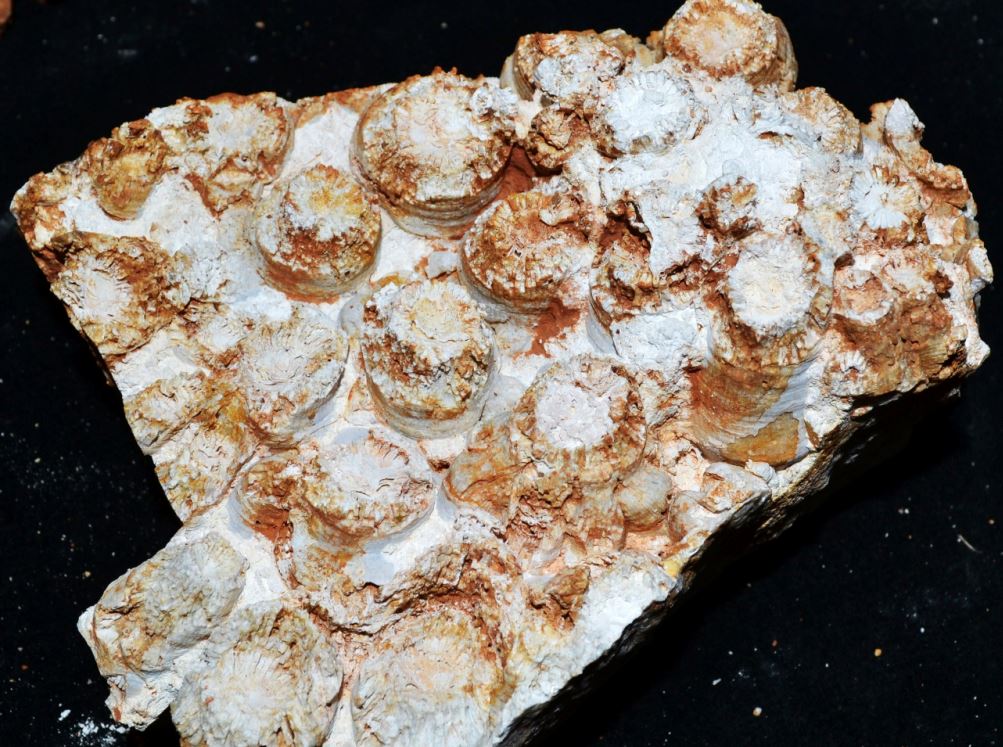 A colonized coral from Byrdstown, TN.  Individual corals are 0.5-0.8 inches in diameter.

Because of their uniformity, pieces of crinoids stems have been threaded onto necklaces for over  1000 years.   In England, they are often referred to as St. Cuthbert’s beads (or Cuddy’s) because of their historic importance in medieval Northumberland.   Their use in rosaries can be traced back to the 12th century, but at that time their origin was assigned to snakes or “devil’s toes”.   Naturalist Martin Lister came closer to the truth when he labeled them as “petrified plants” in 1673.

Side-bar:  The process of silicification

The formation of chert layers and nodules and the silification of fossils such as crinoids within limestones is an interesting process.   Silica released from the weathering of silicate rocks is transported  in solution where it fills the pores of the limestone and fossils.  As the water evaporates with burial, a siliceous gel is formed and with further dehydration, opal (SiO2·xH2O) will begin to encase and replace the carbonate mineralogy of the limestone.   With continued access to silica-laden waters, nodule growth or fossil replacement can proceed to completion.   The transformation of carbonates  to chalcedony/chert occurs via dissolution and reprecipitation processes that are controlled by time and temperature as well as access to silica-laden groundwaters.

11 thoughts on “Collecting in Tennessee”