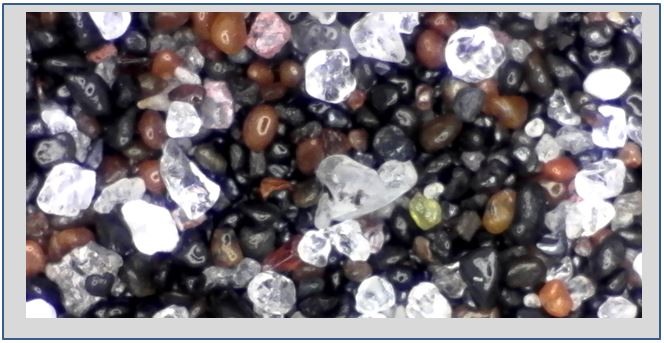 Some sand can be appreciated purely for its color and appearance.  Other times the shapes of the grains or the overall texture of the sand makes it stand out when compared to others.  Of course, a unique geology or an unusual mineral component can help to distinguish a sand also.  Occasionally a beach comes along where the sand displays all three attributes.  I consider the phosphatic sands from Caspersen Beach in Venice, Florida to be such a sand.

I was introduced to this sand when Brian Dear sent me a 20ml sample last November.  And then, when Rochester mineral collector and sand enthusiast Alex Hrakbo told me he was wintering near Sarasota and asked me if I knew of any beaches he should collect at, I gladly suggested he could bring me some from Caspersen Beach.  And that he did, dropping off more than a quart of the colorful sand at my doorstep in April.

The sedimentary phosphate deposits in central Florida were deposited by marine waters during the Miocene Epoch when sea level was 40m higher than it is today.  Upwelling colder waters from offshore created an extremely fertile environment on the shallow Florida platform with extensive algal blooms, phytoplankton and abundant marine life (Hine, 2008).  All this organic matter was rich in phosphorous and the quiet, shallow marine environment permitted its preservation and burial.  With shallow marine burial, chemical reactions converted the mud to microcrystalline phosphate, which was reworked by submarine currents into amorphous pellets. or phosphorite (Hine, 2008).  It is these pellet-shaped grains that are now in the Caspersen Beach sands.

Caspersen Beach is in South Venice, Florida, and just 10 miles south of Siesta Key, itself a famous sand beach for its brilliant white quartz sand.  The sands at Caspersen Beach are black from a distance and present a salt and pepper appearance when viewed up close.  The light-colored components are quartz grains mixed with locally derived shell fragments, but the interesting grains are the black and brown extremely rounded phosphatic grains.

Mineralogically, the phosphate pellets contain appreciable carbonate and were once assigned the mineral name francolite.  However, the grains have highly variable chemistry and lack a distinct mineral structure from fluorapatite, and the accepted mineralogy name for the dark rounded pellets is now ‘carbonate-rich fluorapatite’ (Mindat) with the formula: Ca5(PO4,CO3)3F).  The color ranges from tan to brown to jet black based on the amount of carbonate and other ions substituting for Ca, PO4, and F in the formula (Van Kauwenbergh et. al., 1990). 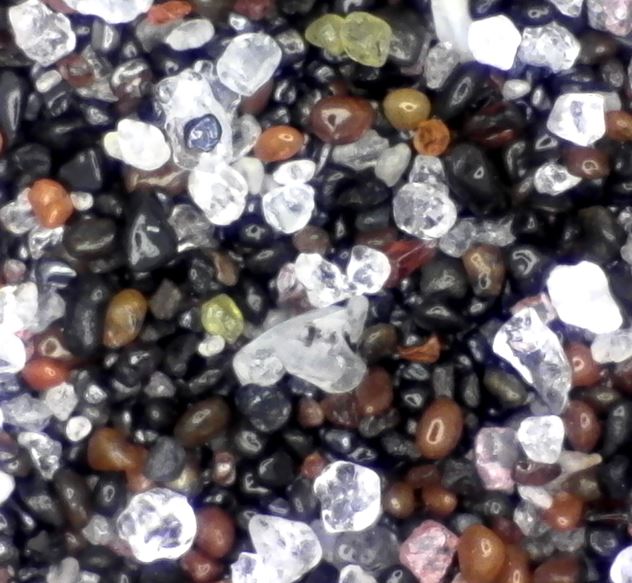 Sand from Caspersen Beach in South Venice, Florida. In addition to the brown and black phosphorite pellets and the clear quartz grains, there are a few pink garnet grains. I do not know what the green grains are, perhaps epidote? The Field of View is ~4mm across. 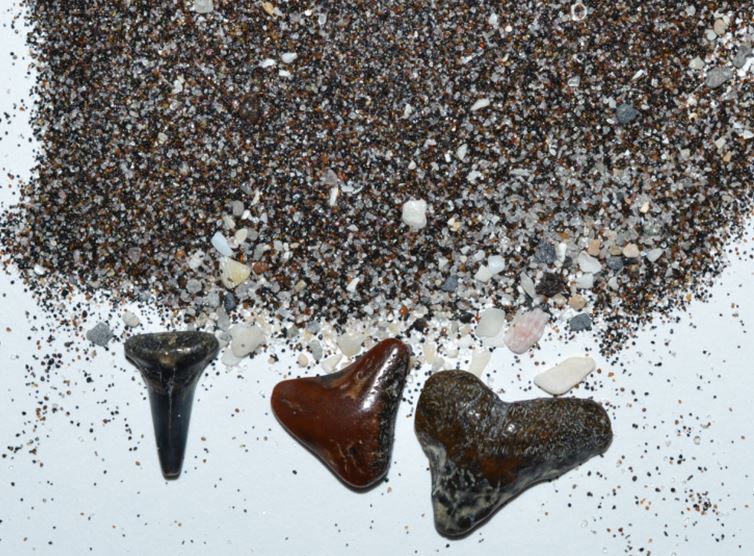 Shark teeth are also found in the phosphate-rich sand of Caspersen Beach. Brain Dear included three in the 20ml sample he sent to me. The tooth on the left is 1 cm tall.