It has now been almost a year since I started actively collecting and trading sand.  I collected somewhere near 100 different sands last summer and fall during mineral trips or on day outings around western New York.  And during the winter I have traded some of those for others.  I think my total count exceeded 750 earlier this month when trade packages arrived from Maryland and California.

With that backdrop, imagine my surprise last January when my wife dug out three peanut butter jars from the corner of the garage labeled “Monahans Sandhills, 1995”. They were full of tan quartz-dominated sand!  She had collected the quartz-rich sand when we had lived in Midland, Texas, some 50 miles to the east.  She had earmarked them for our three sons and pretty much forgotten them (the sands, not our sons!).

I’m pretty sure our three sons will not want sand from their childhood, but just in case they do, I re-packed some into three smaller jars before commandeering the remainder for my collection.  Of course, I sought permission from the original collector, who only asked that I continue to keep all my sand out of the kitchen, well except when I have to dry them in the oven!  This wonderful aeolian sand did not, however, require drying.   As would be expected from an aeolian deposit, the sand is quartz dominated and it is fine-grained; the cover photo of the grains is just 4mm across.   Grains are rounded and the sand is well sorted.

So, I ask, is this my first sand?  Technically, I did not collect it, Patty did.  But I was there and it has been in my possession, well, sort of, ever since.  That is a rhetorical question.  I do not need your answer.  I am considering it my first sand, predating all others in my collection by about two and a half decades.  Thank you, Patty. 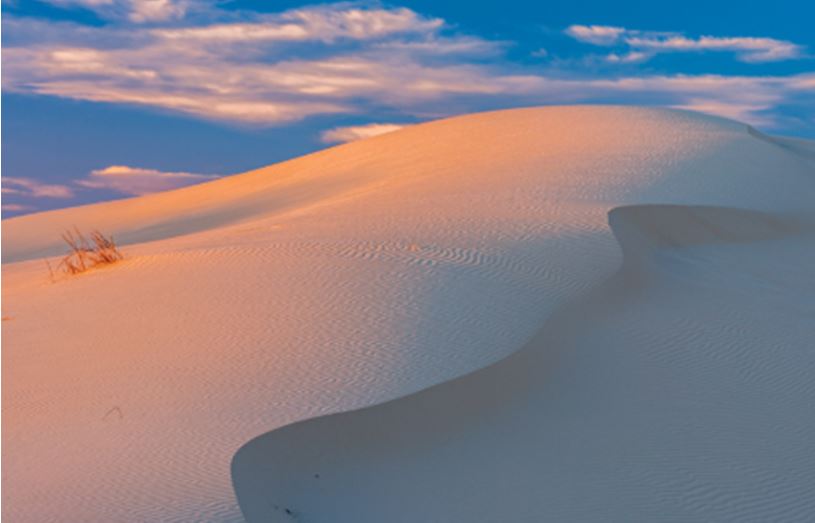 Monahans Sandhills: Not much grows on the dunes, a little grass here and there where the sand is shifting less. The dunes are particularly beautiful at sunrise and sunset.
Photo from a Texas Highways Travel site

Monahans Sandhills State Park is in Ward County, West Texas.  The large dune field first formed some 40,000 years ago as wind-blown sand eroded from the ancestral Rocky Mountains to the west and north accumulated.  The sand is blocked from migrating further east by the Llano Estacado escarpment, an elevated plateau region of west Texas.  It is believed the dunes were even larger 15,000 years ago, but some dunes in the 4000-acre state park still reach 70’ in height.  Although the dunes are no longer growing, the wind still blows in the Texas desert and the 70 mile long and 20 mile wide stretch of dunes continues to reshape itself. 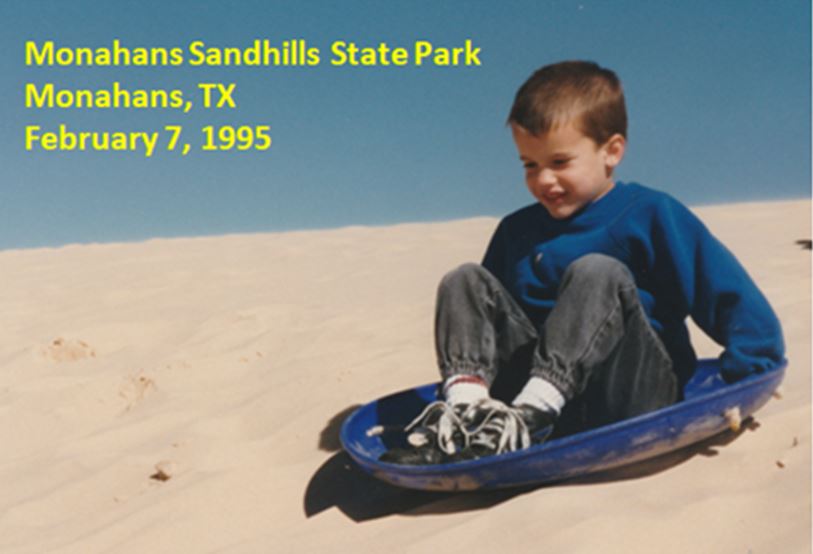 There is little snow in west Texas.  Instead, it is fashionable to wax the bottom of a coaster and slide down the dunes. This is our 5-year old son doing just that 25 years ago.