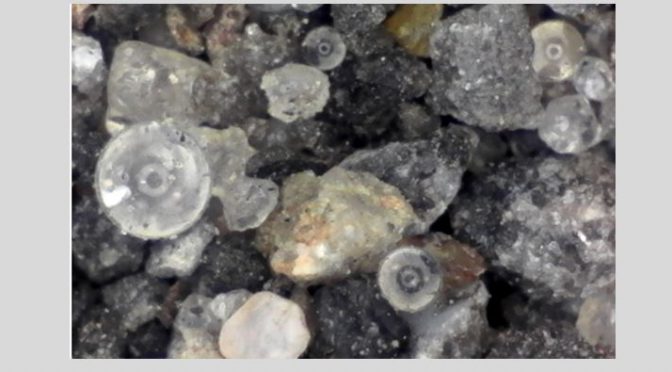 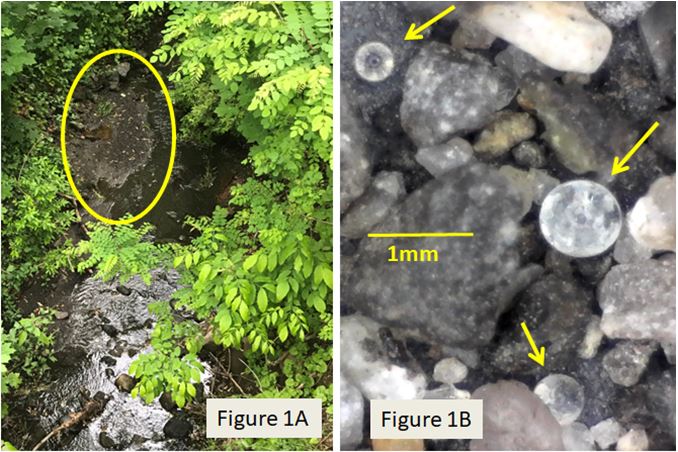 Figure 1A: A tributary to Allen Creek in Pittsford seemed to have developed a nice sand bar on its bank (circled in yellow). Figure 1B: But what were the strange concentric grains?

I immediately realized this was not glacially-derived sand nor was it the bits of Silurian dolostone or shale that underlie the glacial cover.  I was resigned to it being manmade, likely bits of macadam from the road.  But I washed it, dried it, and prepared it for viewing.  Why not, I’d collected it and I had the time.  I found it full of tiny little round, apparently transparent grains.  At first, I thought they were disks with hollow centers as my digital microscope did not have the depth of focus to observe their third dimension well.  I also thought they were likely plastic.  I was wrong on both counts.

One of the beauties of the internet is that experts can be sought for just about anything, including identifying strange grains in urban sand.  I posted my pictures to two Facebook Groups for sand collectors and let others speculate.  And speculate they did.  Maybe they are those dreaded microbeads that were used in toothpaste and cosmetics and since banned in most locations?  Others wondered if they could be carriers for slow-release fertilizer or insecticide used in the neighborhood.  I wondered if they might be an ingredient in roof shingles, but I canvassed my gutters and could find none amongst the weathered gutter aggregate accumulating there.

And then Leo Kenney, a sand collector from Massachusetts, chimed in with the answer.  They are reflective glass beads used in road signs and in the line painting on roads.  He further suggested that the dark center was likely an artifact of the lighting for my little digital microscope which basically floods the scene with very bright LED light.  A little research indicated that the beads used for highway paint are typically about 0.5mm in diameter.

I tried to isolate a few for a joint photograph, but once the tiny things were no longer lying next to other grains, they rolled everywhere.  OK, so they are not disks.  They are spherical and most are darn near perfect spheres.  I decided they looked better in place amongst other sand grains.

But, I was not done.  I returned to the scene and peeled off a small quarter-inch of painted tar from a crosswalk.  Shhh, don’t tell anyone.   Bingo.  It is a perfect match. 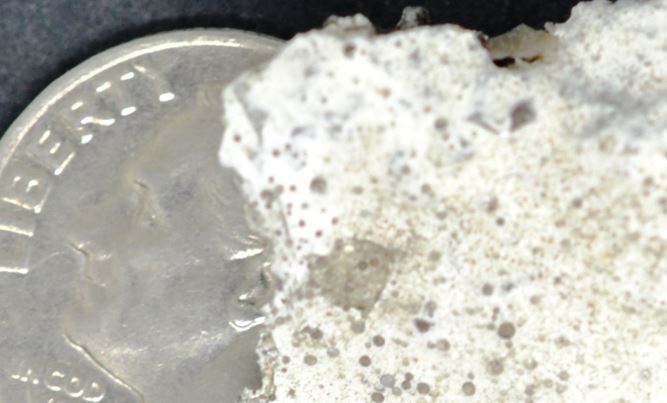 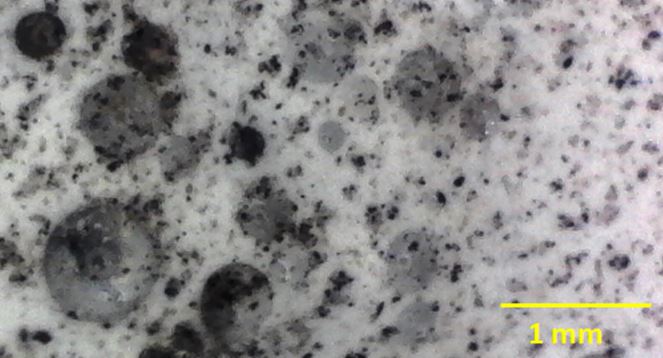 a close-up of the beads embedded in the white paint.

Back to the internet:  Based on their size and usage, these are Type 1 Reflective Paint Glass Beads.  The idea is to spread the paint so that the reflective beads are about 50% exposed above the paint level.  If the beads are too deeply buried, the paint will cover them and reduce reflectivity.  If they are too exposed they will weather out prematurely.  They make dispersive units designed to accomplish this.

It is recommended that you mix 5-6 pounds of these beads for each gallon of paint.  That is a heck of a lot of 0.5mm glass beads in each gallon.  I’ll let you calculate how many!

Just in case you wondered:  you can buy these beads online.  One site I found sells them in 50-pound bags.  Right now you can get a bag for a discounted price of $89.  Or even less expensive if you buy a full pallet (40 bags). 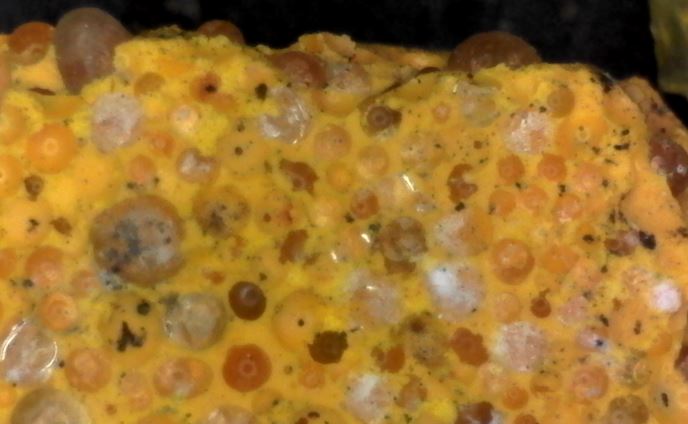 Yes, they are used with yellow paint as well.

Now I wonder how many such glass beads I have overlooked in other sands I have collected in proximity to marked roads or painted signs?  Yes, they are manmade.  However, they are inert and I presume they have no more adverse effect on the environment than grains of well-rounded quartz.