I should have known.  It was only a matter of time before I would return to my roots and become a sand collector again.  It goes back to December of 1976.  I was a senior at Lehigh University with one semester left before earning a B.S. in Geology.  I wanted to do a Senior Research project during my final semester.  Having just completed a course in Sedimentology, Professor Bobb Carson suggested I study the heavy minerals present in beach sand.  Perhaps I could compare the composition of heavy minerals present in the tidal zone with those high in the dunes.  Perhaps aeolian sands would have a different heavy mineral content than those in the tidal zone.  Why not, I thought.  It could be fun.

First, I needed a field area.  Lehigh University is in Bethlehem, Pennsylvania, and only about two hours from the southern New Jersey beaches.  So, one fine January morning I put gas in my ancient blue Ford Falcon and headed east.  When I arrived at the beach the temperature was in the teens and the wind off the ocean was strong.  It was not beach weather.  It really wasn’t weather for field geology either.  But I was there and had a job to do.    I had no problem finding a parking spot.  The huge parking lot was completely empty.  I got the best spot!

I had carried several sizes of sampling spoons with me and some baggies and I set out with my backpack to do my field work.  I was able to sample the shoreline and the swash zone with my spoons.  I did not even have to remove my gloves.  I don’t even think I got wet.  There were even streaks of heavy minerals across parts of the exposed beach.  I was cold, but I was doing great.  This was going to be some project.

Then I climbed into the dunes to seek out streaks of dark minerals that might represent sand that had been transported to their current location by wind.  I encountered my first problem.  There did not seem to be any heavy mineral layers.  I was beginning to feel the elements while I searched.  The car, some 400’ away, beckoned.  Finally, I found a dune face that had dark streaks and I took out my spoons.  The darn dune face was frozen solid!   My spoons were no match for the ice that was holding the sand grains together.  Was I doomed?  Whose idea was this?

Fortunately, I was a geologist and I had a rock hammer.  Unfortunately, I had left it in the car.  One cold walk to the car and back and I was able to sample the frozen dunes using a rock hammer and a screwdriver that for some reason was in the glove compartment.  I was still an undergraduate student; chisels were not yet part of the toolbox.  An hour later, I was back in the car with several dune samples.  The heater worked and I was good to go.

I started my trek back to civilization.  No more than 5 miles down the road as I drove across the pine barren flats of southern New Jersey, a policeman decided to pull me over.  I couldn’t imagine why.  Apparently he couldn’t either.  He must have wondered why a beat-up Ford Falcon with Massachusetts plates was driving a deserted county road in New Jersey on one of the coldest days of the winter.

I told him I had been collecting sand on the beach.  You know, for a project I would do back at college. I don’t think he believed me.  He asked for my college ID and he asked to see the sand.  I showed him both and he looked at me for a minute.  I still don’t know if he believed me.  But, he was probably getting cold too, so he instructed me to drive carefully and let me go.  I wonder what he told his colleagues back at the station.

Back at Lehigh, it was time to separate the heavy minerals from the quartz and feldspar.  We used two or three different dense liquids to do this.  Stuff like carbon tetrabromide and other really nasty carcinogenic compounds.  Yes, this was done under a hood in a controlled chemistry lab, but I am certain I was not fully aware of the possible dangers.  Fortunately, the separation process for my handful of samples took less than a week or two.  Since I am around today, I guess I did not inhale while I worked.

A sophisticated device called a point counter was used to tally the grains from each sample. I think I counted 1000 grains in each sample: well maybe it was only 500! I needed two of these to cover the diverse set of minerals present in the New Jersey beach sand.

For the next couple of months, I counted sand grains.  I learned to distinguish hornblende from augite, and epidote from olivine.  I learned to use birefringence as a grain identifier and how refractive index can help with minerals like zircon and sphene (now titanite).  In addition to identifying minerals, I also recorded their shape, estimating roundness and measuring their aspect ratios (length to width ratio).

I remember the collecting day vividly and the work process rather well, but I’ll be darned if I remember the results.  I wish I had kept a copy of my final report.  I did achieve my primary objective: I earned the six credits for a senior project.  But I cannot recall much about the technical learnings.  I built and then drafted (no personal computer in 1977) histograms, but I cannot remember what I was plotting or which columns were highest.

I do remember two conclusions.  First, there were more elongate (hornblende) and flat (biotite) grains in the dunes than on the beach as a percentage of total heavy mineral content.  I reasoned that their dimensions may have helped them migrate to the dunes.  Second, the denser minerals (magnetite and to a lesser degree garnet) were more common in the tidal zone than in the dunes: again, as a percentage of the heavy mineral content.  But it has been many moons (43 years of them) since those formative years and if there was anything more profound about my study it has escaped, lost along with the report.

One thing, however, is clear to me.  I must return to the scene of my first independent geology study and sample that sand again.  There is just one problem.  I cannot recall which beach it was.  Scanning Google Maps, I think it might have been Ocean City, perhaps Corson’s Inlet State Park towards the southern end of that barrier island.  Perhaps it does not matter as those barrier islands have been repeatedly traumatized by hurricanes and winter storms during the past four decades.  My dune and beach might have migrated or even be gone.   Hmm, maybe the police might have a record of the stop they made on the coldest day of January 1977. 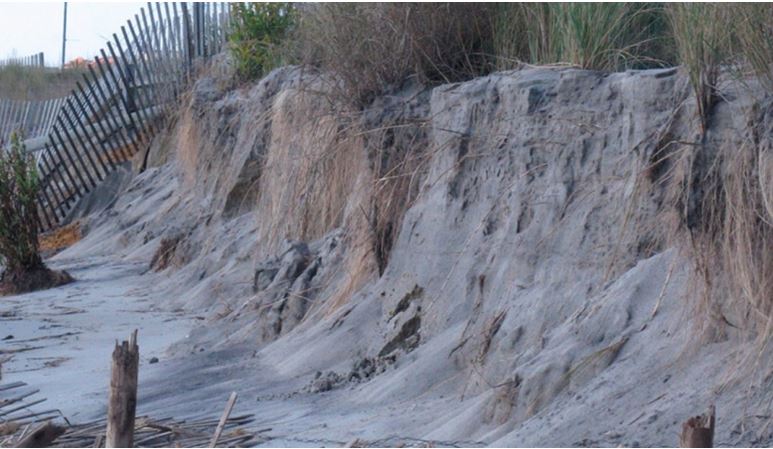 Tropical storm Melissa ravaged the dune environment along the New Jersey shoreline just this past year. These 5’ high cliffs were cut into the dunes in Ventnor, just south of Atlantic City. Can you see the heavy mineral accumulation at the base, just to the right of the broken fence post. (weather.com, Oct. 15, 2019)