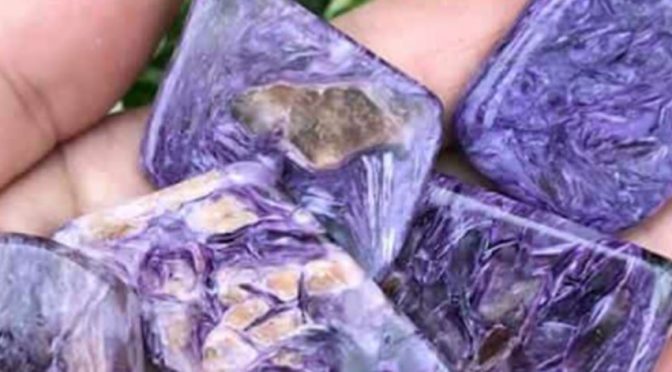 Who likes purple minerals? It seems just about everyone likes purple minerals and there will be a few choice ones at the Wayne Country Gem and Mineral Club auction on February 14th.   Yes, the auction this year is on Valentine’s Day.  Someone is going to go home with a brilliant amethyst piece, but you will have to come to the auction to see how purple it is and whether it is from Brazil or Uruguay.  There might also be lepidolite or bismuth or fluorite or other purple goodies.

But this note is going to focus on another purple favorite.  Almost every month someone arrives at the workshop with a small slice of purple charoite.  The color captures the eye first, but the mesmerizing swirling pattern of the bands of charoite is irresistible if not a bit hypnotic. 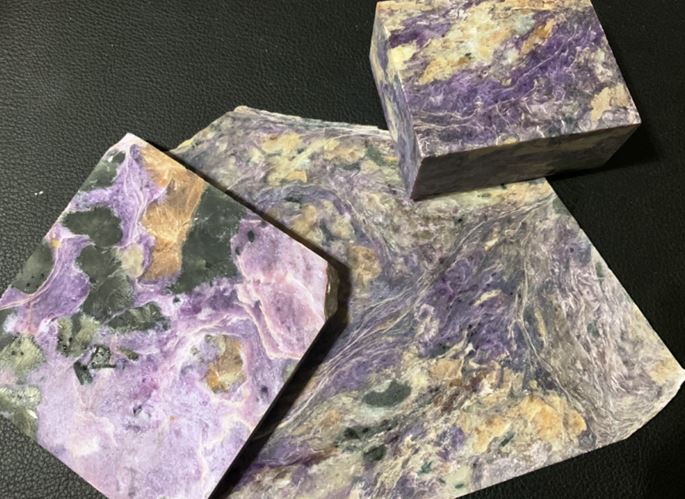 WCGMC has these three cut, but unpolished charoite pieces in its collection. One of them will be auctioned to a lucky new owner on Valentine’s Day. Will it be you?

Charoite (pronounced ‘char-oh-ite’) is a rare monoclinic calc-silicate mineral that formed during contact metamorphism when syenitic magmas intruded limestone.  Silica and potassium from the magma mix with calcium from the limestone to form the fibrous purple mineral.  Given the common occurrence of syenite composition magmas and limestone it is rather surprising that this mineral is actually not more common.  But it is not.  It was discovered in 1940, but not described and identified until 1978 and it is still only found in one location in central Russia.

With a hardness of 5-6, charoite polishes more easily than quartz or agate, but is still hard enough to endure the stress of lapidary work.  It can be weakly fluorescent (another thing to check!) and you will want to look carefully for some other rare minerals with which it is often associated (green aegerine and orange tinaksite are two such minerals).  The purple prismatic crystals are often very small and fibrous and it is this property that generates the wondrous signature character to the stone. 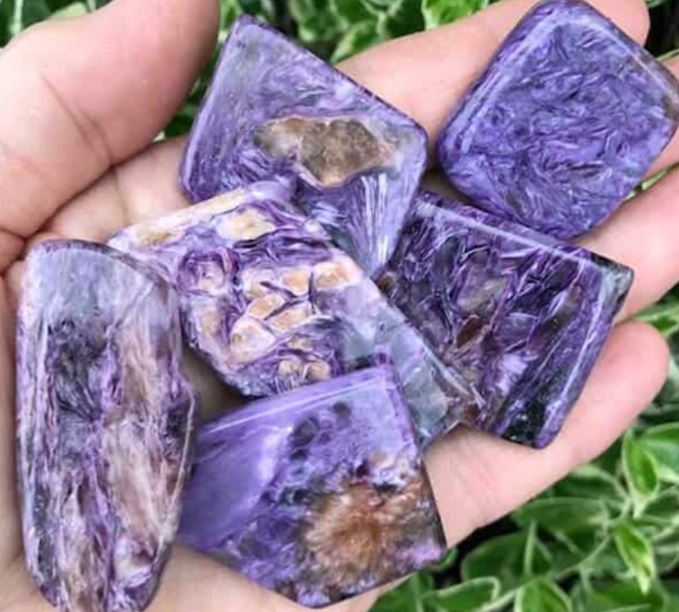 Once chariote is polished it is absolutely stunning. (from Geologypage.com, 2020)

Recognizing its uniqueness, Russia even featured charoite on a postage stamp in 2000. The specimen on the stamp does not do justice to the mineral, but the stamp is certainly colorful.