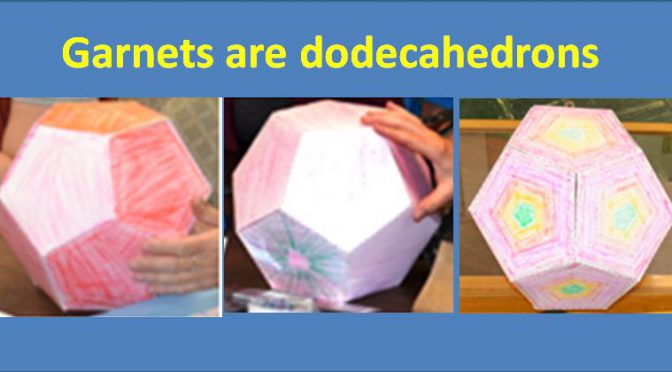 We do a lot of different things at WCGMC meetings and on workshop Saturdays.  I don’t often document these activities to my blog as I don’t think they would generally interest folks outside the club.  But at the June meeting this year we did something a little different and I decided my newsletter note for the July newsletter served to be placed here.   You see we made garnets …. well, sort of.

Garnets are isometric.  The crystal structure for all 14 recognized garnet minerals is built on three equal and perpendicular axes.  But unlike pyrite, the most common isometric form of garnets is not a simple cube, but rather a more complicated and interesting polyhedron called a regular or pentagonal dodecahedron.

Dodecahedrons are polyhedrons (solid forms with multiple planar faces) with twelve flat surfaces.  There are several variations, but in a regular dodecahedron those surfaces are all five-sided pentagons.  In addition to the 12 pentagonal faces, regular dodecahedrons have 30 edges, 20 vertices, and 160 diagonals.  And you thought isometric minerals were simple!

Mineral collectors today have a different perspective on crystal forms and most immediately associate the dodecahedron with garnet  There are variations in the crystal form of garnets and not all garnets are pentagonal dodecahedrons (Minerals.net), but that did not stop WCGMC from “making” perfect (and large) garnets at its June meeting.

Rather than using Mg, Fe, Al, Si and other elements nature uses to build spectacular colorful garnets in a multitude of geologic environments, we used cardboard, crayons, scissors, two-sided tape supported with a healthy dose of imagination.  Some of the creations were true works of art.  Everyone had fun and went home with a new appreciation for the complexity of Euclidian geometry.  Well, maybe that is stretching things some.

I could go on about the wonderful simplicity, yet surprising conplexity of isometric mineral forms, but I think a few pictures from our June activity will probably be more appreciated.  For more on garnets, check out the January, 2016 WCGMC newsletter. 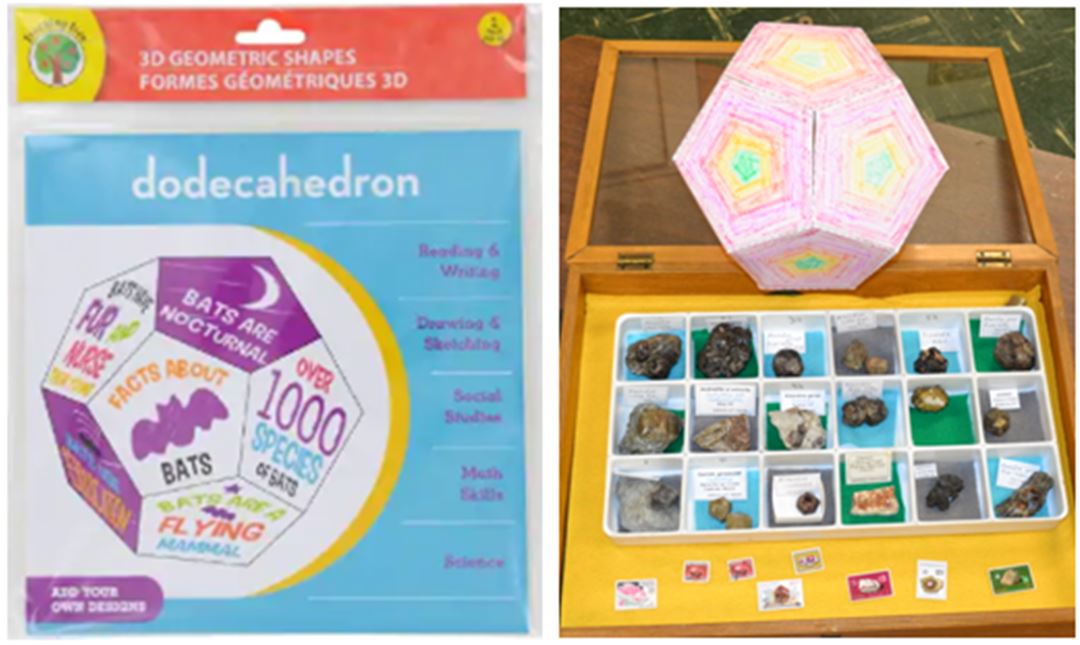 Dodecaheron kits: It started with simple kits purchased from Dollar Tree stores in the area. I cheated and made my “garnet” ahead of the meeting and also brought some real garnets and stamps with garnets. I know garnets are not color-zoned on their faces. I declare artistic license. 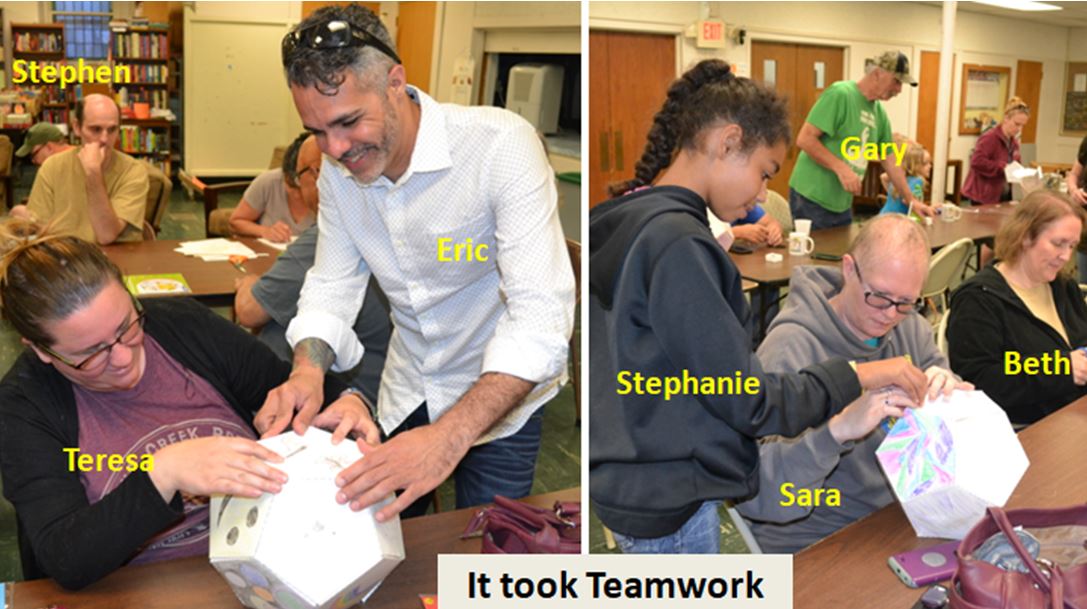 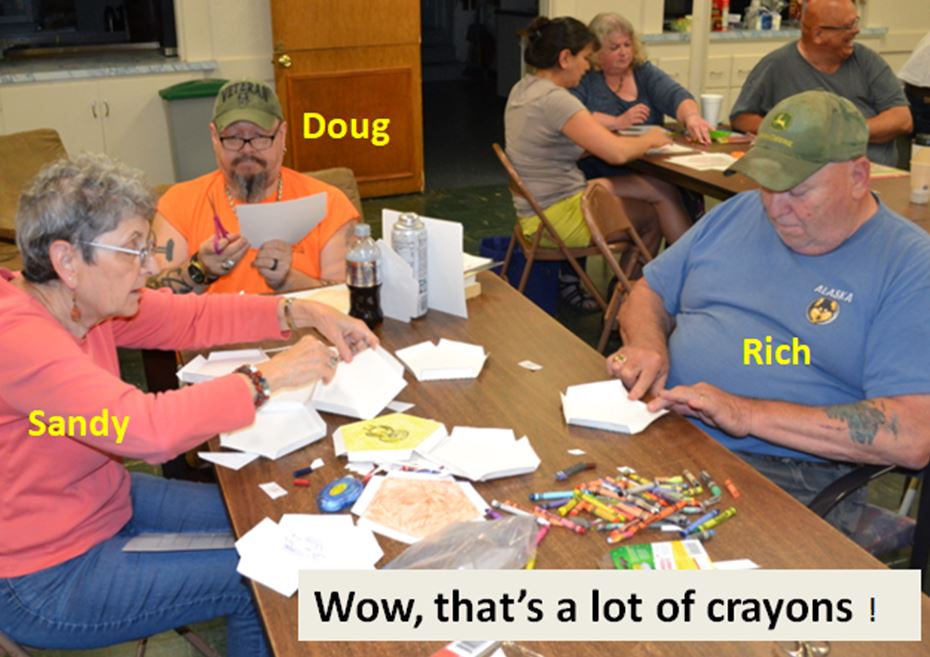 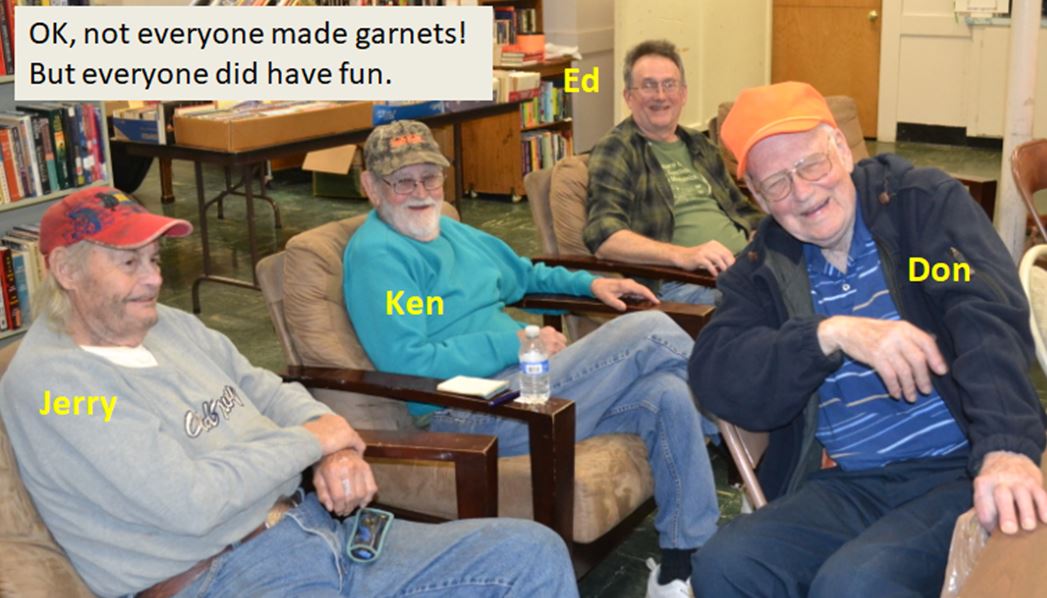