Yes, this is a bit of a repeat article.  But I changed it a bit for publication in a stamp newsletter rather than a mineral newsletter and have decided to post again.  It is my blog, so I can do that !!  You, however, do not need to read it again, or at all.

Contrary to what you may have thought in high school, the Periodic Table of the Elements was not created to torture high school chemistry students.  The idea was simple at first.  Aristotle considered a four element table way back in 330 BCE.  He identified earth, air, fire and water as the four elemental building blocks.  But others since have not been satisfied with his simple approach.  The concept changed and the list grew and with that came complexity.

By the 1700’s some 30 elements had been isolated and described and that grew to over 60 by the middle of the 19th century.  And it was in the middle of the 19th century that several chemists and inventors working independently began to recognize patterns in those elements and began to organize them into lists and tables.  A Russian chemist named Dmitri Mendeleev had the foresight to recognize that the known elements should be organized on their atomic weight and he also set the elements into a two-dimensional grid-based on common properties.  But it was his observations that the chart needed gaps for elements that had yet to be discovered that set him apart from others.  For this insight, Mendeleev is credited as the “father of the Periodic Table”. 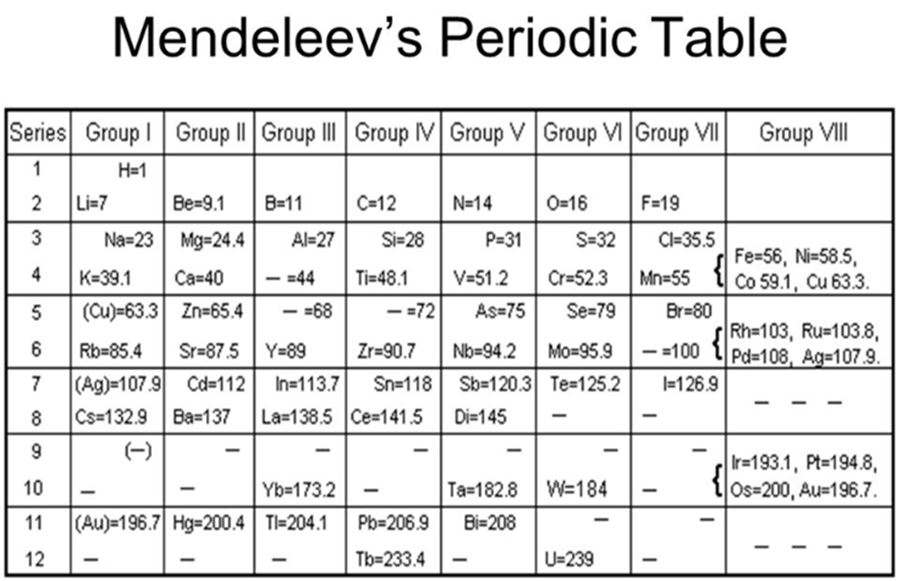 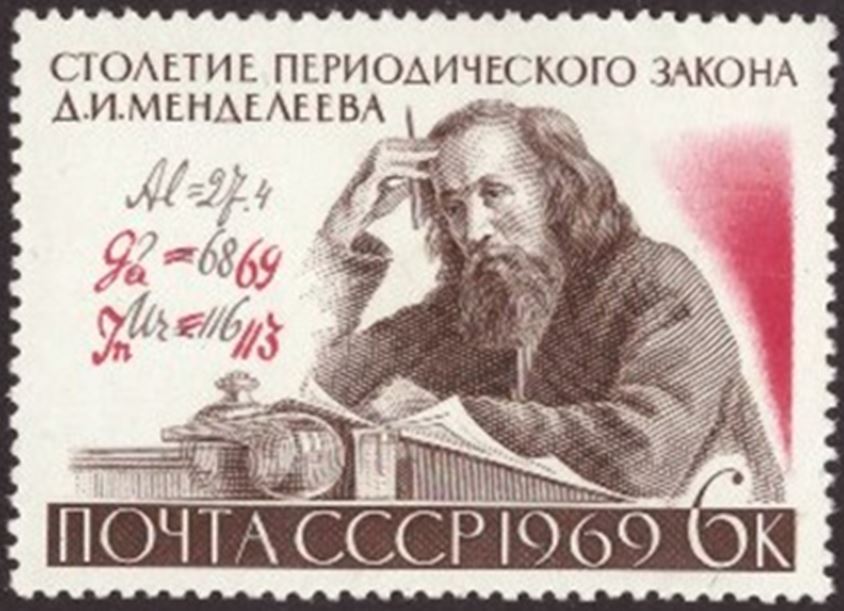 In 1969, Russia marked the 100th anniversary of Mendeleev’s Periodic Table with a postage stamp depicting him in deep thought over the missing elements. They highlighted two of these elements in red, gallium which had yet to be discovered, and indium, which was known, but did not yet have a known atomic mass. 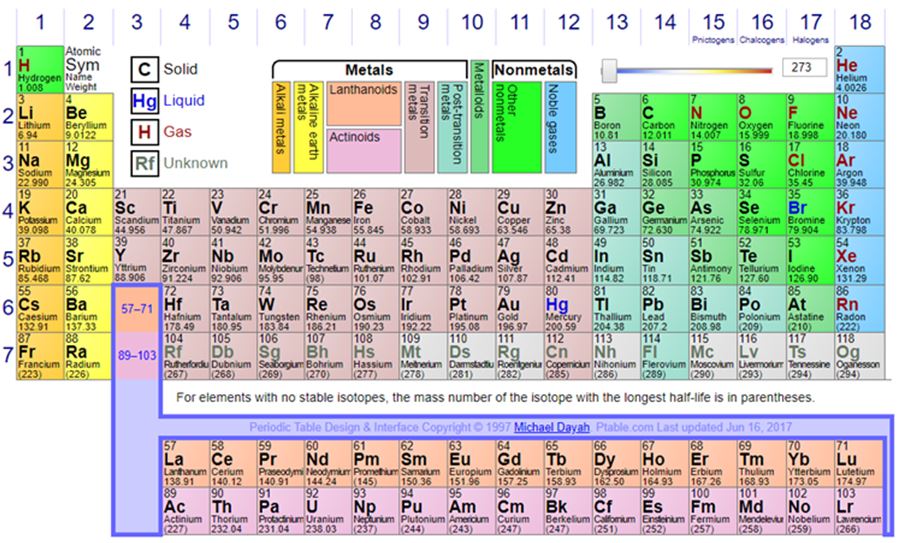 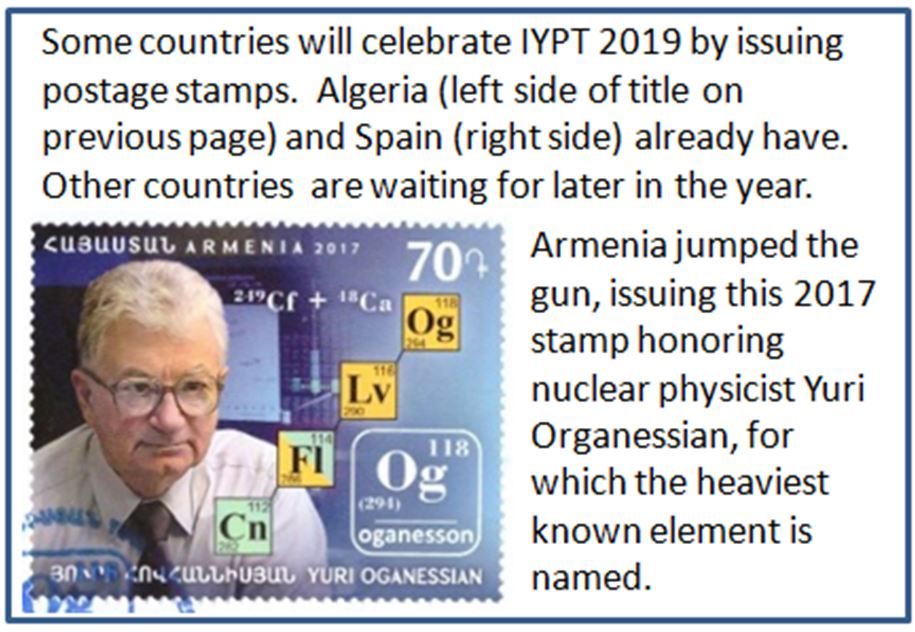 Perhaps your topical collecting juices will be stimulated by the idea of collecting stamps that commemorate the Periodic Table or the scientists that contributed to its development.  For starters, Dmitri Mendeleev has been featured by multiple countries and on multiple occasions. 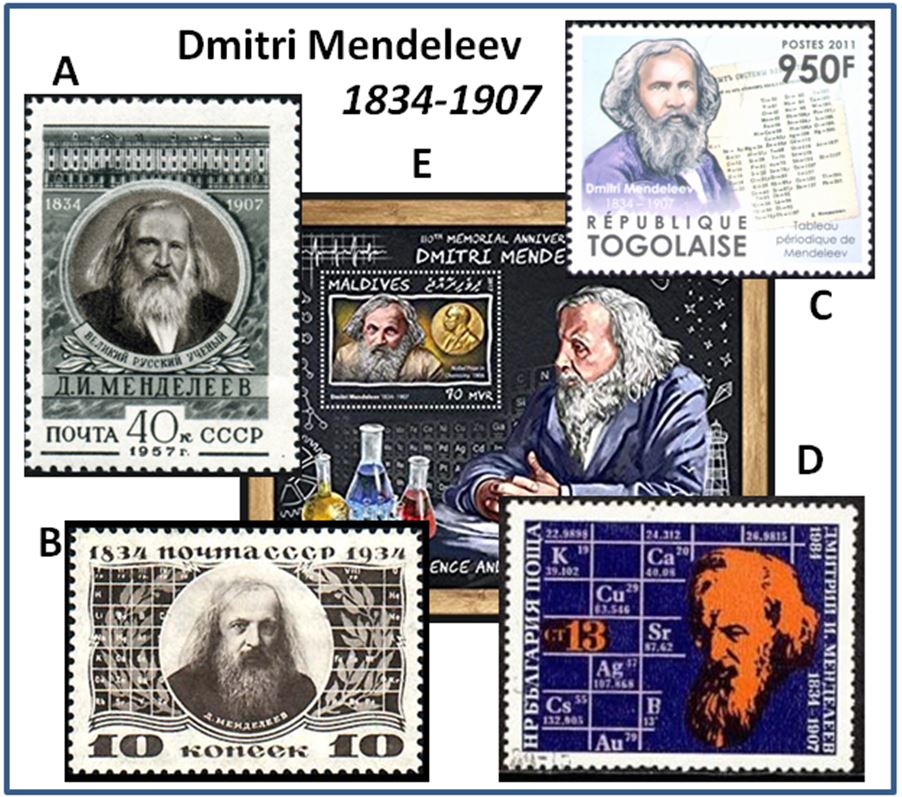 I thought my favorite stamp with Mendeleev was the 1969 Russian stamp with him pondering the missing elements.  But in April of this year, Kyrgystan issued this souvenir sheet this year to honor his role in the Periodic Table.  Now I am not certain.  This is pretty nice also. 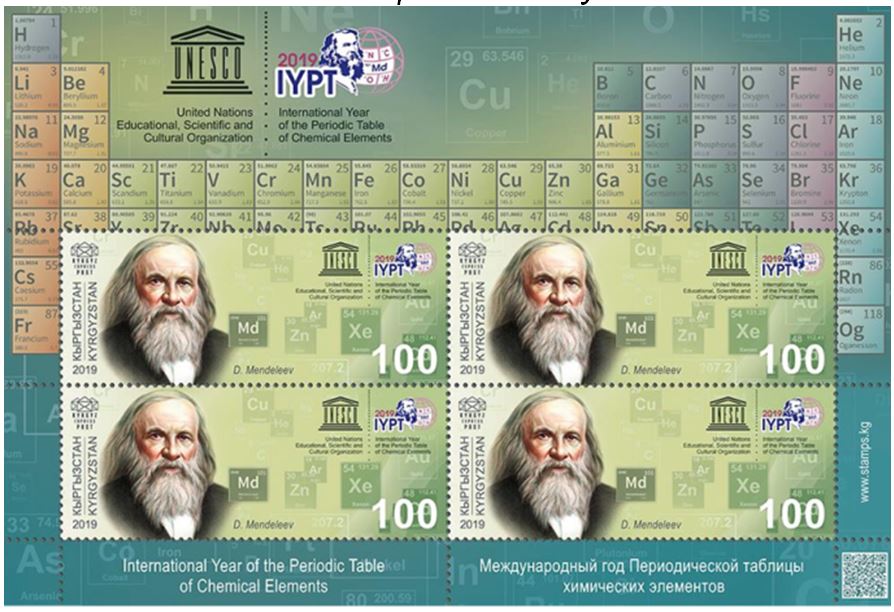 Of course, there have been others making significant contributions to the Periodic Table and the elements they have discovered or described.  Madame Curie studied the radioactive elements that ultimately killed her in 1834, ironically 100 years after Mendeleev’s birth year.  You could make an entire exhibit from her stamps and philatelic material, but I will settle for another collage. 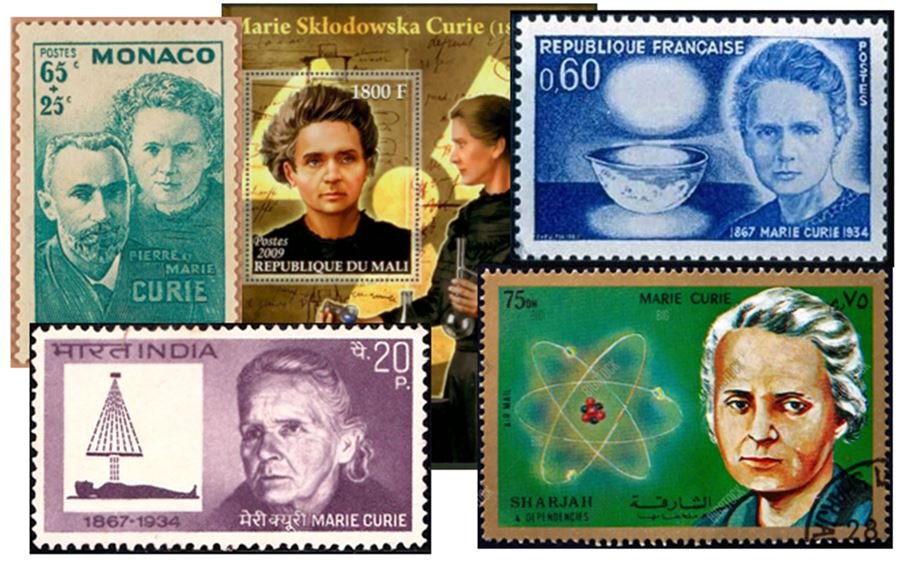 Do you know any of these famous scientists and their roles in the development of the Periodic Table?

Left: Johan Gadolin discovered yttrium. Gadolinium is named after him. Center: Jons Jacob Berzelius is credited with developing the one and two-letter symbols for the elements as well as discovering silicon, selenium, thorium, and cerium. Right: Hungarian Franz-Joseph Müller von Reichenstein discovered tellurium in 1782.