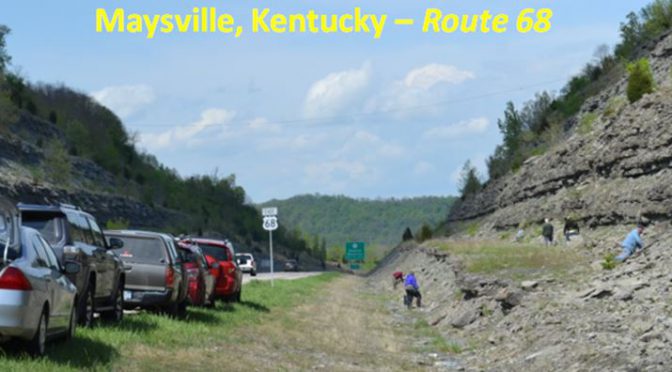 Several WCGMC fossil enthusiasts joined the Buffalo Geological Society’s annual fossil trip to the Cincinnati area in late April.   We thank Jerry Bastedo for organizing yet another fine outing into the Ordovician rocks surrounding the Cincinnati Arch.  All told we visited 11 roadcuts in three states during our 4 days in the area.  And we found fossils at all of them!  Down there they say that if there is rock exposed in a roadcut there will be fossils.  From my experiences to date, I firmly believe this statement.

We collected hundreds, perhaps thousands, of the common Ordovician brachiopods and horn corals that seem to be ubiquitous and I added to my collection of Solenapora from the site in Flemingsburg, Kentucky (see April 2019 newsletter), but I’d like to focus on two locations and special finds that folks made at other Kentucky sites.

By far the highlight fossils found on this trip were a number of isorophid edrioasteroids found at a roadcut outside Maysville, Kentucky.  Edrioasteroids are the official city fossil of Cincinnati.  But they are not as easy to find as many of the other fossils in the region.  They are echinoderms (spiny-skinned animals with 5-fold symmetry) that attach themselves to hard substrates like other fossils or hardgrounds. 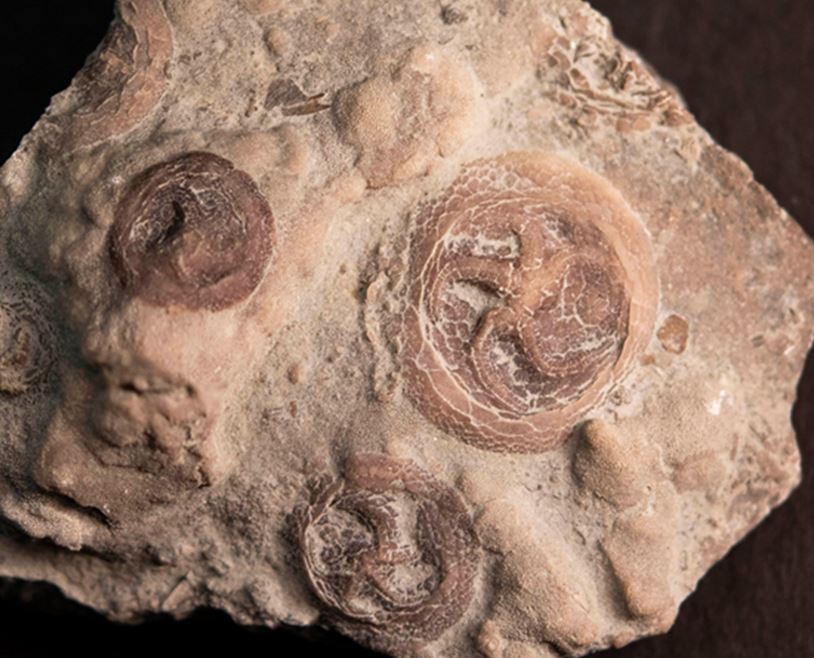 WCGMC member Peter Kisselburg found this nice plate with three edrioasteroids. Noting the curved arms (ambulacra) extending from the centrally located mouth, we believe these are Isorophus cincinnatiensis.  The largest one is about one-half inch in diameter.    Photo by P. Kisselburgh

Perhaps my favorite find of the trip was several Archimedes sp. bryozoan, so named for the screw shaped appearance of their axial columns.  We ventured into the Mississippian south of Louisville, to sites in Wax and Leitchfield, Kentucky to find these unique animals.  We also collected Pentremites sp. at both these Mississippian sites.  Pentremites are small nut-shaped blastoids.  Like edrioasteroids and crinoids, these carry the unique 5-fold symmetry of all echinoderms.  Pentremites and Archimedes have special meaning to me in that both are on the list of fossils in the secondary school Science Olympiad program.  Now I have many more specimens to share with those students next year. 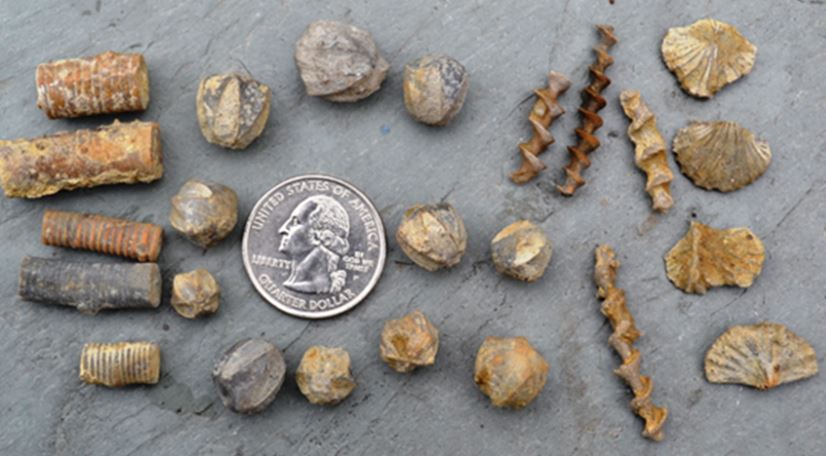 A few of my Mississippian finds from Wax, Kentucky.  Crinoids on the left, blastoids surrounding the quarter, the unique Archimedes bryozoa and some small, but complete, brachiopods on the right.

If we happen to meet, ask me about Horn Coral Heaven in Ohio,  about an hour north of Cincinnati.  We collect Devonian Heliophyllum halli by the bucket load.  In the Late Ordovician Whitewater Formation around Cincinnati they collect Gregwinkia canadensis just as easily.  I have not cleaned mine yet from this trip, but once I do, I imagine I will let you see some in a future blog post.