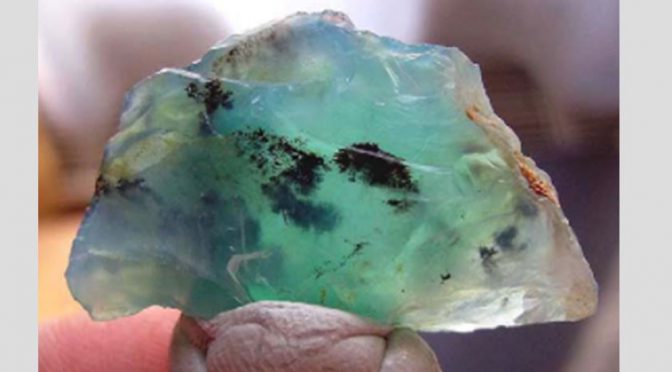 Wayne County Gem and Mineral Club throws a marvelous Christmas party each year and 2017 was no exception.  When it came time for me to select my club gift from the table of bright red boxes at the holiday party I did not hesitate.  I took one from the middle of the back row and went back to my table to see what I had been gifted.  I was not disappointed.  I opened my bright red box and pulled out a colorful blue layered rock.  The label simply said “Peruvian opal”.  I was pleased for two reasons:  first I did not have any opal from Peru, but more importantly I knew nothing about it.  I would have fun back home while the snow fell outside researching my new “acquisition”.  A third bonus: as a rough piece, it will also give me something to cut and polish at an upcoming workshop. 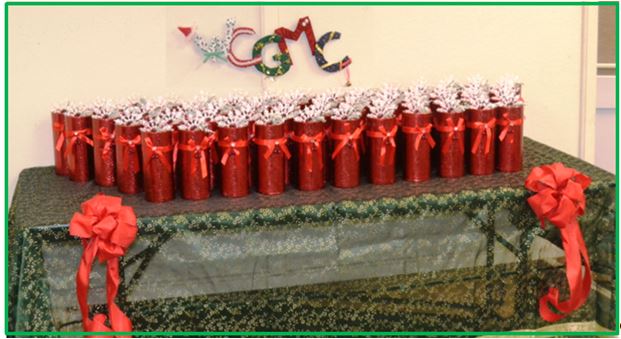 There was a smartly wrapped gift for each of the 59 folks who attended the year end party. I picked mine out with care.

It did not take long once home to learn a bit about the material.  I did what I always do for an initial search.  I googled “Pervian opal mindat”.  If you have not tried that technique I encourage you to do so; mindat is an excellent mineral  location website.  As usual it worked perfectly.  I had multiple pictures of the exact material (see photo to the left in the header above the article) and I had a mine and mining district site (Acari Mine, Caravelli Province).  I also was informed that the opal is colored by microscopic inclusions of chrysocolla, not by opalescence.  That was a good start, but I wanted to know more. 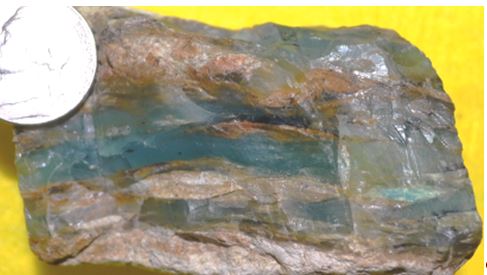 Peruvian agate – My Christmas gift from WCGMC. Blue opal is the national stone of Peru. It has held sacred status since pre-Hispanic time and has been used in jewelry, clothing adornments and decorative items in homes and on vessels for centuries (Caucia, et. al. 2014)

The Acari Mine is located 400 km (250 miles) south of the capital city of Lima in the western foothills of the Andean Mountains.  Historically, both iron and copper have been produced there from Cretaceous age intrusive rocks and surrounding volcanics.  More recently, in 1986, the district became the focus of a small gold rush, and production of the precious metal continues to this day.  Unfortunately the district made headlines earlier this year when miners were trapped in a landslide in the district and there were fatalities (Reuters, Jan. 18, 2017).

There is also pink opal found in the district.  The pink color is attributed to the mineral palygorskite which is intergrown with the opal.  Palygorskite is a magnesium-rich sheet silicate. To add to their appeal, both colors of “Andean opal” fluoresce green under short wave UV (Mindat).  I have yet to test my piece for this property.

In addition to opal, the district is known for a vibrantly hued chrysocolla that is often coated by quartz and/or chalcedony. (from minfind.com)