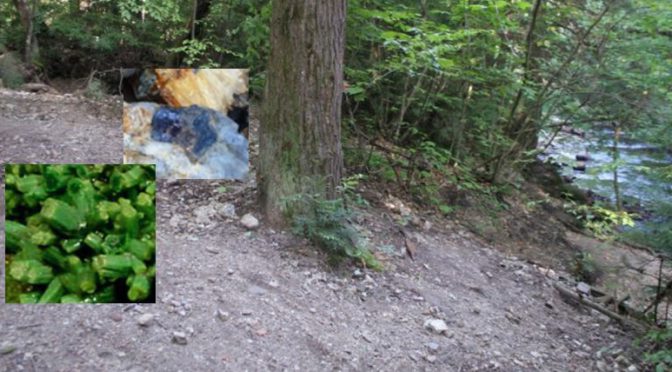 About 100 years later, at the end of the 18th century, the Manhan River mine site was reopened.  This time much of the work was done under the leadership of Vermont patriot Ethan Allen of Fort Ticonderoga fame.  The lead produced was used to cast bullets for George Washington’s Continental Army.  Yale chemistry professor Benjamin Silliman, for whom the mineral sillimanite is named, studied the property in 1810 describing the six to eight foot wide vein as “magnificent”, both for its ore potential and for the “perfect and beautiful” crystals that could be found “among the rubbish of the dump” (Green and Marshall, 2015). 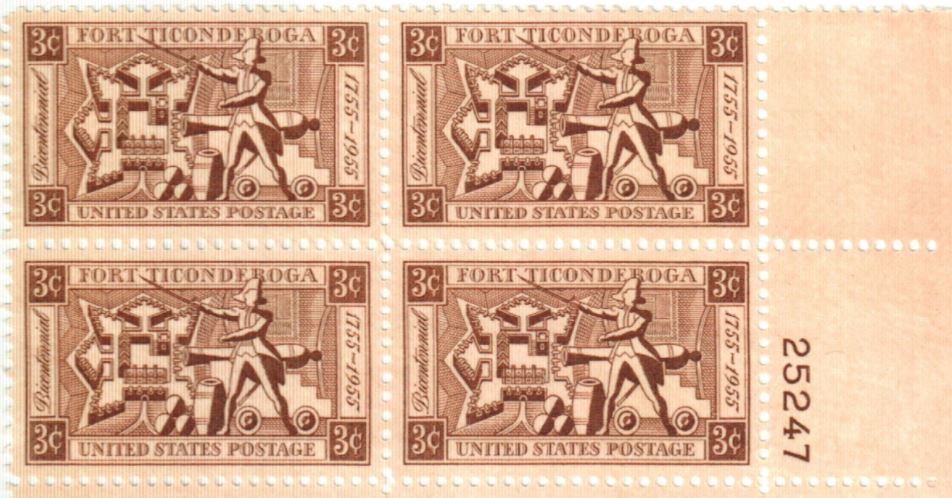 The Manhan Mine was never immortalized by a United States stamp, but Ethan Allen and Fort Ticonderoga were, back in 1955 when it cost 3 cents to mail a letter!

The mine was periodically worked for both lead and a small amount of silver during the first half of the 19th century, but the mine never reached the potential that was assigned to it by many who visited at that time.  The last mining was in 1865, when the Manhan Silver Lead Mining Company filed for bankruptcy.

Linda Schmidtgall and I visited the site on our reconnaissance of western Massachusetts locations in September.  We spent time digging and collecting on both sides of the river, which, at that time, could be crossed on rocks without getting wet (my method) or by wading through ankle to knee deep water (Linda’s method).  The site is easy to find after a short walk downhill to the banks of the river. 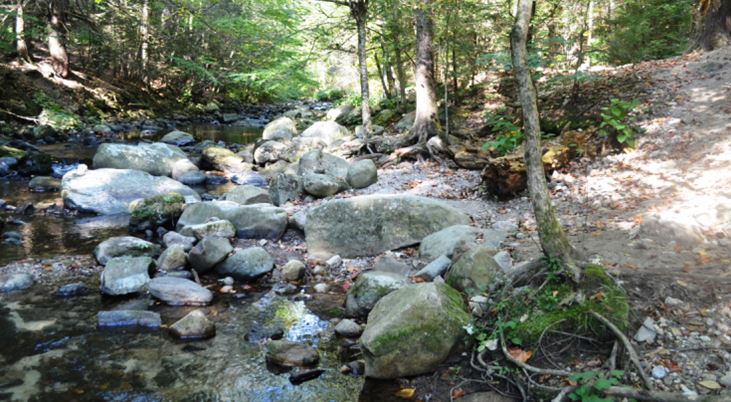 The Manhan River in Loudville, MA. Dump material is on both sides. You can see a bit of it on the right side of this picture in the sunlit area.

So how did we do?  Well, the site is heavily collected and digging is required to find much of anything.  But we did find significant galena with its brilliant metallic luster and distinctive cubic cleavage.  Pieces were smallish and hosted mostly by massive quartz.   They will make for nice teaching pieces and I will cherish my best pieces as representative of 17th century ore from my home state of Massachusetts.  I actually grew up less than 20 miles from the Manhan Mine, although I was blissfully oblivious of its existence, much less its resource significance. 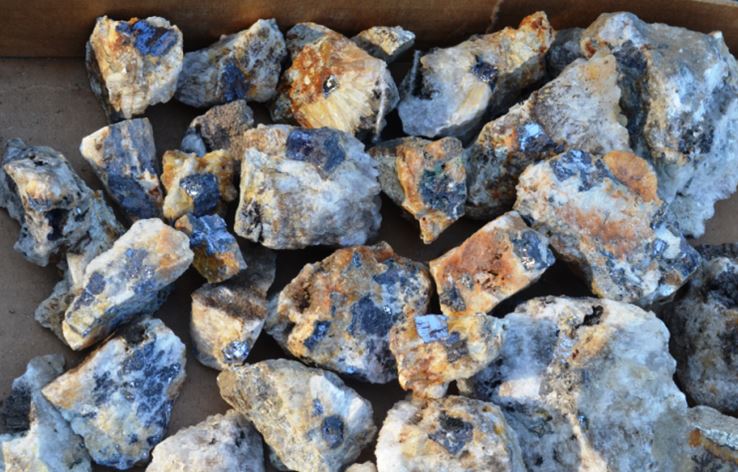 Galena (PbS) in quartz from the Manhan Mine dumps.

In addition to the galena we did encounter and collect several quartz points on matrix and numerous other quartz pieces that probably will be grab bag additions come next June at GemFest.  I found one piece with small pyromorphite crystals (1-2mm set in a small vug) and Linda noticed several equally small panes of wulfenite in a dirt-filled vug once she got home and started to clean.  She wonders how many she broke during cleaning before noticing the tiny yellow wulfenites clinging to the base of the hole.  The hole appeared cubic and might have been the site of a galena crystal before it was oxidized. 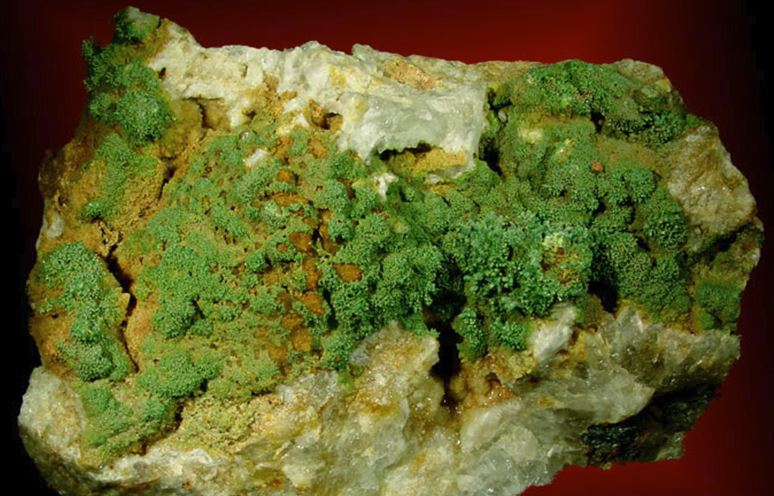 We did not find a prize to rival this one discovered in 1999, 6” across and covered with wonderful pyromorphite crystals. (photo from Green and Marshall, 2015)

Pyromorphite is a secondary lead phosphate mineral (Pb5(PO4)3Cl). that forms in the oxidation zone of lead deposits along with its “cousins” vanadinite (Pb5(VO4)3Cl) and mimetite (Pb5(AsO4)3Cl).   The barrel-shaped or spindly crystals are hexagonal and often form interesting aggregates or clusters.  Typically green or yellow green, the individual crystals are often etched or hoppered.  Interestingly, pyromorphite was not described until 1748, well after it was dug at Loudville and it was not an accepted named mineral until 1813. 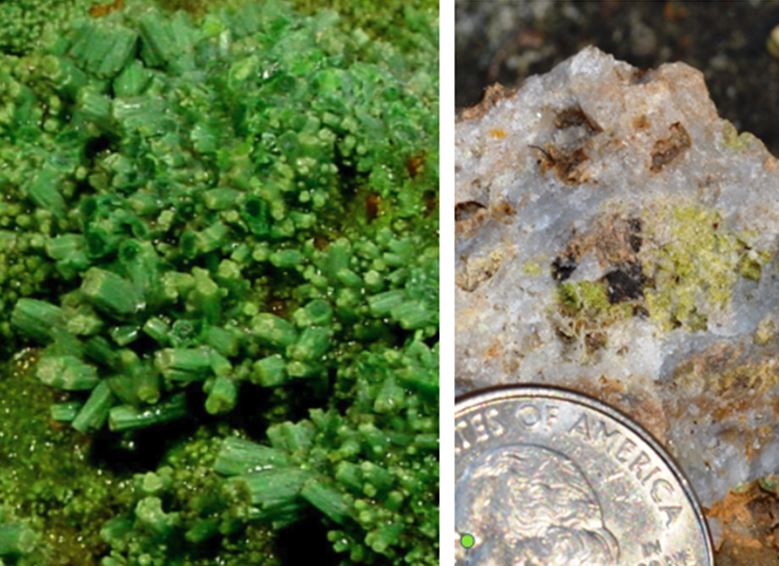 Manhan pyromorphite: A cluster of 2.5mm pyromorphite from the Green and Marshall 1999 find on the left. A few tiny pale green pyromorphite in a vug from my 2017 find. My piece does have more quartz than their piece. Just saying!

I think we would have had to dig deeper and probably stayed longer to find any collectable secondary minerals.  Luck might have played a role also.  If you wish an interesting read, check out the story on the 1999 discovery (Green and Marshall, 2015 from the link below).