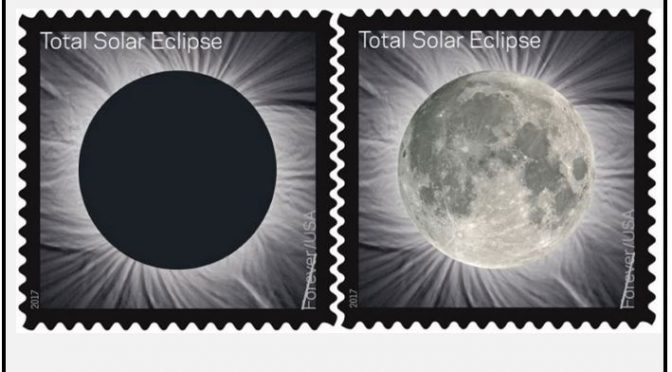 On August 21, the sun will disappear for more than 2 minutes across a wide swath of the nation and the USPS is not missing out on the action.  A month prior to the eclipse and aligned with the summer solstice, a single Forever stamp will be issued to commemorate the event.  The first day of issue will be in Laramie, Wyoming on June 20th. 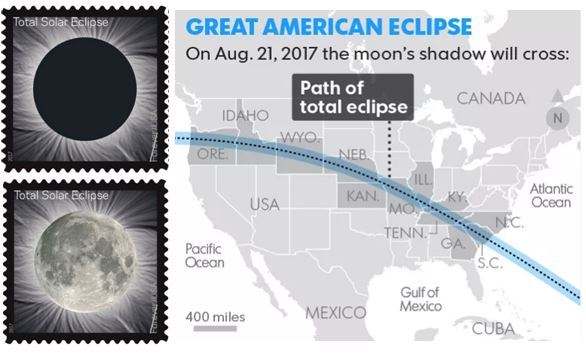 One stamp or two stamps?   Just one, but printed with a special thermochromatic ink.  When cool, the stamp will depict the total eclipse and the moon will be black.  When warm, as from the touch of the thumb, the stamp will show the full image of the moon, which will fade back to the eclipse form when it cools back down.

The USPS claims that the ink’s capacity to effectively store the hidden image will fade if exposed to direct sunlight (interesting aspect for an eclipse stamp).  They plan to sell collectors a special envelope and stamp pane to help protect the stamp.

It will take less than 2 hours for the eclipse to move coast to coast, starting in Oregon at 10:00 AM PDT and exiting in South Carolina at 2:45 PM EDT.  Barring weather, folks in 14 states will get to observe the effects of a total solar eclipse.  It is recommended that those who wish to insure themselves a view travel west, to central-eastern Oregon, Idaho, or perhaps Wyoming.  Skies are generally clear there in August.

For those of us in Rochester we can expect about 75% eclipse coverage on August 21, but do not fret.  The next solar eclipse for North America will come directly over our heads.  We only have to wait until April 8, 2024!