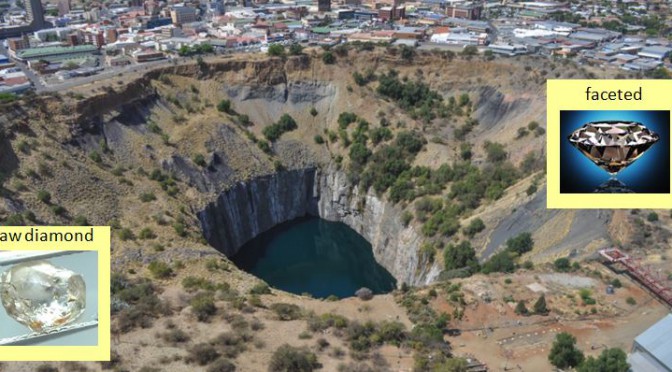 Published in the April WCGMC Newsletter

Diamonds are found in very unusual magmatic intrusive bodies called kimberlites or in alluvial deposits resulting from the weathering and erosion of kimberlites and the concentration of the hard and resistant gems in placer deposits.  Kimberlites are pipe-shaped igneous intrusions that erupted from great depth.  With high gaseous and volatile content, they were able to fracture and penetrate the very thick continental crust, often encapsulating blocks of the fractured host rock as they ascended. (Kirkley et. al.,1991).  Their pipe-like morphology is evident in the picture of the kimberlite pipe quarry from Kimberly, South Africa pictured in the header of this article.

In the past, it was thought that the origin of diamonds was in some way directly related to the magmatic processes involved in kimberlite magma generation.  However, modern radiometric techniques now permit very small mineral inclusions within non-gem quality diamonds to be dated.  This work has shown that the diamonds are actually much older than the kimberlite rock and the intrusion event. (Pay et. al., 2014)  In fact, nearly all diamonds that have been successfully dated have been found to be older than 1 billion years  and many are over 2 billion years old.  In contrast, over 95% of the kimberlites that have been dated are younger than 550 million years old and most are younger than 300 million years.  The abundant diamond-bearing pipes in South Africa all date around 120 million years ago.

It is now accepted that the diamonds found within the kimberlite pipes were scavenged from the host rocks within the uppermost mantle and deepest crustal regions as the kimberlite started its destructive and eruptive ascent to the surface.  Diamonds are also restricted to kimberlite pipes whose origins reached deeply enough into the earth’s interior to permit diamond as the stable form of carbon.  A pressure vs. temperature phase diagram for carbon (upper right) shows that depths exceeding 100 km are required for diamond stability.  At lower pressures (and temperatures) the stable form of elemental carbon is graphite. 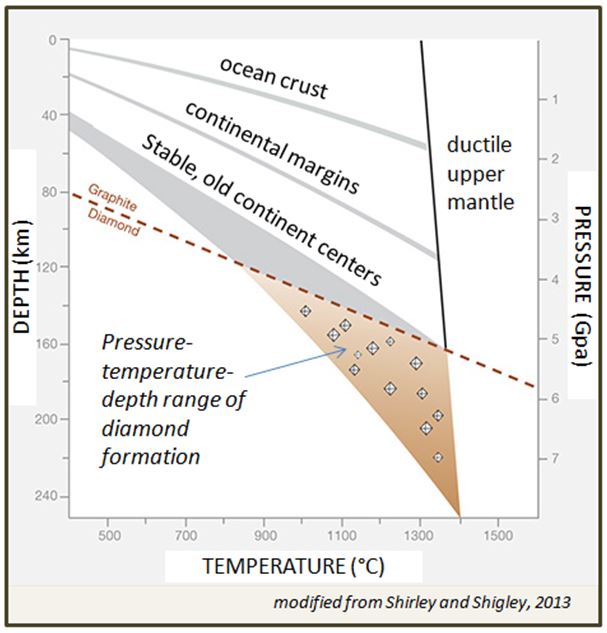 Pressure-temperature profiles for three crustal regimes are superimposed on the graphite-diamond phase transition in the plot above in gray.  Clearly, the geothermal gradient (temperature increase with depth) in oceanic crustal regions never reaches the diamond stability region before ductile upper mantle phases and processes preclude the successful ascend of a magma.  Continental margins such as the eastern United States are also too thin and too hot.

Although there are kimberlite intrusions in New York none are sourced deeply enough to allow for encapsulation of diamond-bearing rocks during ascent.  Only the stable old cratonic cores of the continents have the requisite pressure-temperature profile to allow diamonds to be sourced by ascending kimberlites.

So where did these diamonds grow that were later gobbled up and incorporated into kimberlites for their chaotic ride to the earth’s surface?  Well, most probably grew in place as grains within the igneous rocks of the mantle. 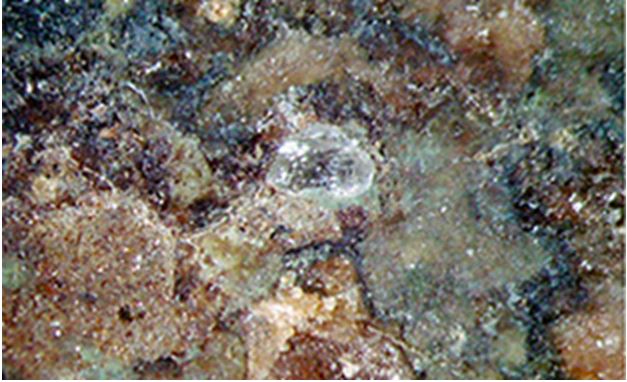 This is a incident light photomicrograph of a mantle-derived eclogite. Dark red is garnet, green is pyroxene (omphacite). Note the diamond in the center. The field of view is 6 mm across. (from Shirley and Shigley, 2013)

Although traditional diamonds are considered colorless, trace amounts of various elements can impart color and in some cases greatly enhance the value of a diamond.  Nitrogen is the most common impurity and typically imparts a yellow tint to diamonds, but scattered boron will impart a bluish tint (see December, 2014 WCGMC News for a story on the Hope Diamond).  Greenish diamonds can result from exposure to atomic radioactivity.

Of all the colors of diamond, pink is the rarest and, not surprisingly, the most highly sought.  Interestingly, the exact cause for the pink color is not well understood.  It is thought to result for an uneven pressure gradient working during the growth of the diamond creating a compressed internal structure.   In the gem industry this is referred to as “Plastic Deformation”. 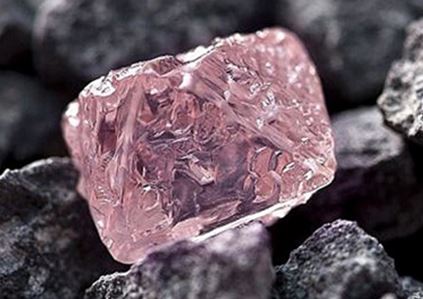 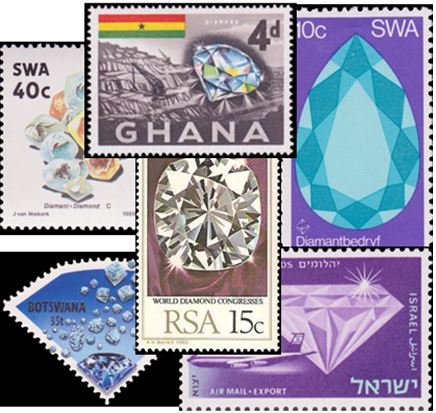 Many countries have featured diamonds on their postage stamps. The American Topical Association thematic diamond list has 116 stamps from 46 different countries.

How about this diamond?  Not so fast … 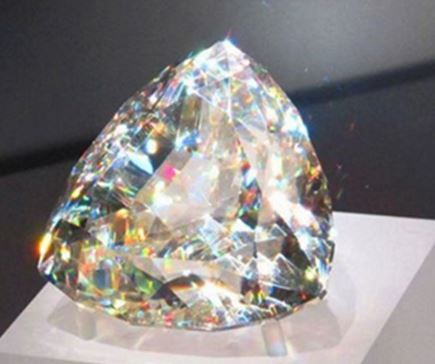 This may look like a faceted diamond, but it is not. This mineral has a hardness of 3.5. It is cerussite (PbCO3) and this is the world’s largest faceted cerussite. The Royal Ontario Museum in Toronto owns this 896 carat piece of lead ore from Tsumeb, Namibia. Picture is from the Amazing Geology Facebook page (see page 4).