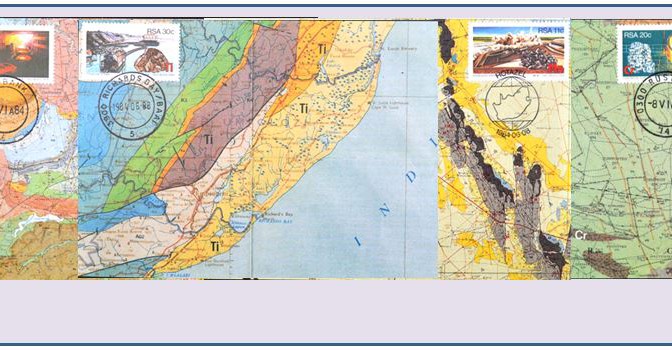 South Africa is known for both its gold production in the Witwatersrand region and for its dominance in the diamond industry provided by the kimberlite pipes in the eastern end of the Northern Cape Province.  But the resource rich country has more than gold and diamonds.  The four stamps issued in 1984 highlighted the role South Africa plays in the world’s production of manganese, chromium, vanadium, and titanium. 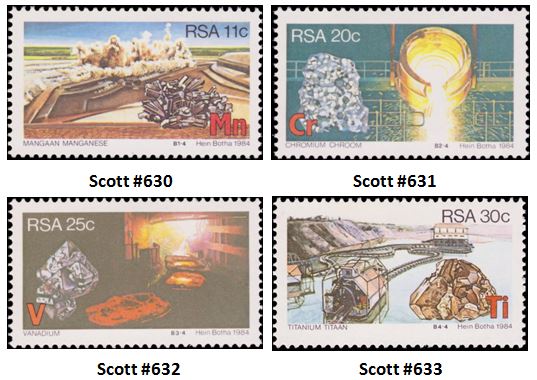 The stamps were designed and illustrated by Hein Botha, an artist known for designing a number of South African stamps, and his name appears in the lower right margin of each.  The Maximum cards issued together with the stamps are printed on linen card stock giving them a subtle embossed appearance when printed using offset lithography.  The postmarks are all dated July 8, 1984 and from locations where each metal is mined or milled.  The geologic maps cover the entire card and the stamps are positioned in upper corners that least distract from the map’s information.  The postmarks have been applied to the card by letter press.

By incorporating geologic maps into the design the Maxicards also highlight the geology of the country at the bottom of the African continent.  Not only are the continental rocks exposed across much of the central portion of the country, some of the oldest on the planet, they are also unique in their exposure, their geologic origin, and in their importance as a global resource of numerous strategic metals.

MANGANESE (Mn) is featured on the 11 cent stamp (Scott #630) and on Maximum Card S10.  The stamp depicts a mineral specimen of manganite in front of a blast scene from one of the open pit mines in the Kalahari Manganese Field region of the Northern Cape Province.  The postmark town of Hotazel, South Africa highlights a small town (population 2000) in the center of the manganese mining region.  And yes, the town does take its name from the farm where it was built and it is a pun on the expression “hot as hell”.

Manganese is a critical metal in the manufacture of steel, contributing to the product’s hardness and strength.  The transition metal also promotes deoxidization during steel production leading to corrosion-resistant steels.  As a result over 90% of the manganese recovered in the world is consumed in steel production.  Given that South Africa is host to 75% of the world’s identified manganese reserves and 31% of manganese exports by value in 2013[1], it is no surprise that manganese was included in this set of strategic resources. 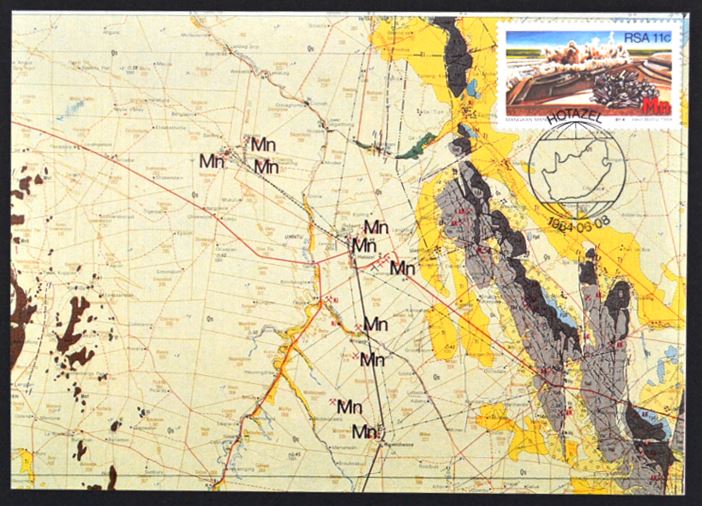 The manganese ores of South Africa are found in the  Precambrian sedimentary rocks of the Transvaal Supergroup.  Some are exposed, but most are shallowly buried by wind blown sands in the southern reaches of the Kalahari Desert.  Most are mined in open pits after the overburden is removed.  The locations of ten open pit mines are marked by the chemical symbol of manganese (Mn) on the Maxicard.   Smaller accumulations and mines are also shown in red, some cropping out to the east where the host units can be mapped in gray and brown.

The manganese ores were deposited in shallow protected seas over 2.2 billion years ago when oxygen levels in both the atmosphere and the ocean were low, but increasing.  As levels of oxygen rose, iron and then manganese, which were previously soluble in seawater, were precipitated.  Both metal precipitates reined to the sea floor where they accumulated in layered formations [2].  Most of the world’s iron and manganese is recovered from deposits of this type which are collectively called “banded iron formations”.

Gabon is currently the world’s third leading producer of manganese, trailing only South Africa and Australia.  It is not surprising that they have featured manganese ore on two of their stamps.

CHROMIUM(Cr) is another important metal in the manufacture of steel and South Africa is fortunate to hold a much of the recoverable global chromium reserves.  The 20 cent stamp (Scott #631) features the mineral chromite and a smelter pour where unwanted molten slag is poured off allowing the molten chromium to be concentrated.

The chromite ores in South Africa occur in the Bushveld Igneous Complex, a series of layered mafic intrusions (LMI) where the mixing of magmas permitted the mineral chromite to crystallize and accumulate in layers at the floor of the magma [3].  The green unit dominating the regional geology on the Maxicard geologic map is the 2050 million year old Rustenberg Layered Suite of the complex.  Chromite-rich layers (in brown) occupy a NW-SE trend within the western lobe of the Suite.  The town of Rustenberg, featured on the Maxicard postmark serves as a mining center. 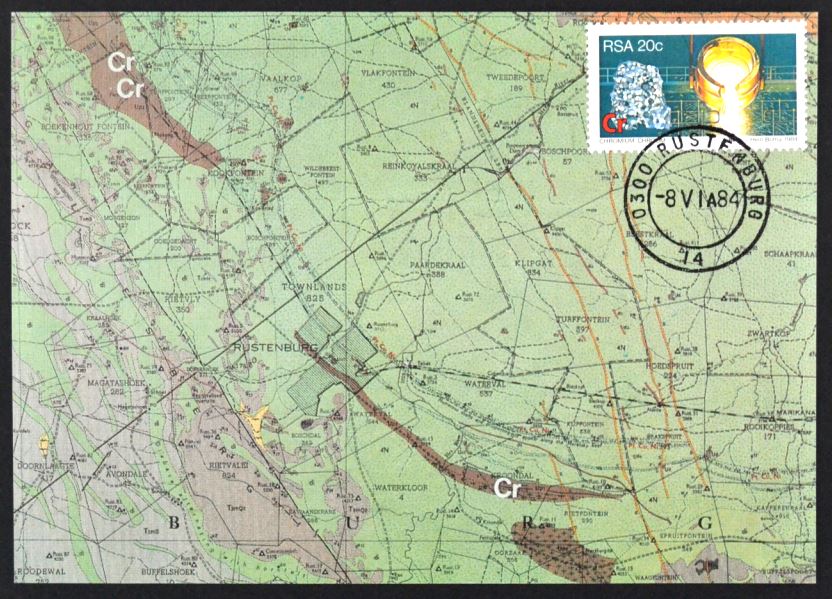 In 2014, South Africa produced 12 MT (or more than 40%) of the 29 MT of worldwide chromium production.  Over 95% of that chromium was used in metallurgical applications with about three quarters of it finding its way into stainless steel [4].  With a minimum of 10.5% chromium by mass, stainless steel does not readily rust, corrode or stain although its resistance is reduced in low oxygen, high salinity, or poor air circulation environments.

The layered nature of chromite ore is depicted in stamps issued by Zimbabwe and Greece.

VANADIUM (V) has atomic weight 23 and is a silver, ductile transition metal.  The 25 cent stamp (Scott #632) depicts ferro vanadium, a refined concentrate containing between 50 and 78% vanadium and a row of ore carts carrying molten ferro vanadium from the smelter.  A very small amount of ferrovanadium added to steel greatly increases its strength, particularly when introduced as a carbide compound.  More than 80% of vanadium produced is used to produce carbide steel, most of the remainder is used in non-ferrous alloy production. [5] 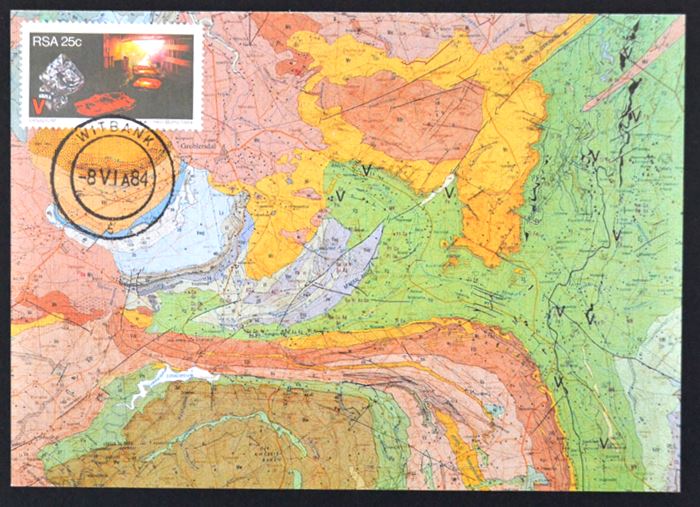 Most of the vanadium mined in South Africa is recovered from titaniferous magnetite in the Upper Zone of the Bushveld Complex.  Although the V-rich seam can be traced fully around the complex most of active mines are on the eastern side of the complex where the dip of the seam is less extreme and mining by open pit is more economic.  The vanadium occurs in solid solution, replacing up to 2% of the trivalent or ferric iron in the magnetite lattice [6].

South Africa has about 22% of the world’s known vanadium reserves and was responsible for an estimated 27% of world production in 2014.  They rank third in reserves behind China and Russia and second in production behind only China [7].  The value of South Africa’s vanadium resources jumped when uranium mines where V was recovered as a by-product were forced to close in the 1980’s.

The city of Witbank, featured on the postmark, is the site of the first industrial plant for recovery of vanadium.  The plant, commissioned in 1957, deploys a roast-leach process to concentrate V as vanadium pentoxide, a brown/yellow solid with the composition V2O5 [6].  After milling and magnetic separation, the magnetite is roasted before being subjected to a series of acid leachs and finally evaporation

TITANIUM (Ti) is featured on the highest value 30 cent stamp and on Maximum Card S13.  The trigonal and rhombohedral character of the mineral ilmenite (FeTiO3) is depicted on the stamp, but the mining operation is a placer dredging scene from the Indian Ocean coastline.

Although the ilmenite in the placers is sourced from the mafic rocks of the Bushveld Complex, it is naturally concentrated by sedimentary processes before it is recovered.  This natural concentration phenomena greatly reduces the cost of recovery although some titanium is recovered as a by product of vanadium mining.  The largest mining areas are around Richards Bay, near the bottom of the postcard and the site of the Maxicard postmark. 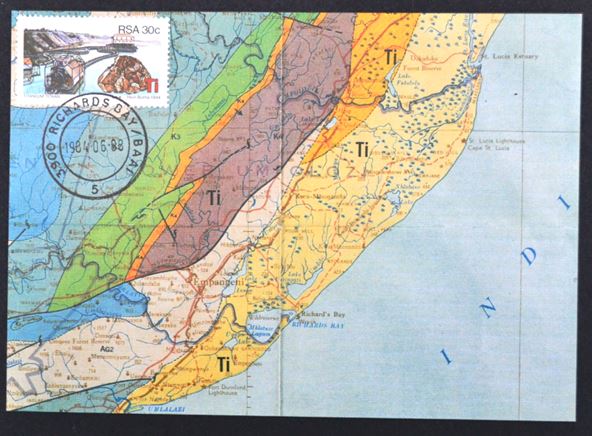 Many of the eolian dunes of the southeast South Africa coastal area contain more than 10% heavy minerals which are dominated by ilmenite.  Dredging and heavy mineral separation are relatively easy processes although the effort can be environmentally devastating [8].  South Africa is the second largest producer of titanium-bearing minerals, contributing 22% of the global output or roughly 6 million tons in 2011 [9]

Dredging for ilmenite rich sands also occurs in Senegal and was featured in a stamp from that west African nation over 50 years ago. 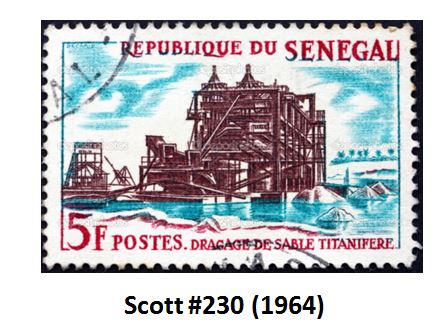 Although titanium metal has a high strength to weight ratio and is therefore desirable in the aerospace industry, it is very expensive to commercially extract titanium from an oxide compound.  Thus, less than 5% of mined titanium product is used in steel production.  The remainder is used in as pigment in paints, and in paper and plastics where the oxide product (TiO2) is adequate [9].