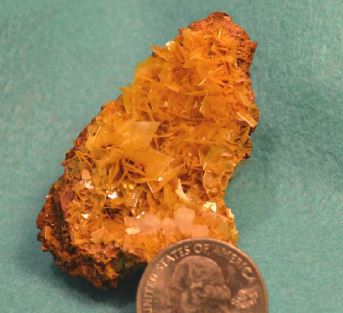 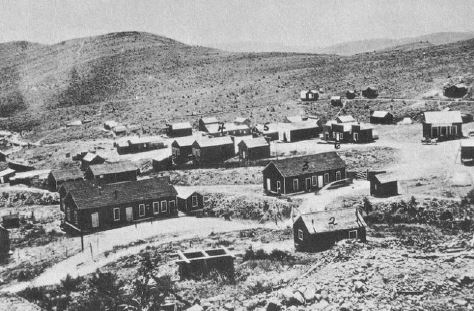 Total Wreck, Arizona in 1885 – Now a ghost town at the end of a virtually impassable 4-wheel drive trail, Total Wreck once was the home of five saloons, three stores and over 200 miners and prospectors. The prize was silver and over half a million dollars of the metal were extracted in about two decades. In the lower photo from 2011 all that remains are some mine dumps, some open adits and shafts, and a few overgrown dirt trails. (Both photos from Rose, 2013)

Have you heard the expression PbMoO4 is Love? Well, that was the expression in Arizona in the 1980’s when my graduate student colleagues and I would tramp about the state looking for that elusive wulfenite specimen at some 30 odd locations known to offer the brilliantly colored spectacular mineral. Heck my 1970-something Ford Falcon collecting wagon even hosted a bright blue bumper sticker that simply read “PbMoO4 is Love “. That car saw them all. There were, of course, the famous locations: the Red Cloud Mine in Yuma, the Silver Bill Mine in Gleeson, the Rawley Mine in Theba, the Glove Mine in the Patagonia Mountains. But there were also the not so famous mines where fragile panes of wulfenite could be coaxed from adit walls or carefully chiseled from dump material. My favorites were the Total Wreck Mine in the Empire Mountains, the Finch Mine in Gila County, and the Dogwater Mine in Aravaipa but that list too is long. 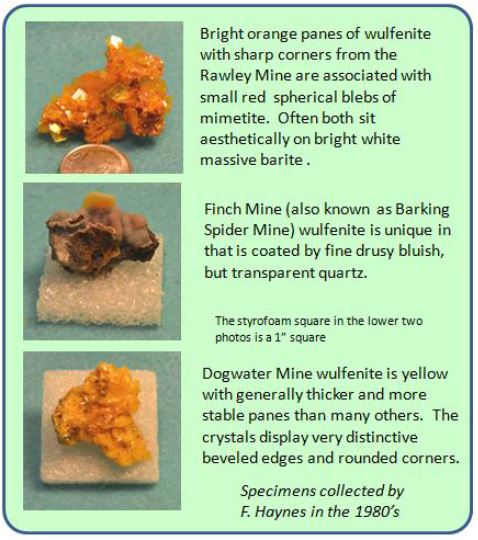 Wulfenite is a relatively simple mineral within the scheelite group of minerals. The colorful tetragonal mineral is characterized by three perpendicular axes, two of which are of equal length. The core of the mineral is the molybdate radical (MoO4)2-, with 4 oxygen atoms surrounding the central molybdenum atom in a tetrahedral structure. With a double negative charge this radical is receptive to capturing a single Pb2+ cation to form wulfenite. Because of the relative sizes of the Mo and O atoms in the core tetrahedral, the lattice is distorted resulting in an extremely short third axis. For this reason, wulfenite crystals are thin and tabular and often resemble small transparent panes of colored glass.

The color of wulfenite has nothing to do with its primary elemental composition. In fact, pure PbMoO4 is essentially colorless or white. However, lead is not the only divalent (2) transition metal ion available to combine with MoO4 ions, It is trace amounts of vanadium, manganese, chromium, and titanium that depart the wonderful yellow, orange, and red colors. These elements do this by absorbing the violet, blue and green visible spectra. The variation in color, together with a variety of modifications in crystal structure including beveled edges, and bipyramidal or dipyramidal terminations add to the attractiveness of wulfenite.

Perhaps the most famous wulfenite locality of all is the Red Cloud Mine just north of Yuma, Arizona. Silver was mined there sporadically from 1860 to 1941, but it is the bright red, large reflective crystals set onto a black volcanic matrix that set the site apart. They are sought by collectors worldwide for their color, their luster and the size and perfection of the beveled crystals. My visit there was not particularly productive. In fact, from a wulfenite point of view, it could actually be called a bust. But not everyone can say that they have collected underground at the Red Cloud Mine, and I have since acquired multiple copies of the stamp! 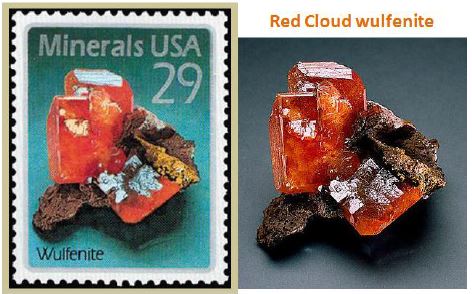 Wulfenite on a US stamp: In 1992, the USPS issued a set of four 29 cent stamps with mineral specimen from the Smithsonian Museum in Washington D.C. The museum specimen from the Red Cloud Mine on the right was one of the featured minerals.

With a density of 6.5-7.0 (quartz is 2.65, calcite is 2.71), wulfenite is among the densest of all transparent minerals. However, because most of the elemental bonding in wulfenite is due to weak ionic bonds, wulfenite is soft, registering just 2.5-3.0 on the Mohs scale, or slightly softer than calcite.

Wulfenite forms as a secondary mineral in the oxidation zones of lead-rich ore deposits. Most often it is found in arid regions where low water tables allow the oxidation zone to extend deeply below the surface. The arid and very metalliferous regions of the American southwest and in parts of central and southern Africa are perfect places for wulfenite to form and be preserved.

As an oxidation zone mineral, wulfenite is often associated with other metals and their oxidation products. Cerussite (PbCO3), vanadinite (Pb5(VO4)3Cl), and mimetite (Pb5(AsO4)3Cl) are natural associations given the presence of lead in the mineral formula. But in many of the mineralized regions across Arizona copper is a common metal and it is not uncommon to find copper carbonate minerals is association with wulfenite. One of my favorite haunts where both wulfenite and copper minerals could be found was the Silver Bill in Gleeson, Arizona (just a mere 15 miles west of Tombstone if you are a crow). 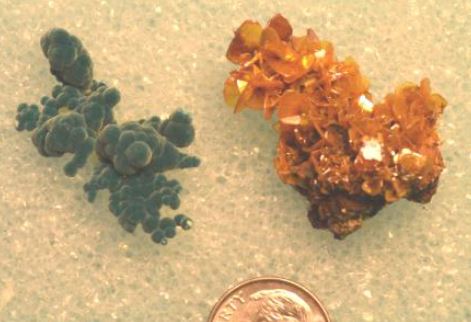 Minerals from Silver Bill Mine, Gleeson, AZ: Wulfenite on the right, rosasite on the left. Rosasite is a copper zinc carbonate (Cu,Zn)2(CO3)(OH)2 which forms velvety connected balls.