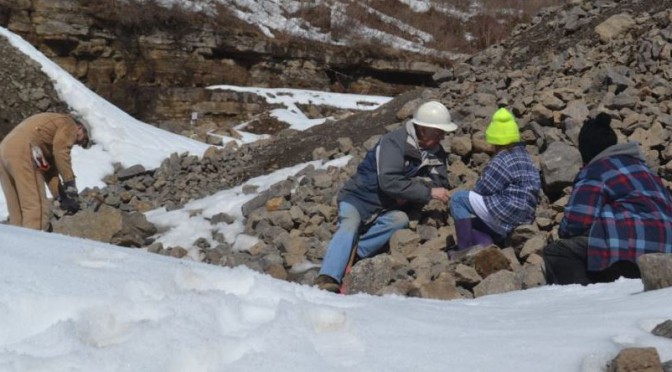 Spring has arrived and Wayne County Gem and Mineral Club  did not let any grass grow under its feet before activating its field season.  In fact, we did not even let the snow melt.

It was April, it was opening day, and there were diamonds involved.  But no, it was not baseball. Rather, April 1 is opening day for “Herkimer diamond” hunting at Ace of Diamonds Mine in Middleville, NY and 12 intrepid WCGMC members put on their boots and their woolies and made the annual trip.  Exposure was limited and the snow prevented the owners from bringing in new rock.  But there were still “diamonds” to be found and the sun was out to warm our hearts if not our hands. April 1 may actually be more tolerable than August 1.  We even signed up a new member while digging, welcoming Donna Dow to our growing family of crazed collectors. 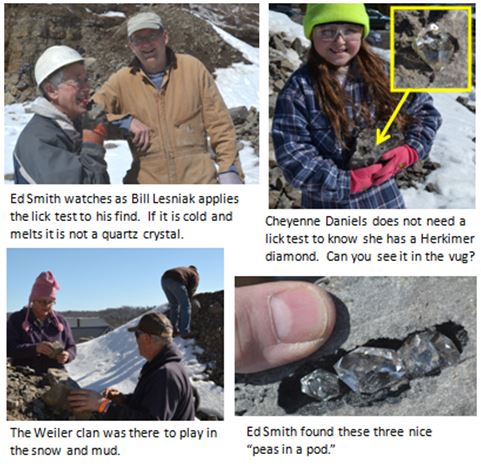 Three days later it was colder with a brisk wind, but seven fossil enthusiasts gathered at the Long Pond Road site on the Erie Canal in search of trilobites.  The Middle Silurian Rochester shale along the Erie Canal is only exposed when the water level is lowered in the winter and the snow and ice are not present as overburden.  Practically speaking this means just a few short weeks in latest March or early April and even then conditions can be less than ideal. 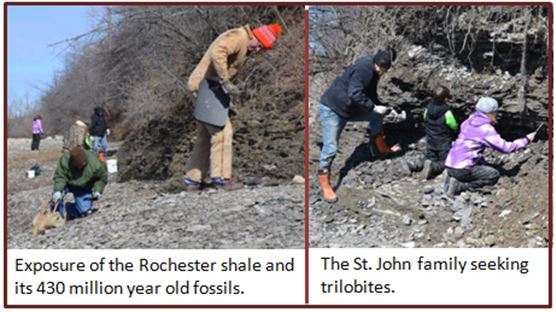 Both species of trilobites known to inhabit the Middle Silurian of the region (Dalmanites limulurus and Trimerus delphinocephalus) were recovered in their entirety. Ken St. John unearthed a partial cephalopod that we suspect is from the Genus Dawsonoceras.   Specimens of the brachiopods Coolina subplana and Leptaena rhomboidalis were frequently encountered in the shaly units of the Rochester shale. 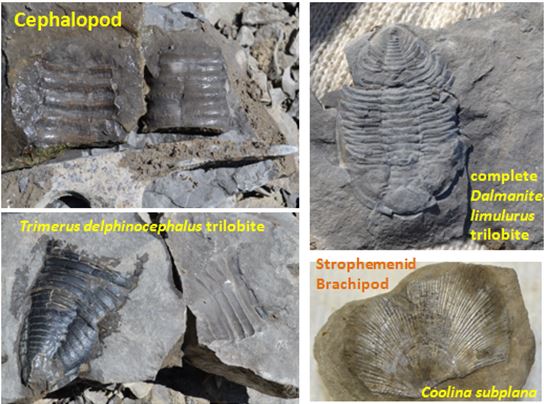 A few of the prize finds from a day along the Erie Canal.

Our third trip of April took 8 of us to East Bethany on April 18th and a pair of outcrop exposures where fossils are practically lying on the surface waiting for the curious collector to happen upon them.  Good variety and abundance is somewhat offset by quality as most specimens appear to have been abraded and tumbled a bit before they found their final resting place on the Middle Devonian seabed for burial, preservation, and mineralization.  Nevertheless it is fun to collect and identify the coral and brachiopod species.

The first stop was along Bethany Center Road where corals of as many as 5 species can be picked off the surface or unearthed just below to crusted soil surface.  The north side of the old railway line exposes Centerfield limestone member of the Ludlowville Formation.

Some of Christine VanNeel’s finds off Bethany Center Road. Unwashed on the left, cleaned and scrubbed on the right. Can you see the various corals, a few brachs, and the bryozoa?

Around noon, the group moved a bit west and a bit up section in the Ludlowville Formation to look for trilobites and other goodies in the Wanakah and Ledyard members off of Francis Road.  Fossils are sparser along the old railroad bed here, but the variety is good and the chance for trilobites holds the collector’s attention. 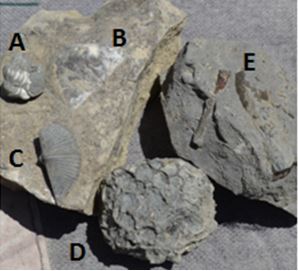 Some of the groups’s finds from the Francis Road site. A. Sue’s small but complete enrolled trilobite, B. a Strophemenid brachiopod on matrix, C. Fred’s Mucrospirifer, D. Gary’s Pleurodictyum americanum, and E. Jerry’s fossilized nautiloids.