Algeria is credited with issuing the first fossil stamp (below left).  The country commemorated the XIX International Geological Congress held in Algeria in 1952 by depicting an ammonite (Berbericeras sikikensis).  The first set of prehistoric animals was issued by Poland in 1965 (one is depicted below right).  Colorful and popular this set of 10 stamps was the first of literally a couple thousand dinosaur stamps issued globally in the later half of the 20th century. 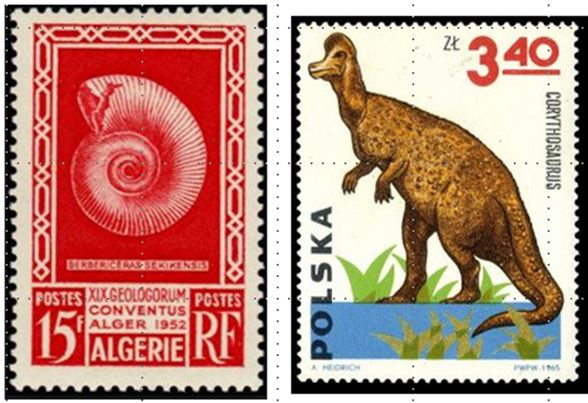 The first fossil stamp from Algeria and a Corythosaurus from an early set of dinosaur stamps issued by Poland.

Prehistoric life on postage stamps provides a basis for numerous sets (multiple stamps connected together by perforations issued at the same time by a particular country). Some countries have carried it one step farther by issuing sets over several years with the same theme but different stamps with different rates.

The United States has issued several prehistoric sets.  One of the favorites is a 1997 set of 15 beautiful dinosaur stamps issued in a panorama setting known to philatelists as a souvenir sheet.  There are two panes in the sheet, the upper half contains eight stamps and depicts a Jurassic scene in Colorado, while the lower half depicts seven stamps in a Cretaceous scene in Montana. 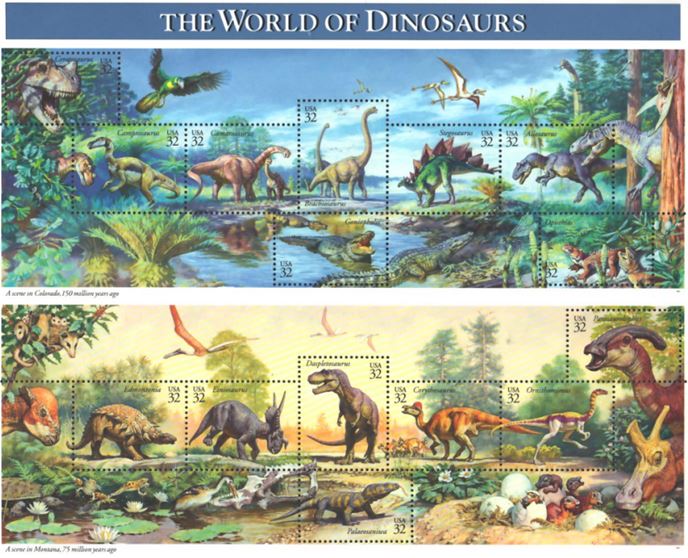 We will start with the stamp in the lower right of the grouping of four depicted beneath this paragraph.  The stamp depicts the Silurian Sea Scorpion Eurypterus remipes, which is moderately rare but can be found in rocks of Southern Ontario. These animals were formidable predators in the Silurian seas, evolving into several different species ranging from a few inches to over 7 feet. Some Eurypterids possessed swimming paddles while others wielded large, dangerous, lobster-like claws. Furthermore, New York State elevated the Eurypterid to the status of State Fossil. 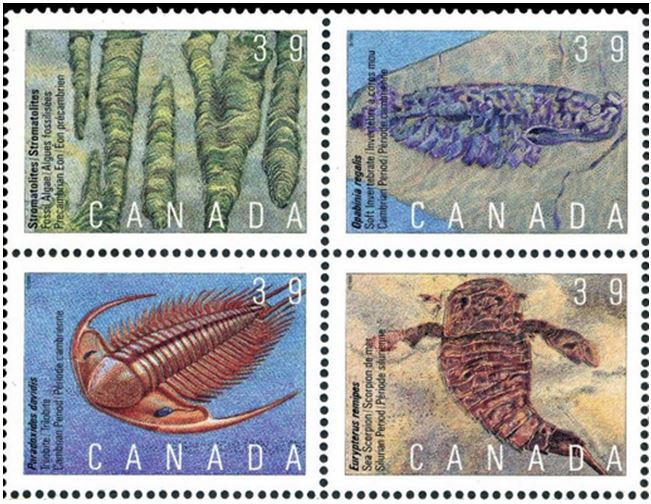 The stamp in the lower left of the block depicts the Cambrian trilobite Paradoxides davidis from the Avalon Peninsula of Southeast Newfoundland. This trilobite is also common in Wales and helped geologists reconstruct the configuration of the continents and ancient oceans as they existed 500 million years ago. Furthermore, this trilobite in association with other fossils from the same rocks has provided important evidence for continental drift (Owens, 2007).

Paradoxides is so well known that a fossil from Morocco even found his way onto a Spanish postal card in 2013.

Precambrian Stromatolites are illustrated on the third stamp (upper left). Stromatolites are layered accretionary structures formed in shallow warm water by the trapping, binding, and cementation of sediments by microbial mats of cyanobacteria. Blue-green algae first evolved approximately 3.5- 3.8 billion years ago and constitute the first record of life on Earth.  Although extremely primitive life forms, they are still living today and can be observed in Shark Bay in Australia (Riding, R. 2007).  A collector can find Cambrian Stromatolites while digging Herkimer diamonds in the Little Falls Dolomite Formation, or Silurian Stromatolites while digging for fluorite and calcite in the Lockport Formation at the quarries of western New York.

The final stamp in this set portrays an extinct creature of the most peculiar morphology.  Initially presented in a scientific meeting in 1972, Opabinia regalis was regarded as a hoax but was soon recognized as one of the soft-bodied organisms of the Middle Cambrian Burgess Shale fauna from British Columbia (Smithsonian – Department of Paleobiology, 2015). Indeed this creature with its 5 dorsal facing eyes (possibly for vision in all directions to avoid predation) and long proboscis used for feeding surely qualifies as an oddity. 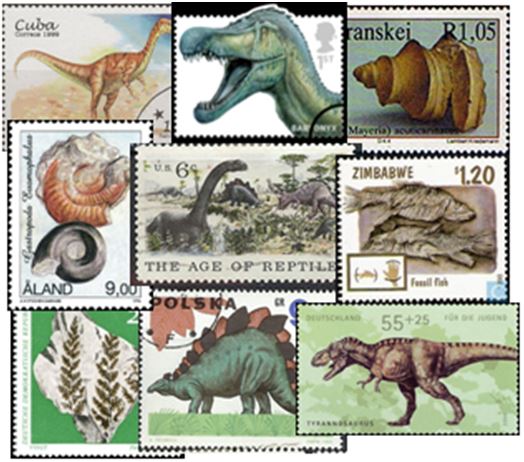 How many of these prehistoric creatures can you identiify?

So it is seen that when the snow is a mile high and the temperatures are bitter cold, a fossil collector may still find an amazing array of prehistoric animals, despite being on paper in the form of postage stamps.

Owens, R.M., 2007. A Welsh Fossil on a Canadian  Postage Stamp in www.museumwales.ac.uk.