Another very interesting guest article for the April 2015 WCGMC newsletter.   Ken St. John has graciously permitted me to place his note onto my website.  Clearly, the information contained here complements that I had previously posted about this most interesting location.

To be honest, I can’t remember when I made my first trip to the Rose Rd. site in Pitcairn.  It was a few years ago and Bill Chapman was involved in the introduction to the site.  My first visit was a daytime affair with the Wayne County club in search of titanite.  I do recall that titanite was something new to me at the time and that I was excited to be there with the club and my kids.

The site is a wooded outcrop beside a phone tower road.  No problem at all in getting to the place.  There are essentially two parts to the site up and downhill and during the first visit we pretty much worked the downhill location.  My nicest pieces contained wollastonite, titanite, apatite, albite and diopside.  The titanite is a dark brownish color while the diopside is a rather coarse light purple massive mineral.  Mixed with green apatite and white wollastonite specimens were both interesting and attractive.

It was much later when doing a routine sweep of my collection with a short wave UV light that I discovered that the Rose Rd. rocks were more interesting under the UV light than they were in daylight.  It’s not unusual to see a three color response with wollastonite fluorescing a light tan, albite a cherry red, and an invisible coating glowing a bright green.  As a member of the Fluorescent Mineral Society and a Franklin collector, I was impressed.  So were the other FMS members to whom I showed the pieces at the annual meeting.  From then on, I collect at Rose Rd. with an eye toward the fluorescent.

For me, Rose Rd. has become as much of a source of fluorescent minerals and a site of night digs as it is for the daylight collecting.  On later night digs the search was broadened to include the uphill site and long wave lights were added.  A short wave UV emits light with a wavelength of 253 nm, a long wave light varies in wavelength, but is typically in the 365nm range.  Visible purple light is in the low 400’s.  Minerals that fluoresce brightly in short wave might not glow at all in long wave and vice versa.  Some minerals will fluoresce in both, but almost never with thesame intensity or color response.  There are many more short wave fluorescing minerals than long wave. 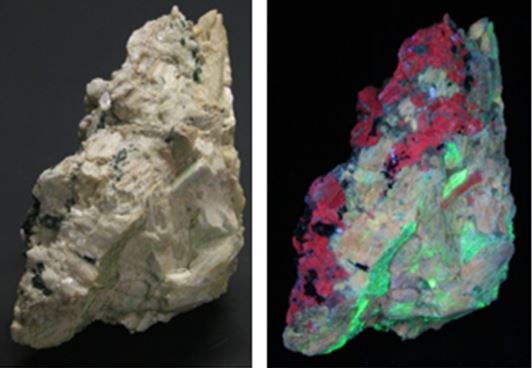 This 4” high piece is from my first trip to the site. On the right is a plain light photograph. On the right the same specimen is shown in UVC (253nm) light . The albite fluoresces cherry red, the wollastonite tan and an unidentified coating is bright green.

This general rule is upheld at Rose Rd.  The main long wave fluorescing mineral is scapolite often associated with analcime.  In short wave, we find diopside, albite, edenite, fluoredenite, phlogopite mica and to a lesser degree analcime and scapolite.  Identifications have been done at Bucknell University by X-Ray diffraction.

This 4” by 3” specimen from the downhill site appears in long wave at left (bright yellow scapolite with blue analcime), short wave in the center (dull blue diopside) and room light All photos were taken with a tripod mounted Canon I2 megapixel digital SLR, using the camera’s automatic focus and settings. The specimens were set on black foam core board. The SW pictures were lit by a pair of 95 watt lamps set to either side, while the LW shots deployed a pair of hand held lights, perhaps 20 watts in total, arranged much closer to the specimens.

Beginning UV mineral collectors will often start with inexpensive long wave lights.  This puts them at a bit of a disadvantage when the numbers of long wave fluorescing minerals are concerned, but not at Rose Rd.  Brilliant yellow long wave fluorescing scapolite is scattered all through the woods at the foot of the downhill site giving beginning collectors all the material they need to sort through for hours.  Relatively tiny amounts of corundum were also discovered in the scapolite in the area.  There is also a small amount of fluorescent (blue) analcime and non-fluorescent nephrine in the downhill scapolite. 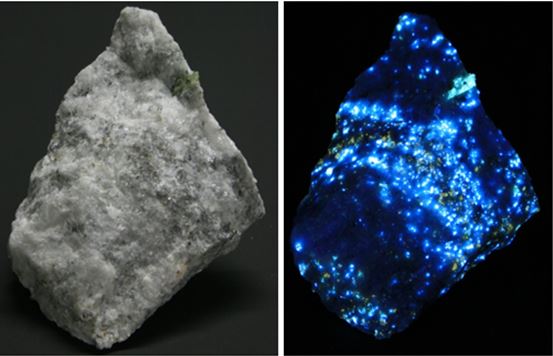 Rose Road is a site that offers something to almost everyone (no fossils).  You can collect classic Adirondack specimens such as apatite, wollastonite and titanite closely associated with highly fluorescent scapolite, analcime and albite.  There are traces of corundum and edenite and some of the best blue calcite ever seen.

The beauty of exposing the rocks to UV is that it adds an entire dimension to collecting.  The classic problem faced by fluorescent collectors is the cost of equipment.  Special short wave emitting field lights sell for hundreds of dollars while a long wave hand held light can be had for under $20.    On Rose Rd. an inexpensive long wave light is all any collector needs to light up the forest floor.  On Rose Rd. anyone can be introduced to the wonders of night collecting with a UV light.   Combining the ease of access, the variety of specimens and the ease of night collecting makes Rose Rd. a very special place.

My notes on this article and location:

Rose Road is a privately owned fee site off Route 3 near Pitcairn, NY.  In recent years, the owner, who lives on site, has been amenable to club visits except during hunting season (turkey in spring and deer in fall).

Steve Chamberlain and George Robinson have published two excellent reviews of the site.

The uphill location Ken refers to in his report is the wollastonite skarn of Chamberlain and Robinson.  Those authors refer to the more recently discovered scapolite-rich downhill site as the purple diopside mound (PDM).

Much of the tan wollastonite has been replaced by fine grained diopside.  We believe the identification, by repeated X-Ray diffraction, of edenite and fluoredinite, and perhaps also nephrine, is new for this location.  At least for the small edenite crystals hidden in the marble, it seems that night collecting with UV lights may have been instrumental in their detection.