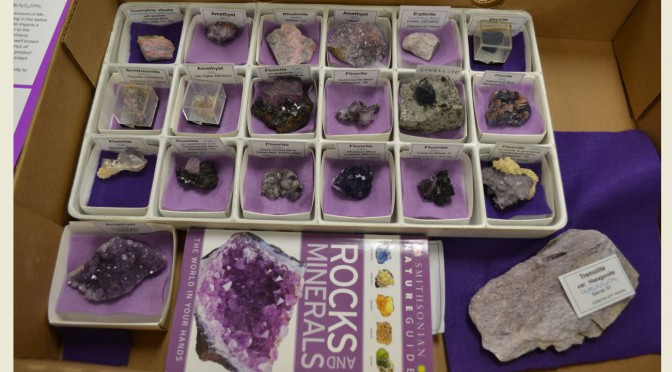 Written for the April 2015 WCGMC newsletter

Since the days of the Roman Empire, purple has been the color of royalty.  As a combination of red and blue, purple is not a spectral color and therefore lacks a defining spectral wavelength.  However, that has not prevented people from claiming purple to be their absolutely favorite color.  Women build their wardrobes around their purple dresses, folks paint their bedrooms purple, gardeners plan their seasonal blooms from tulips to irises to petunias, and yes mineral collectors must have plenty of purple in their displays.  Fortunately they have some wonderfully gorgeous minerals from which to choose.

March 13th was Purple Mineral Night for the Wayne County Club.  Members brought in their purple minerals and we all drooled over them. Naturally there was lots of amethyst in attendance.  Simple clear quartz (SiO2) is colored to various shades of purple when small amounts (< 20 ppm) of iron (Fe) replace Si when the quartz is naturally exposed to ionizing irradiation.  The smaller iron atom leads to lattice distortions that effect light passage imparting the color variation. With a hardness of 7, amethyst makes a wonderful gemstone as well as a colorful mineral specimen.

Amethyst comes from the ancient Greek word “methystos” which means intoxicated.  It was believed that drinking from an amethyst tankard protected one from becoming drunk! 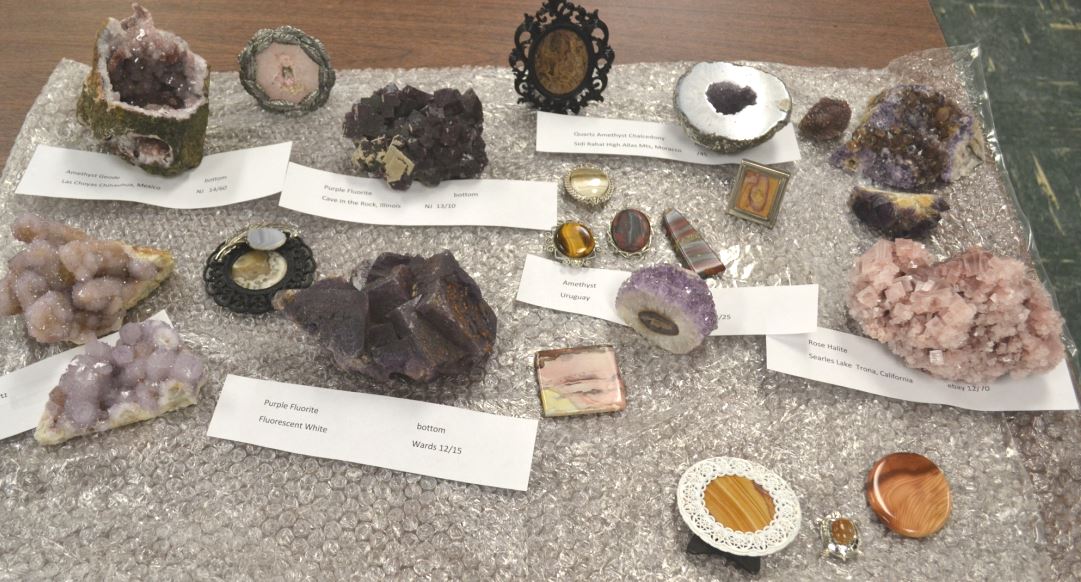 Linda cheated a little adding some very nice polished cabochons she has been working on to spruce up her display. The picture rock in the lower right is a stunner.

I decided to set my specimens (or many of them) on purple felt to accentuate their royalty.  They are shown above in the featured image.  Included are a number of miniatures from my locality fluorite collection.  Apparently the Smithsonian agrees that purple rocks, as they placed a brilliant amethyst front and center on the most recent edition of their Rocks and Minerals Guidebook.

Of course, fluorite (CaF2) comes in many colors, but there was no shortage of purple fluorite on display.  Fluorite is probably the most useful of the purple minerals.  Cubic in form, fluorite is used as a flux in smelting, as an additive to glass and enamels, in optics, and for generating hydrofluoric acid.  It is also a key ingredient in most of today’s toothpastes. 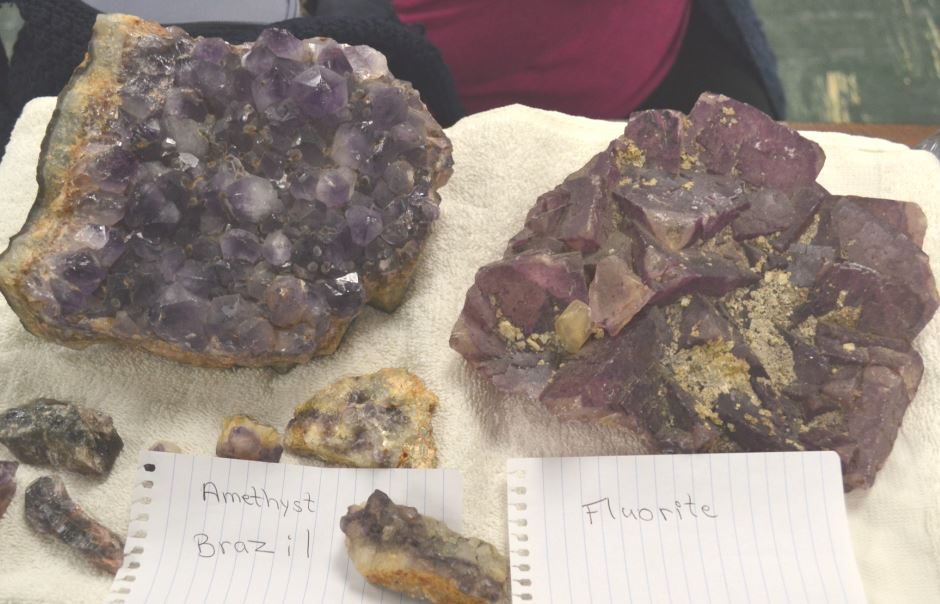 Kathleen came with really nice cabinet pieces of both amethyst and fluorite.

There was not much of the brilliantly iridescent copper sulfides, bornite (aka. peacock ore or covellite) to view.  There was one bladed covellite (CuS) specimen from Summittville, Colorado in Fred’s box (middle row, second from right), but it appears WCGMC needs to go to Arizona for some copper mineral collecting.  We should have gone in February to escape the arctic month while spending time and $$$ at the Tucson show! 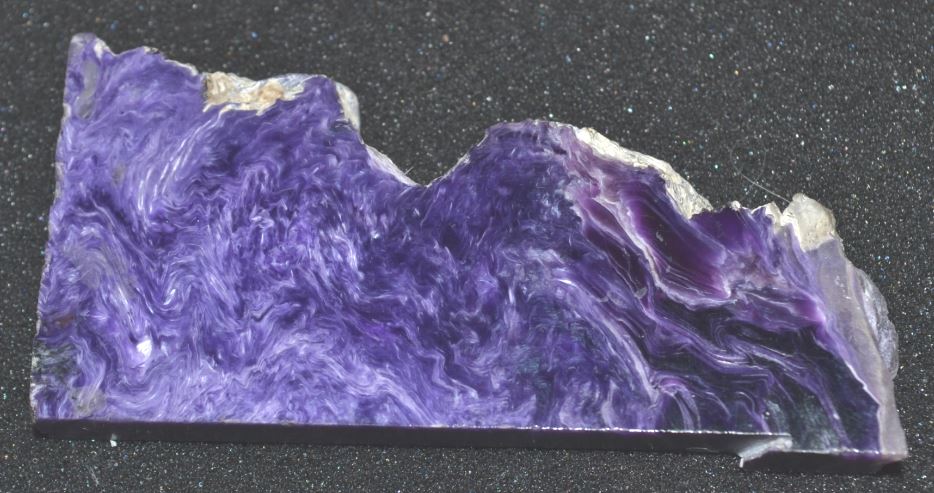 In full disclosure, I had to look up charoite when Glenn displayed this 3” wide polished slab.

Charoite, K(Ca,Na)2Si4O10(OH,F)·H2O, is a rare silicate mineral found only in a remote location in Siberia, Russia and was not identified and named until 1978.  It is named for the Chara River.  Although always massive in form, the unusual swirling, fibrous appearance and the brilliant purple color make it a lapidary favorite.  It is a product of limestone alteration in the presence of a very high potassium-bearing syenite intrusion.

In addition to mineral specimens and polished pieces, there were gems on display.  With a hardness of 7 and often perfectly clear, amethyst has the distinction of being the birthstone of February. 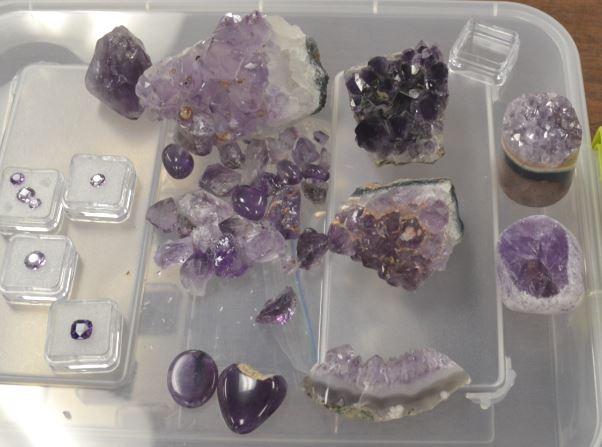 Ed displayed amethyst in all its forms from raw crystalline mineral specimen, to polished cabochons, to fully faceted gems. All in view are his creations, well after mother nature did her part. 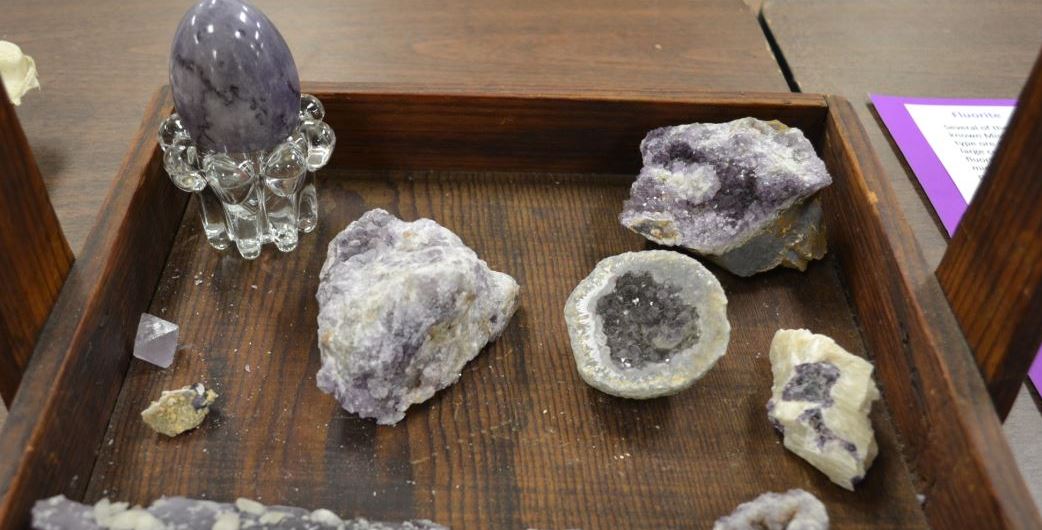 Sandy and Rich brought a interesting combination of lapidary and mineral specimens including a geode.

One cannot complete a discussion of purple minerals in New York without discussing hexagonite.  A small amount of Mn substituting in the lattice of tremolite imparts a purple color to the amphibole mineral.  Balmat, NY is well known for the occurrence of hexagonite as a product of regional and contact metamorphism of dolomites in proximity to silicate rocks. 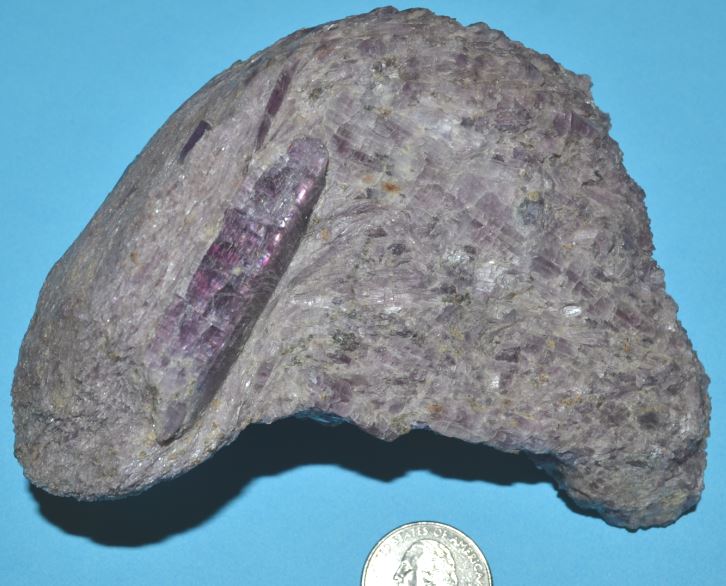 Ken had one of the many hexagonite samples on display on Purple Mineral Night.

And finally, Sue decided to take the concept of Purple Mineral Night to an entirely different level ! 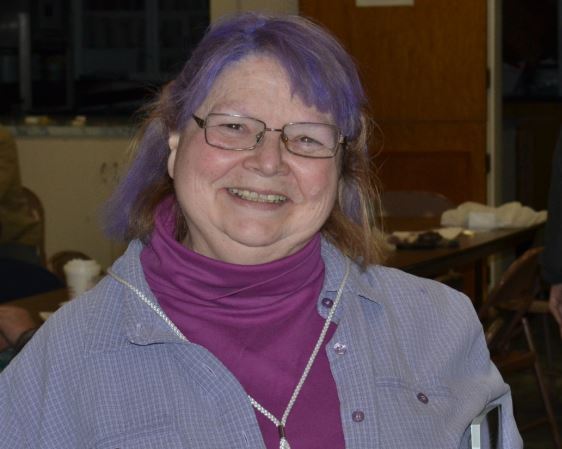 So, what is next, you ask?  Well, before we do green mineral night to see who has any emeralds or malachite, we are going to spend April’s meeting admiring each other’s New York fossils.  I cannot wait to see what Sue wears next month!