Published in the March, 2015 newsletter of the Wayne County Gem and Mineral Club (www.wcgmc.org)

It is the middle of February in upstate New York and the weather outside is not particularly conducive to mineral and fossil digs.  Yes, I can plan, and I am.  Yes, I can clean and organize last year’s bounty, and I try to make time for that, but even the rocks in the garden remain covered and out of reach.  BUT, there is another way to collect minerals in the winter and I keep busy doing just that when the spirit moves.  They can be collected on postage stamps.

Did you know that there is an international organization of folks who collect gems and minerals on postage stamps?   They call themselves the Gems, Minerals and Jewelry Study Unit (GMJSU) and they are one of 52 active affiliate organizations of the American Topical Association (ATA), a philatelic organization with almost 3000 thematic stamp collectors worldwide.  The GMJSU publishes a quarterly newsletter called Philagems International and maintains an Excel spreadsheet listing all stamps depicting minerals, gems, and mining.  At last count there are over 2700 individual listings although many reflect sets of stamps so the list of actual stamps is larger.  Of those listings, over 1500 are identified as strictly mineral stamps and over 400 as gem stamps. Over 90 countries are represented on the list.

First Day cover from the 1974 Mineral Heritage Set. The first day ceremony was held at the 1974 National Gem and Mineral Show in Lincoln, Nebraska.

The United States has issued two sets of mineral stamps.  In 1973, four 10 cent denomination diamond shaped stamps were issued depicting mineral specimens from the Smithsonian Museum of Natural History.  The tourmaline specimen is from the Tourmaline Queen Mine in San Diego County, California and since the stamp was issued the specimen has been affectionately dubbed the “Postage Stamp Tourmaline.”

The Postage Stamp Tourmaline (upper left) and the stamp
depicting the famous specimen. The designer benefitted from
a pen and ink drawing (upper right) by Wendell Wilson
(editor the Mineralogical Record).

Nineteen years later and with a postal rate that had almost tripled, a second set of four stamps was issued.  One of these, the Red Cloud wulfenite stamp, may be my favorite mineral stamp of all.  I have collected at the Red Cloud Mine, without much success, and believe the thick brilliantly red wulfenite from that mine is simply exquisite. 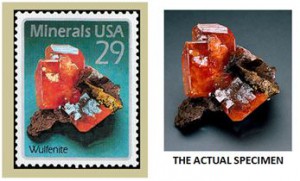 The Red Cloud wulfenite stamp of Sept., 17, 1992 was
designed by Leonard Buckley from the specimen that
remains on display at the Baird Auditorium of the Smithsonian.

I’d like to have that specimen in my collection, but I have settled for having the stamp and several versions of First Day covers.  The other stamps in this set reflect equally famous mineral locations.  See if you can pick them out in the collage at the base of this note?

By expanding your collecting worldwide, the variety and beauty of the stamps is amazing.  Some come in large sets of many denominations and even sizes, others come as single stamps.  Some commemorate minerals from the country issuing the stamps, others simply depict beautiful minerals or gems.  At this point I think I will just let some pictures do the talking. 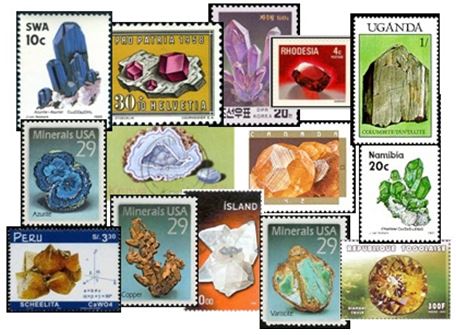 Are you short on space?  Are your flats of dirty minerals from last year stacked in the corner of the basement or the garage?  Not sure where you will put your finds from next summer?  Did you make a mess in the sink cleaning minerals?  Well, a good collection of minerals on stamps sits in a 2-3” space on a bookcase and generally requires no cleaning.  I just had to move mine from a 2” loose-leaf binder to a 3” binder and now I have room for many more acquisitions.  It was not a messy job.  I did not need soap and water and chemicals and none of them broke when I tried to move them.

Another great thing about stamps:  with a few notable exceptions most stamps depicting minerals are much more affordable than the minerals themselves.  Whether you collect them mint (with gum and unused) or after circulation and therefore cancelled, or whether you collect just the stamps themselves or prefer First Day Cover envelopes like the American Heritage envelope depicted above, most can be purchased for a few dollars and many for much less than that.  It is not hard to get started, but be careful, much like the real thing, it can be quite addictive.