Winter is approaching and at some point, I will likely rediscover my stamps collection and either acquire some new stamps or improve the organization of those I already own.  I certainly do not think I need another idea for a new collection, but if I did I believe I might look at the idea of Joint Issues.  I do have a few set aside just in case I change my mind.  I’m sure that looking for more might be an interesting thing to do at the next stamp show I attend

One aspect of Joint Issues is the pure variety in the reason countries come together to commemorate events, accomplishments, or cultural topics.  Some involve recurring relationships, such as EUROPA, but most are one time commemorations with a singular and unique purpose.  A collector could seek global issues, but it is also possible to build quite a collection with United States issues only.

The United States has participated in 45 joint stamps issues.  You can find a full list with a Google search.  The first was in 1959 when the US and Canada honored the opening of the St. Lawrence Seaway with single stamps depicting the maple leaf and an eagle atop a map of the Great Lakes.  Of course, this stamp (the Canada version) is best known for the rare error where the entire inset is printed upside down.  The correct US version and the Canada error stamp are depicted in the header of this note.

For those who prefer covers, the joint issue stamps can often be found together on First Day Covers.

The most common partner for US joint interests is Sweden.  The two countries have issued stamps together on 7 occasions.  The first commemorated the 200th anniversary of the Amity and Commerce Treaty signed between the countries in 1783.  The most recent stamps commemorated Swedish actress Ingrid Bermann, in 2015.  The US stamp was part of the ongoing Legends of Hollywood series. 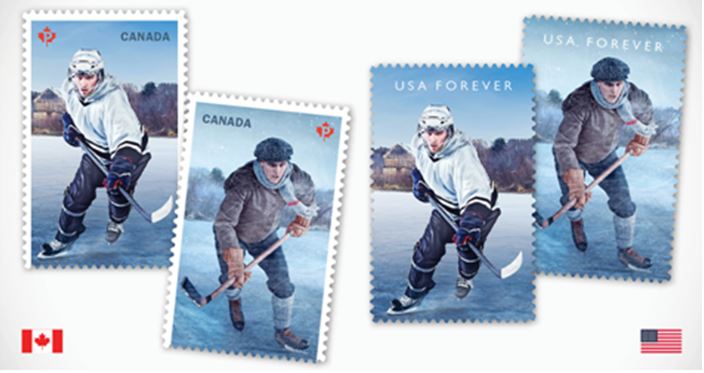 The most recent US joint issue was with Canada and commemorates the history of hockey. Each country issued two stamps, one with a hockey player wearing modern equipment, another with the “equipment” of 100 years ago.

Typically, the issues commemorate a mutual interest or an event shared by the United States and one other country.  However, several countries can be involved.  The largest number of countries joining the United States in a single joint issue is six.  In 2007, all of the Scandanavian countries joined the US in commemorating the Fourth International Polar Week.  The designs are not identical, the two US 41¢ stamps depict aurora, but all countries issued their stamps on February 21st. 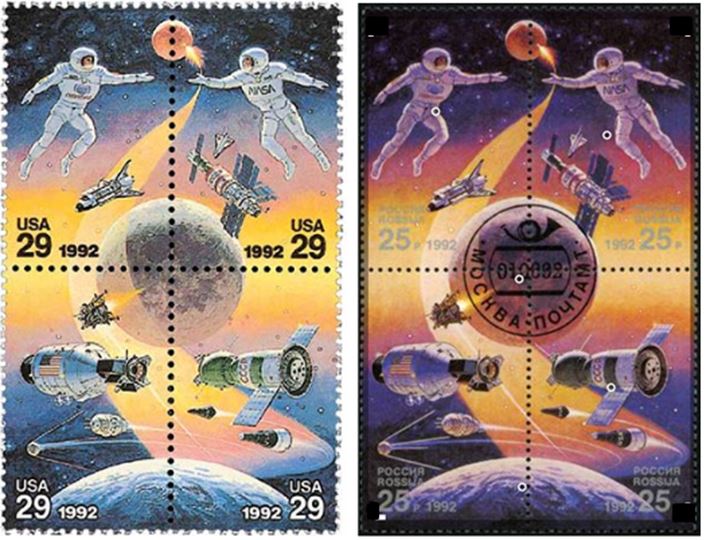 I’m not sure I have a favorite among the US joint issues, but the 1992 joint issue with Russia honoring the two countries “Space Accomplishments” may be the most interesting. After decades of competition, some may have been surprised to see such an issue even though the countries had begun to cooperate on the Space Shuttle by this time.