It was the final day of the Wayne County Gem and Mineral Club’s eight-day trip to Kentucky and beyond.  We had spent Labor Day weekend with the Catawba Valley Gem and Mineral Club in central Kentucky collecting calcite, dolomite and a bit of fluorite in two quarries and quartz geodes from a tributary of the Green River.  We also had lots of Kentucky brachiopods, Tennessee crinoids and Virginia staurolite packed into just about every available spot in the car.  But the trip home from Lexington, Virginia would only take 8 hours, plenty of time to make one quick stop.

Linda Schmidtgall and I decided our final stop would be just 5 miles east of Interstate 81 in Rockbridge County, Virginia.  Beard (2017) stated that Little Marys Creek “is one of the best places in Virginia to collect unakite”.  We thought we would find out if he was correct.

Many New York collectors know about unakite, having collected the metamorphosed granite at the Valentine Mine in Harrisville, NY.  In fact, I have written about unakite and that Adirondack location in the August, 2017 WCGMC newsletter.  We thought it might be interesting to compare New York’s unakite with the best Virginia has to offer.

The site was easy to find.  Route 56 enters George Washington National Forest at a bridge over Little Marys Creek and parallels the creek for more than a mile.  The land west of the bridge is private property, but one can walk the creek east into the National Forest.  The creek is strewn with rocks of all sizes.  Most are schist, gneiss or granite.  Nice rocks, but not what we were seeking.  At first, it did not seem like we were going to be successful.  But once the first piece of unakite was found and our eyes adjusted to the appearance of the altered epidote we were able to find several pieces.

The green epidote was altered brown on the surface and the best way to find unakite was to look for orange feldspar and carry a big hammer.  When a unakite rock was broken the green epidote was immediately evident.  It is very evident why unakite is a desired lapidary stone: orange and green minerals of equal hardness which take a nice polish.

We spent about an hour gathering up a few and headed back to the car.  At this point, Linda spotted a large black bear rambling across the road just behind our vehicle  He disappeared before I arrived with the largest unakite boulder and my Nikon.  We will just have to take Linda’s word that she saw a bear and not a woodchuck! 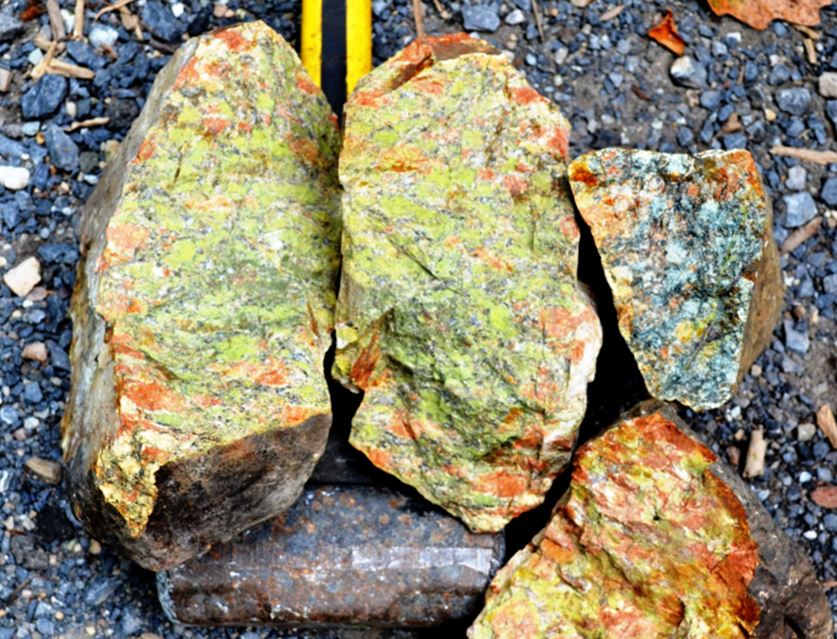 After confirming that the bear had moved on, we broke the largest piece (so we could share it!) and I captured this field shot. 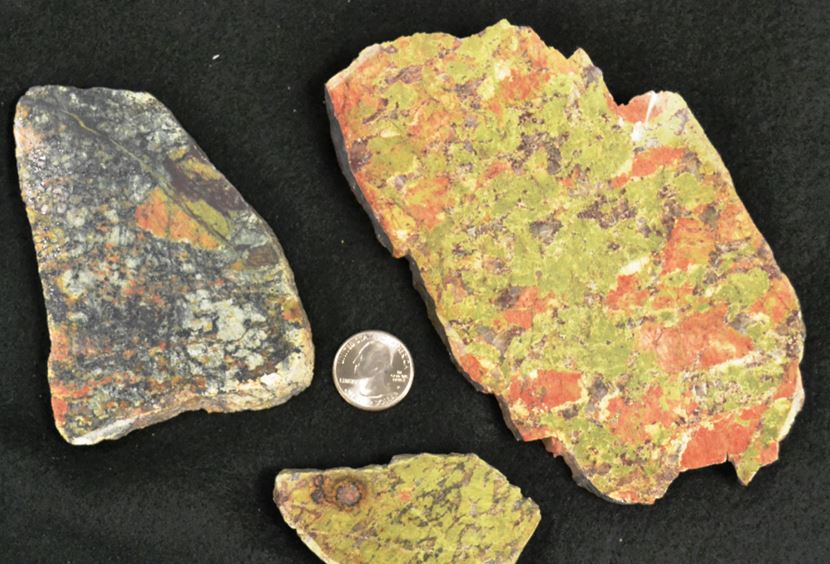 We sliced up some of the Virginia unakite at the club’s September workshop. The largest piece in this photo is from one half of the piece in the field photo above. In addition to being a geologically interesting rock, it is indeed a pretty rock.