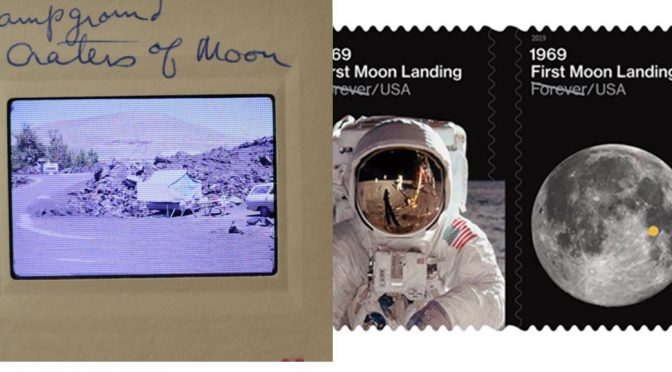 Later that evening the sky was clear and the moon was just a couple of days from being full.  We lay in the campground staring skyward.  It was probably not possible for a boy about to enter high school to comprehend the enormity of what was occurring on that desolate sphere of rock some 240,000 miles away.  I don’t think I fully comprehend the enormity even today. 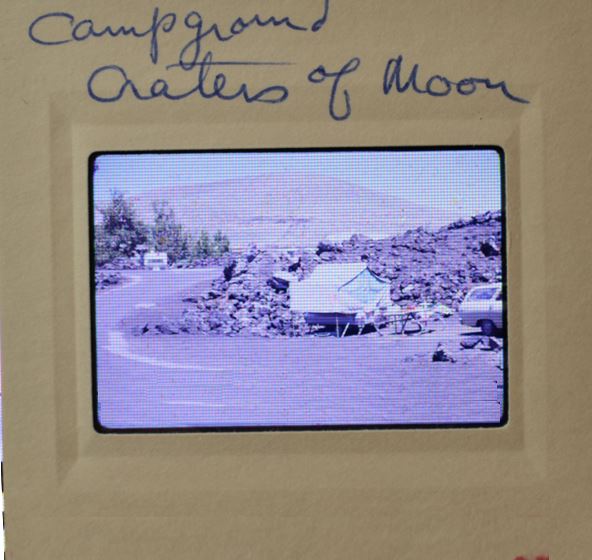 This is a photograph of a Kodak slide my father took on July 20, 1969 of our campsite at Craters of the Moon. You can see our Apache pop-up tent trailer right in the lava field. I only wish my dad had wanted more people in his slides. He took over 20 pictures that day, but I am in none of them!

But to imagine that I was camping with my family in a park called “Craters of the Moon” on that very day.  It was not planned that way (or so my dad says).  We were on a 5-week summer trip visiting National Parks and Monuments and, as fate would have it, our travels simply had us in Idaho that day.

Of course, Craters of the Moon National Monument technically has nothing to do with the moon.  The volcanic cinder cones, spatter cones, lava tubes and volcanic bombs there are products of eruptions that began about 15,000 years ago and ended, at least for now, just 2,000 years ago.  But the morphology of the features and the general lack of vegetation in many areas led geologist Harold Stearns to name the region “Craters of the Moon” when the nearly 500,000 acre National Monument was established in 1924.

Fifty years have passed since Armstrong proclaimed “One small step for man, one giant leap for mankind” and you can view moon rocks acquired on the Apollo 11 mission in museums.  But later this month will mark a milestone which should not go unrecognized.  Although five successful subsequent trips were made between 1969 and 1972, only twelve men have ever left footprints on the moon.

How many of you who are old enough to remember this day know where you were on July 20, 1969? 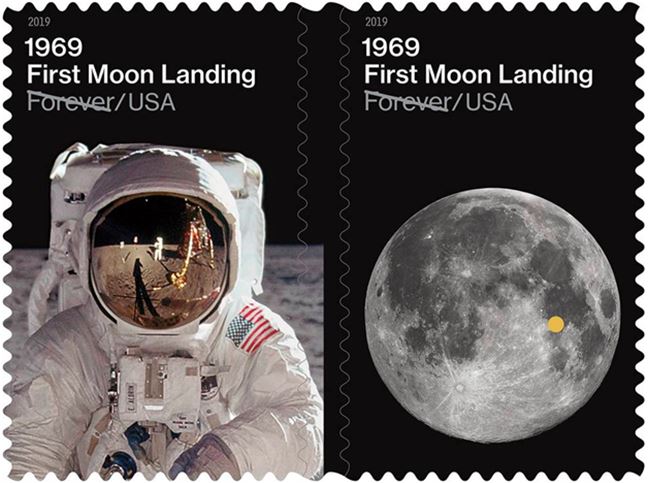 The United States Postal Service will acknowledge the event, issuing two stamps on July 19th, 2019 which honor the First Manned Landing on the moon. One stamp features Armstrong’s iconic photo of Aldrin in his spacesuit and on the moon. The second stamp marks the site of the landing, the Sea of Tranquility.