For the second consecutive year, members of Wayne County Gem and Mineral Club joined with the Niagara Peninsula Geological Society for a several day trip to mineral sites in Ontario.  We thank Ashley Pollock for organizing the trip and I thank Ashley for writing this short summary of one of the sites we visited and allowing me to publish it in the September, 2017 WCGMC newsletter and also this this blog.

It rained and then it stopped and then it rained again as we drove north to start our week long summer collecting trip.  But when we met our Wayne County Club friends at our first collecting stop along the French River south of Sudbury, the clouds had parted and the week of fun began.

The Rutter Pluton is a nepheline-syenite intrusion within/ straddling the border of the Grenville Front Tectonic Zone (GFTZ) of the Grenville Province.  The 10 km long, 2 km wide igneous body is dated at 975 million years.  Like much of the Precambrian terrain in Ontario, the igneous rocks have been metamorphosed to a gneissic texture.  Mineralogically, the pluton consists of nepheline, albite (plagioclase feldspar), potassium-feldspar, and biotite mica.  Quartz is absent.

But it is the accessory minerals that excite everyone, most of which occur within late-stage, course-grained pegmatites.  Some are considered rare and include hastingsite (an amphibole), aegirine-augite (a pyroxene), magnetite, titanite (sphene), zircon, apatite, graphite, corundum, molybdenite, carbonates, sodalite, & cancrinite.

One such known occurrence is within a small cleared area on the property of Flat Rapids Camp, who graciously permitted us access to collect for a small fee.  We thank them for allowing us access to this small, but mineralogically interesting site.

Our collecting friends from Wayne County, NY at the Rutter Pluton: from left to right: Debbie takes a “gneiss” break from collecting, Linda wonders if her find is a keeper or a leaverite, and Fred wonders what the heck he has found. Photos by Ashley Pollock

We did not find all the listed minerals for the site, but we did find really neat acicular green aegirine and bright orange cancrinite (see title photo), both in sufficient quantity for everyone to be satisfied.  Sodalite was less evident on this visit than on my only previous visit in 2011 (the sodalite in the title photo is from the earlite visit), but small splotches of the bright blue mineral were available to collect. 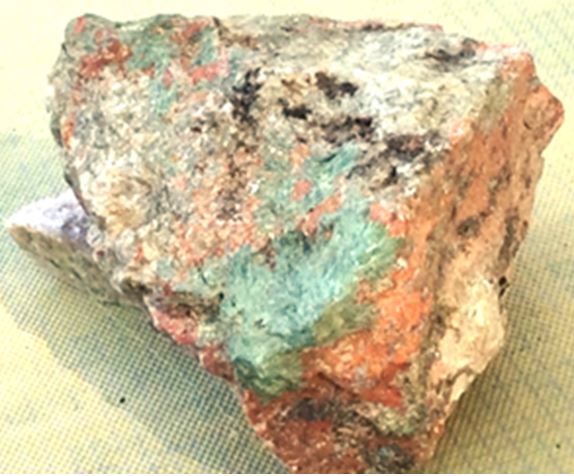 OK, the green is aegerine, but is the red nepheline or feldspar?

One mineral perplexed us some in the field and still bothers me.  The acicular sprays of green aegirine generally rest on a red mineral in the coarse-grained pegmatite, a very pretty red-green combination indeed.  In the Mindat online description of the Rutter Pluton site, the red mineral is labeled nepheline.  But there is also a grayish mineral seen in the rocks that looks more like nepheline to me.  Furthermore, Sage (1997) lists potassium feldspar as a major component of the actual location where we collected and I wonder if the red mineral from the pegmatite phase of the Rutter Pluton might be feldspar?  If anyone knows the composition of this mineral, I’d love to hear from you.

For more and pictures on our Rutter Pluton visit, see Ashley’s 8 page post to the WCGMC club Facebook page.