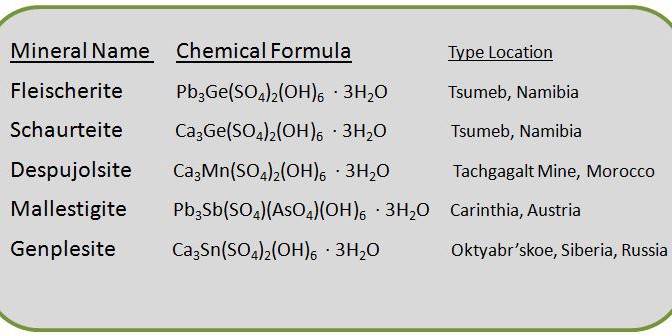 Despujolsite, Mallestigite, Schaurteite, Genplesite:  OK, if you are honest with yourself you will admit you have never heard of these minerals.  I hadn’t.  And therefore you would not know that they are all hexagonal sulfates within the Fleischerite Group of minerals.  But naturally there is even more about them you do not yet know but should!

The group is named for the first of the five current accepted group members to be identified.  Fleischerite was described and accepted as an official mineral in 1960 after its discovery in the mineral-rich, dolomite-hosted, karst breccia plug of the Tsumeb deposit in northern Namibia.  Like other members of the group, fleischerite crystals form as dihexagonal dipyramids.  While seldom large, they are definitely a worthy addition to anyone’s micromount collection, particularly if they can be documented to be from the type locality of Tsumeb.  When calcium occupies the larger position in the lattice, the mineral is schaurteite, another mineral discovered at Tsumeb.

The most collectible of the Fleischerite Group minerals is undoubtedly despujolsite.  No one who collects sulfate minerals should be without one!  It takes manganese (Mn) to grow despujolsite.  Although the type locality is in Morocco, the world’s best crystals come from the N’Chwaning Mines of the Kalahari manganese field in South Africa.  This locality is best known for its world class deep red rhodochrosite (MnCO3), but it is also the host for a significant number of rarer manganese minerals.  Most were formed about 1.3 billion years ago when manganese-rich sedimentary rocks over 2 billion years old were cooked at temperatures approaching 475°C by hydrothermal fluids. 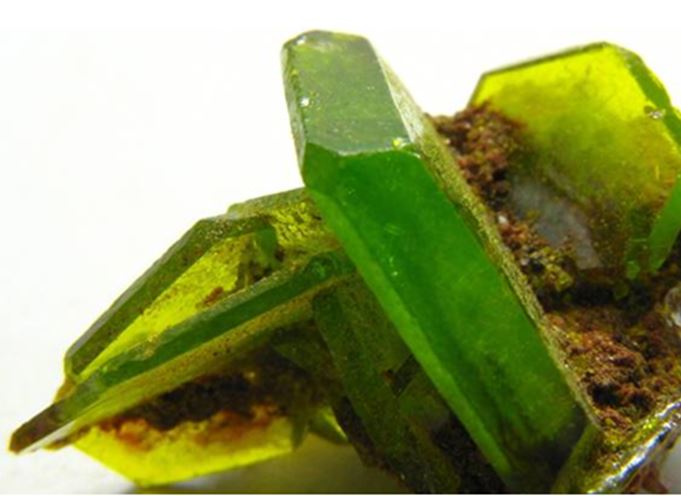 Despujolsite is a brilliant green color and forms tabular ditrigonal dipyramids that are often found standing against iron-stained reddish matrix.  Most specimen are small (micromounts to thumbnails), but you can expect to have to part with several Ben Franklin’s to obtain one with crystals approaching a centimeter.  Which I guess is why most of us settle for selenite, celestine, and barite to satisfy our need for sulfate minerals.

Mallestigite is a secondary mineral formed in the lead-antimony mines of south central Austria.  Clear white acicular crystals spray into open vugs in the host limestone, but micromounters only for this one.

And finally, genplesite is the newest approved member of the group, receiving official mineral status just two years ago.  Genplesite is the only recognized tin sulfate mineral. I could find no picture of this mineral which was found in the tin deposits of far eastern Russia.

And yes, fleischerite is named after Mike Fleischer, the mineral chemist who published the first 7 editions of “Fleischer’s Glossary of Mineral Species”.  He was also the co-founder of the International Mineralogical Association (IMA), the governing body on accepting new mineral species. 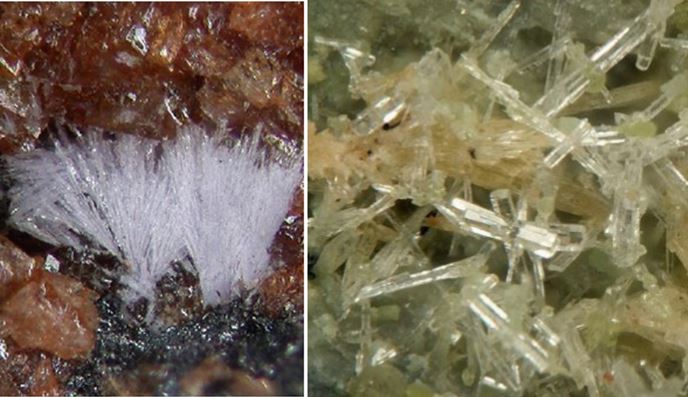 Fleischerite (left) from Tsumeb, Namibia and Mallestigite (right) from Austria. Field of view in both photos is less than 0.3 mm, true micromounts.