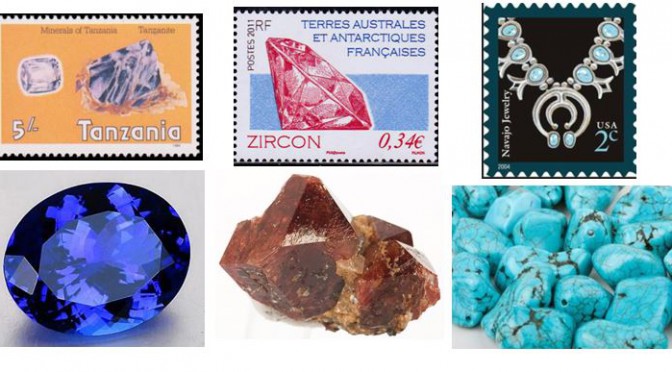 December is a month when many things are overdone.  Stores are open 26 hours per day, sales offer discounts on discounts (or so they claim), foods have more calories and portions are larger, etc.  With all these other excesses, I suppose it should then be no surprise that December would outdo all other months by having three official birthstones.  Zircon, turquoise, and tanzanite are all recognized birthstones for the final month of the year.  I guess we had better get started. 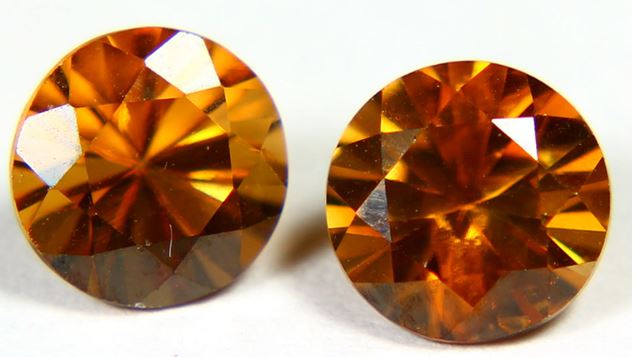 Hyacinth is a name often used in conjunction with gem quality yellow of brown red zircon such as this pair of 3.4 ct round cut gems from Cambodia.

Chemically and structurally, zircon (ZrSiO4) is a simple mineral, a nesosilicate where individual silica tetrahedral (SiO4) are linked by single atoms of zirconium (Zr).  The brownish-reddish crystals are tetragonal, often with prismatic and bipyramidal faces.

Zircon is an accessory mineral in many igneous rocks, particularly granites and syenites and associated pegmatites.  Hard (7.5 on Mohs scale) and chemically resistant zircons survive weathering and can be found in alluvial deposits.  Because of zircon’s density difference from other minerals (it is almost twice as dense as other silicates) zircons released by erosion accumulate with other heavy minerals where they can be recovered.

Zircon is the principal source of the world’s zirconium.  With its extremely high melting point, synthetic zirconium oxide (ZnO2) is used in many high temperature applications such as nuclear reactors and ceramic crucibles.

This pair of 2011 stamps from the French Southern and Anarctive Territory demonstrate the natural occurrence of zircons embedded in host granite (left) and a cut gemstone (right).

In addition to being a December birthstone, zircon has a neat distinction.  Zircon crystals are resistant to weathering and chemical alteration and they contain uranium.  This allows most zircons to be dated by measurements of the amount of lead generated by radioactive decay of uranium.  It is not easy and some zircons resist analysis if damaged, but zircons permitting such work have proven to be the absolute oldest datable minerals on earth.  Ages of 4.4 billion years have been recorded in zircons from Australia.  Zircons this old are “only” a little more than 100 million years younger than the currently accepted age of our planet.

One glance at the brilliant blue gem tanzanite from central Africa and it is clear why this gem variety of the mineral zoisite was added as a birthstone in 2002.  Although a bit softer than most other valuable gemstones, the vibrant color and overall scarcity of tanzanite (6.5 on the Mohs scale) adds to its appeal. 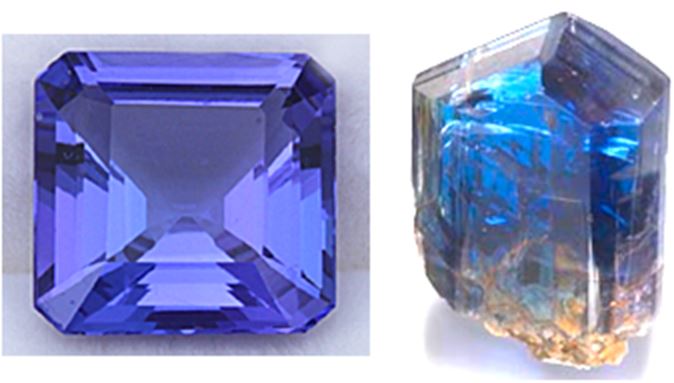 Tanzanite: On the left, a 4.03 ct Asschur cut gemstone. On the right, a natural raw terminated tanzanite crystal. Which would you prefer?

The mineral zoisite, itself a member of the epidote group of sorosilicate minerals, has been a known and well defined rock forming mineral for centuries.  But the blue and gemmy variety now known as tanzanite was not discovered until 1967 when a farmer in the Merelani Hills area of Tanzania encountered them while tending livestock.  It turns out that the blue color is imparted by a very small amount of vanadium in the crystal structure. 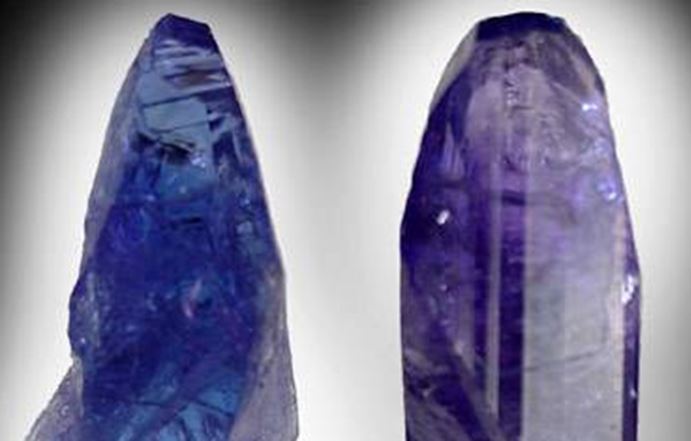 Tanzanite has its own unique property. It is very strongly pleochroic, that is it will display different colors when light passes through different crystal directons. This is the front and side (90 degrees) of the same tanzanite crystal viewed with the same light source. Now imagine a gemstone cut from this stone!

If you own tanzanite you may want to hold onto it.  The mining areas in Tanzania have been nationalized and a study in 2012 estimated that at the current rate of production (~2.7 million carats/year) the tanzanite deposits may deplete in about 30 years.  Of course, exploration for additional tanzanite will likely continue.

Another magnificent blue mineral, turquoise is actually a copper phosphate, or more specifically it is a hydrated hydroxyl phosphate of copper and aluminum.  The formula is:  CuAl6(PO4)4(OH)8·4H2O. Turquoise forms as a secondary mineral in veins and fissures in arid regions.  Although crystalline turquoise is extremely rare, the deep sky blue color of turquoise and its propensity to polish smoothly has led to its extensive use in jewelry.

While tanzanite is a recent discovery, turquoise dates back as far as 3000 BC.  Early evidence of its use comes from Egytpian tombs.  Notably, King Tut’s tomb was extravagantly adorned with turquoise.  By the 13th century turquoise dug in  Persia (Iran of today) was treasured throughout much of Europe.  Meanwhile pre-Columbian Native Americans mined the colorful mineral in the desert southwest and used it in sacred ceremonites to commune with the spirit in the sky.  However, the unique combination of turquoise into silver jewelry did not originate until the late 19th century.

Turquoise: With a hardness of 5-6, turquoise is somewhat durable, but soft enough to polish easily. The raw vein style turquoise on the right is from Morenci, Arizona.

Turquoise is often found in association with another light blue secondary copper mineral, chrysocolla, and it can be hard to tell them apart.  Chrysocolla is a hydrated sheet silicate mineral with the formula:

Cu2-xAlx(H2-xSi2O5)(OH)4·nH2O.  It is not stable and is also generally too soft and too brittle for lapidary use.  Thus, it is important to be able to distinguish turquoise from chyrsocolla.  Enter the lick test!  Chrysocolla is hydrophillic.  Therefore it will feel sticky or tacky if licked.  Turquoise will not.